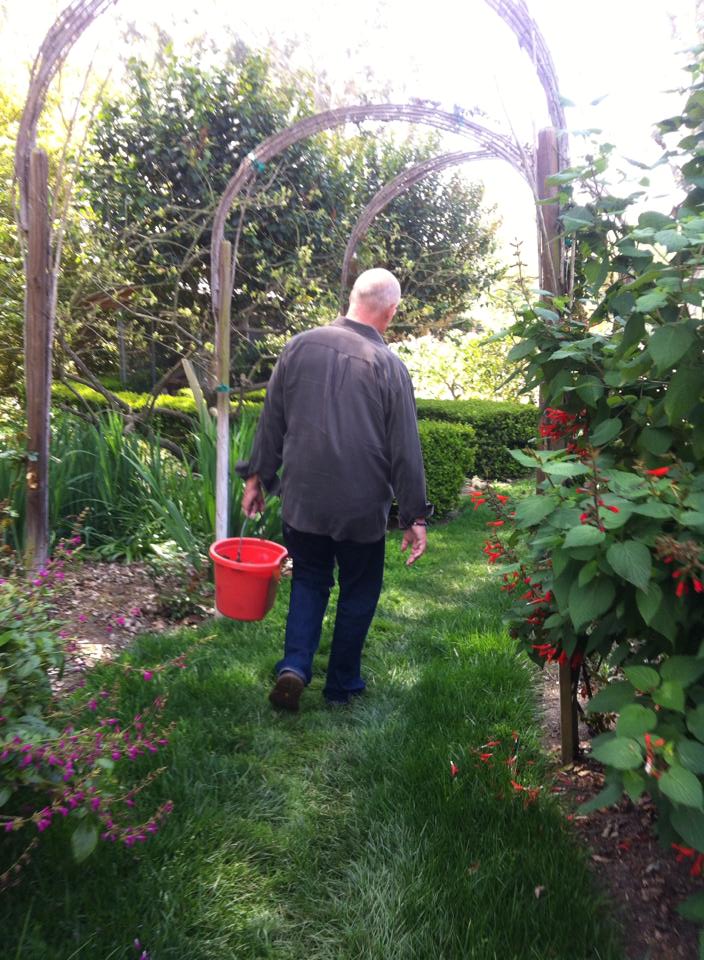 So much has already been said about San Diego environmental reporter and author Loren Nancarrow following his death from brain cancer at age 60 last week. The feelings of loss and sadness expressed by so many people were a tribute to how much of an impact he had made, probably more than he realized.

Loren was one of the first members of the San Diego media to recognize the importance of rethinking our relationship to the environment and nature. It went beyond just the general gardening tips and maybe water use tips that you would read reports about or see on TV from time to time. He truly understood that we had to get serious about the human impact on Planet Earth, and do whatever we could as individuals to change our habits.

Loren was one of the first to bring the camera crew and do a short piece on our work here conducting trials and demonstrating different green roof and living wall systems. Of all the reporters we’ve worked with over the years, he was clearly the most curious and most interested by the volume of questions he asked me. It was a great segment.

While it seems like a no-brainer now, people who talked about organic gardening, graywater recycling, and really crazy stuff like growing gardens on roofs and walls not so many years ago were thought of as extremists or kooks. The average person couldn’t relate to these ideas. No one was going to give any precious TV news time to them.

But Loren had a way of making people pay attention and care about the environment. Even TV news directors. He started with something most people knew about and enjoyed, suggesting simple changes in gardening techniques like killing pests with natural methods rather than chemical pesticides. He used his platform reporting on weather to report on the natural world around us. Eventually he brought his viewers along in thinking about bigger concepts.

Loren believed like I do in the healing properties of plants and bringing the natural environment into our everyday urbanized lives. Not long after finding out he had cancer, Loren expressed his desire to help cancer patients heal and thank everyone at Scripps Health who cared for him. Loren had found comfort and inspiration in the new rooftop healing garden at the Scripps Radiation Therapy Center off Torrey Pines Road. Loren and his family began raising money to build out the garden and benefit Scripps cancer patients. If enough money is raised, the entire garden will be named in his honor, “The Loren Nancarrow Healing Garden.”

I am wholeheartedly behind this effort. I was fortunate to work on the installation of a green roof and garden at Sharp Memorial Hospital, visible to patients outside their windows high above the street. While green roofs have many benefits, in a health care setting green roofs provide even more benefits. According to the American Horticultural Therapy Association, the benefits of therapeutic garden environments have been known since ancient times. In the 19th century, Dr, Benjamin Rush, the “Father of American Psychiatry,” asserted that garden settings hold curative effects for people with mental illness.

Working on the Sharp Memorial green roof project remains among the most meaningful projects of my career. It’s amazing to stop and think that our green roof project may someday help people recover faster from surgery, use less pain medication, heal more easily and go home earlier. Loren understood this first from his perspective as an environmental reporter, and then unfortunately as a cancer patient.

If Loren’s work touched your life or inspired you in any way, please consider a donation to the Loren Nancarrow Healing Garden. You can learn more and make your donation at this link.

It really doesn’t seem like enough to say thank you, Loren. But – thank you. We will try to carry on your efforts.