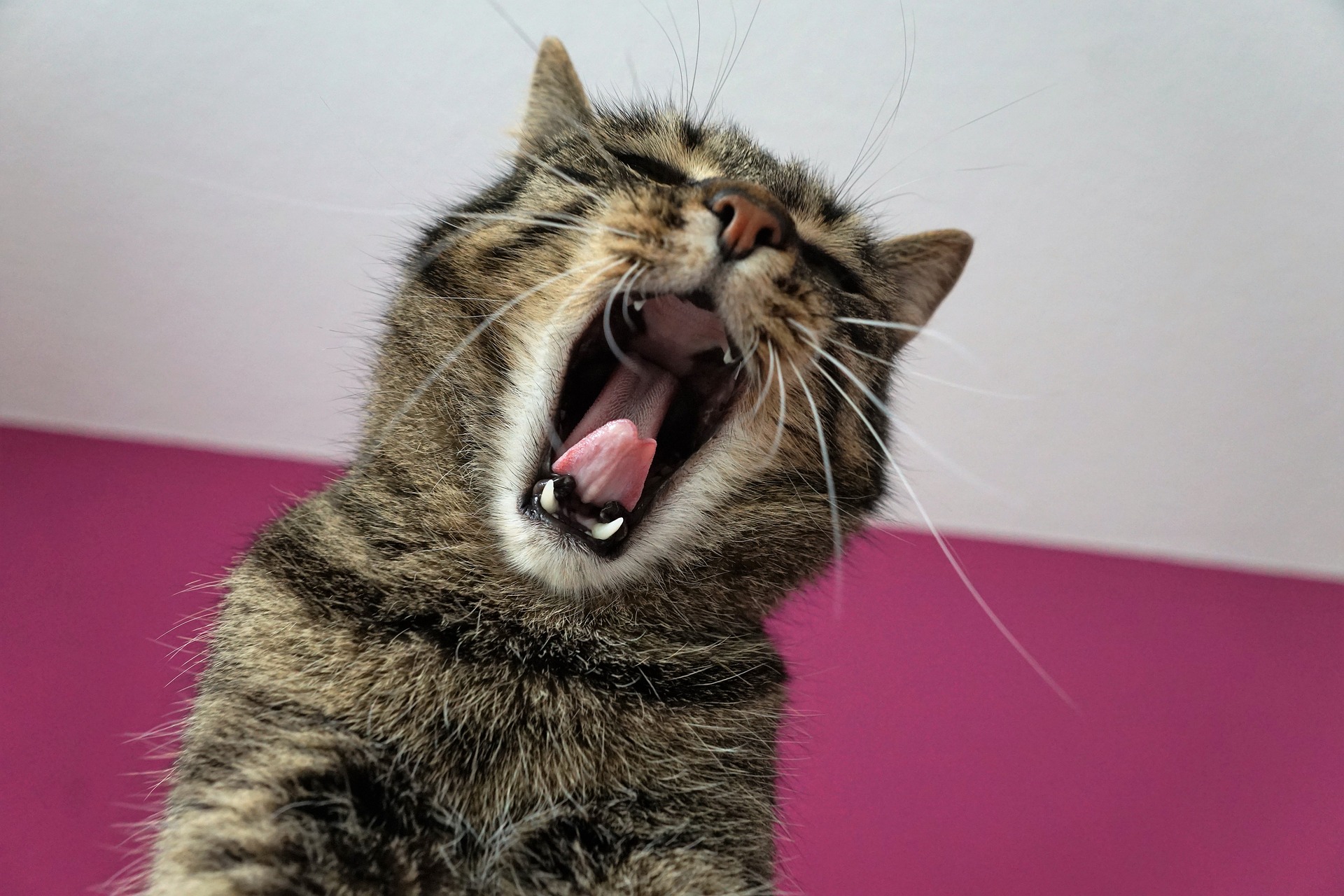 Have you ever felt that post-lunchtime slump at work, around 2 p.m.? You probably blamed it on the California burrito you ate, or a morning coffee crash. The more likely culprit turns out to be carbon dioxide.

A research study conducted earlier this year by Harvard, Syracuse, and SUNY Upstate Medical Universities studied office environments and determined the level of carbon dioxide in the average office environment reaches its daily peak around 2 p.m. The CO2 level of 1,000 parts per million is 2.5 times the level of carbon dioxide in the outside atmosphere. Read more about this study in the Harvard Business Journal. 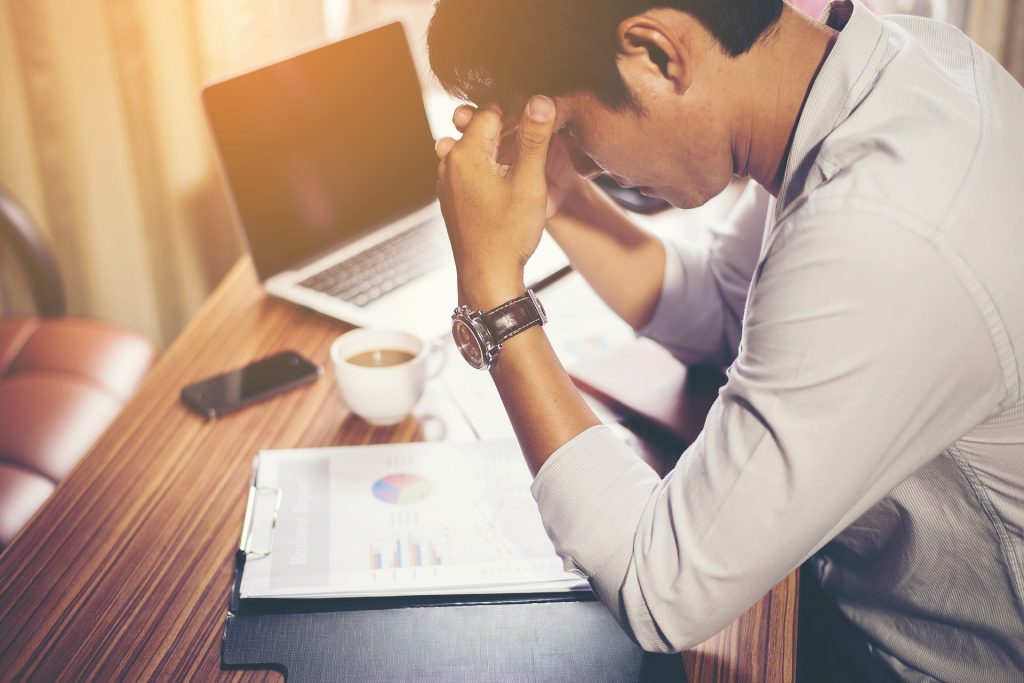 Ever find yourself dragging at work mid-afternoon? The air you’re breathing might be to blame. Photo: Creative Commons license

If you find your attention drifting after spending an hour in a meeting, it’s not because the boss is droning on again. Meeting room CO2 levels are even worse offenders, reaching 3,000 parts per million – this is 7.5 times the standard atmospheric level.

These levels are high enough to affect employee productivity by 15 percent on a regular basis.

People concerned about modern building design are beginning to realize the similarities between sealed office buildings and spacecraft. Scientists designing multiyear missions to Mars and beyond are dealing with similar problems: managing light levels, temperature, humidity, and air quality.

The goal for spacecraft is survival. The goal for office design is worker productivity. Productivity might not seem like a life and death issue, but if you place it at the center of an employee’s ability to make a living and support his or her family, it’s pretty important stuff.

So here we have rocket scientists and architects working to find solutions to the same problems. Here’s where your humble horticulturist and Eco-Warrior realizes that I AM as smart as a rocket scientist, because there’s an answer to the CO2 problem. It’s living plants! As you might remember from your middle school science class, plants take in carbon dioxide during the day and use the energy in sunlight to convert CO2 plus water to sugar and oxygen. Plants use the sugar for energy, and release oxygen at night. Voila, we have photosynthesis! 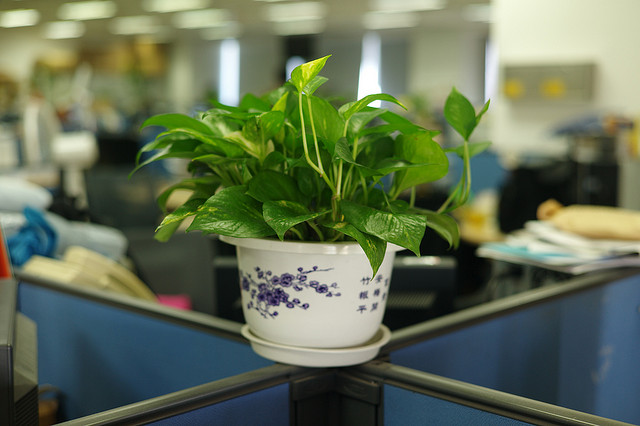 An article in the October 9 Wall Street Journal’s technology column discusses workplace productivity and talks about the attempts to establish new building standards based on this scientific research. Builders, landlords, and companies use green building standards like LEED certification as selling points. China uses a standard called the Reset Standard, focused on air quality since the outdoor air quality in many large Chinese cities is so poor. The City of Baltimore mandates new construction follow the International Green Construction Code.

It’s great to see how many scientists are doing complex research on this topic. The scientific proof is helpful of course. But the benefits of plants, especially in the workplace, is something we’ve been talking about and writing about here for years. You really don’t have to wait for any more proof to give Indoor Plantscaping a try in your workplace to see if you can improve employee performance, morale, and wellbeing. 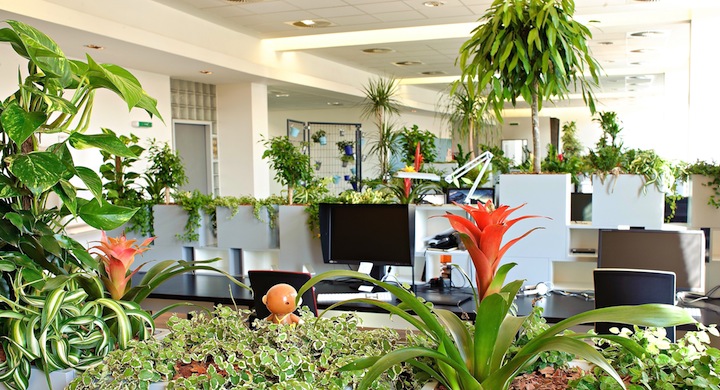 This office in Spain has embraced plants in the workplace in a big way.

The recent Harvard study found breathing better air led to significantly better decision-making performance in the workplace. Workers had improved cognitive function when the carbon dioxide rate was lowered, especially in strategic thinking and crisis-planning and response skills. These are exactly the skills needed to be productive in today’s knowledge-based economy.

While the jury is out about just how many toxins plants can remove from indoor air, there is no dispute about the ability of plants to reduce the carbon dioxide level indoors. Just returning the CO2 rate to the “normal” rate of clean outdoor air could prevent the negative impact on productivity we mentioned at the beginning of this blog post. Who wouldn’t want to improve productivity when time is money in the workplace, and when productivity reflects improved worker wellbeing?

To give you a few ideas, this is our favorite infographic from NASA on top choices for plants that improve indoor air. 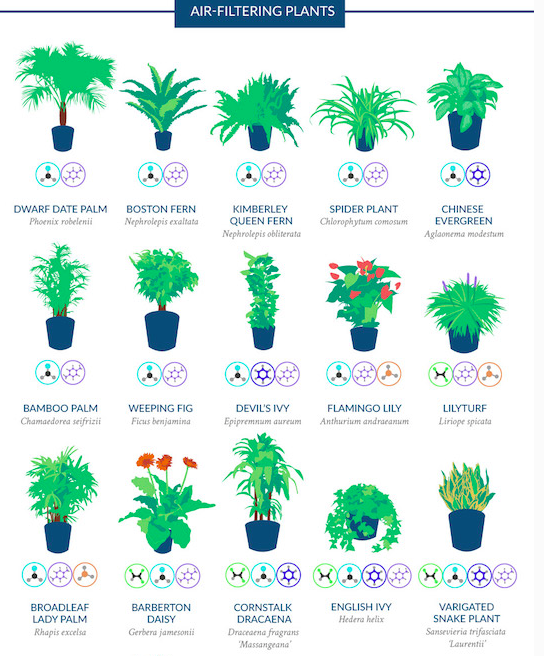 NASA’s list of the most efficient and effective plants for purifying the air.

If you’d like help installing top quality plants in your workplace and having professionals take good care of them for you, call Good Earth Plant Company and let us put together a Plantscaping design program for your workplace.