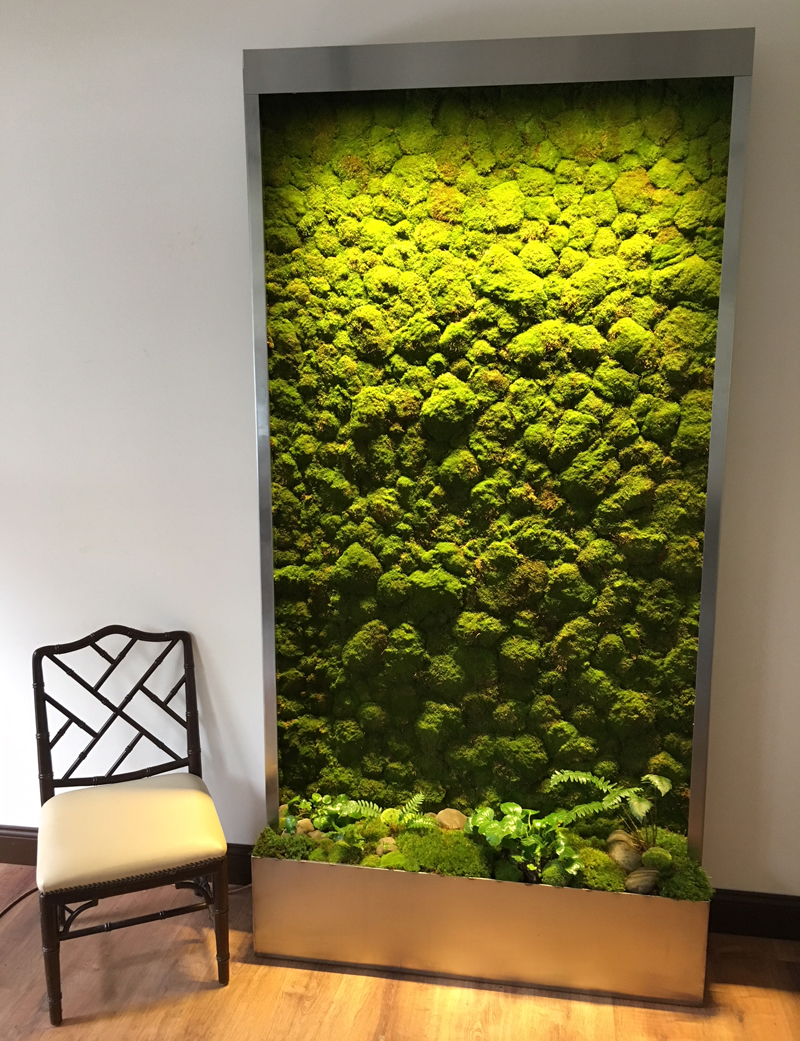 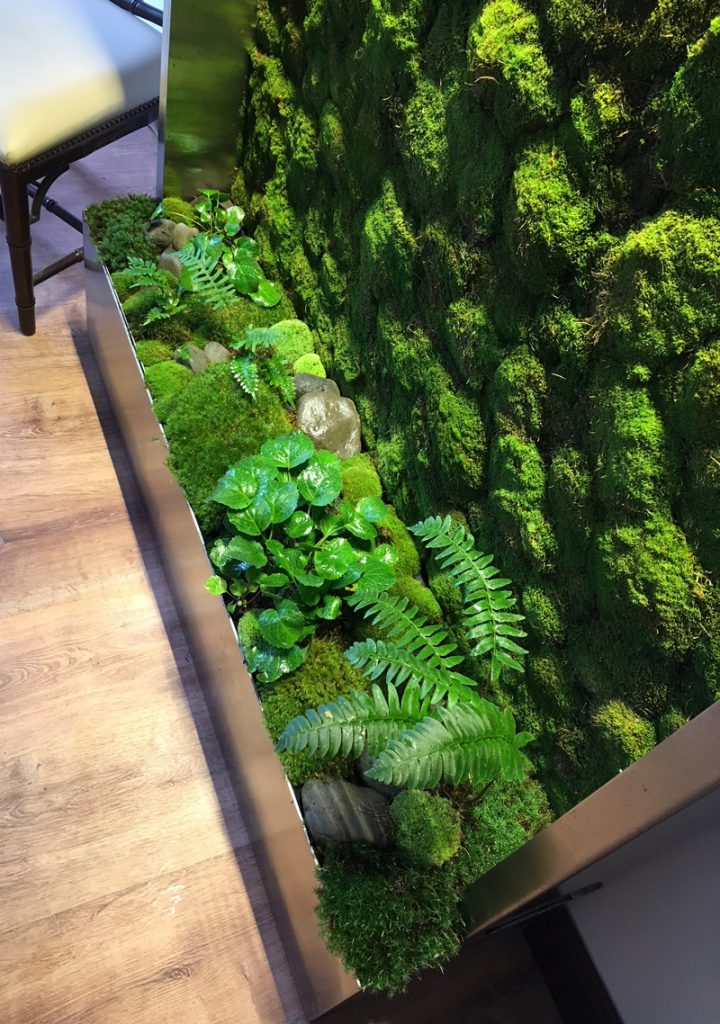 A close look at our beautiful new living moss walls, which will be available later in 2018 at Good Earth Plant Company. We can also add ferns and other plants to the base like in this example.

During my 40 plus years bringing nature into workplaces, homes, and many other places, there have only been a handful of game changer type products or concepts. Even though I came around more recently to building green roofs (2007) and living walls, (2009), their origins go back thousands of years. The modern versions of  green roofs were developed in Germany in the 1960s, and living walls in France in the late 1970s. Since then, they have spread to most countries.

This changed a few years ago when “moss walls” came along. Four years ago, we installed our first moss wall using preserved lichen (the same material used in model train sets) and they have caught fire with our clients and the rest of the world. They LOVE them. Moss walls provide most of the benefits of traditional living walls and a few distinct advantages.

First, they look great  in nearly any indoor setting. Growing conditions don’t have to be ideal or even close to it. While the moss is a natural product, it’s not actually alive. We use preserved living materials. As a result, our moss walls don’t need any light or water, and a bare minimum of maintenance. This allows us to use different types of moss, different textures and shapes. We can fit a moss wall into nearly any space as they are lightweight and only protrude from the wall just two or three inches. The color combinations are infinite, including those not naturally occurring.

So – what’s not to like? But there are some people who would really love to have a moss wall that is truly alive, made of living moss plants just like a traditional living wall is made of real, growing plants. We are often asked to create a “living moss wall” by clients for all types of locations in Southern California. Moss will sometimes grow on our traditional living walls in shady locations without even trying. But trying to encourage a moss wall to grow by design is extremely difficult.

One of the main reasons: Southern California tap water is too salty. To successfully grow a moss wall inside or outside, we need to rely on primarily rainwater. If we employ rainwater harvesting techniques, it’s theoretically possible. But for practical reasons, providing a large enough storage tank can be challenging.

Many people have been experimenting with living moss walls and even roofs. I’ve been keeping an eye on their efforts, and in particular a friend of mine in Pennsylvania. So far, there hasn’t been a product I liked enough to offer to our clients.

One of the new living moss walls which will soon be available to our clients at Good Earth Plant Company.

We won’t offer a product I don’t have 100 percent confidence in backing. There have been problems with irrigation technology, which hasn’t caught up at a decent price point. In more humid climates they can work, but in the arid Southwestern United States, they don’t flourish. And we haven’t been too thrilled about their long term appearance. It’s a little like calling someone else’s baby homely.

But perseverance pays off.  My buddy Al has finally developed an indoor living moss wall and cabinet that works and looks great. He is using what is commonly called “sidewalk moss,” but for horticultural folks, it’s Bryum Caespiticium. I’m excited to bring this option to our customers who’ve been asking us for a living moss wall and not a preserved one. We will have a demonstration unit at our Good Earth Plant Company living lab around Thanksgiving. 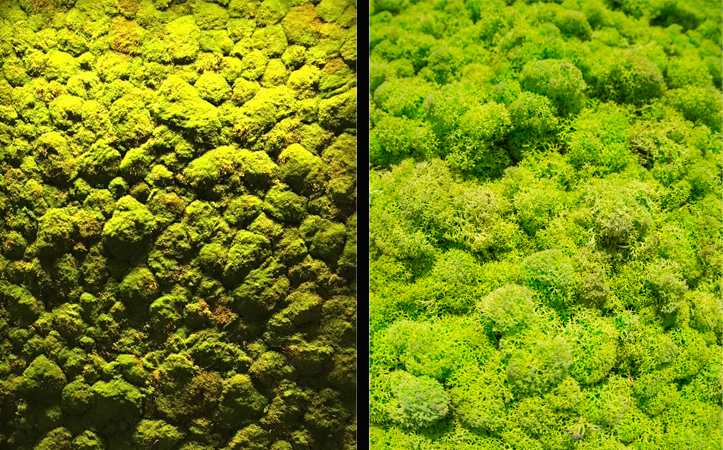 A close-up side by side look at a living moss wall with a preserved moss wall. Can you tell which is which? The answer is at the end of this blog post..

These units are self-contained, including a 15 gallon water tank and grow lights so they can be installed without having to worry about having enough natural light or access to an irrigation line. They have a built-in control system to provide misting for 15 seconds multiple times a day to allow the moss to flourish. These systems are similar to the ones used in grocery stores to keep the produce fresh. We are recommending an add-on filter, or it can be loaded with distilled or purified water so we don’t have to deal with the saltiness issue. Ingenious! 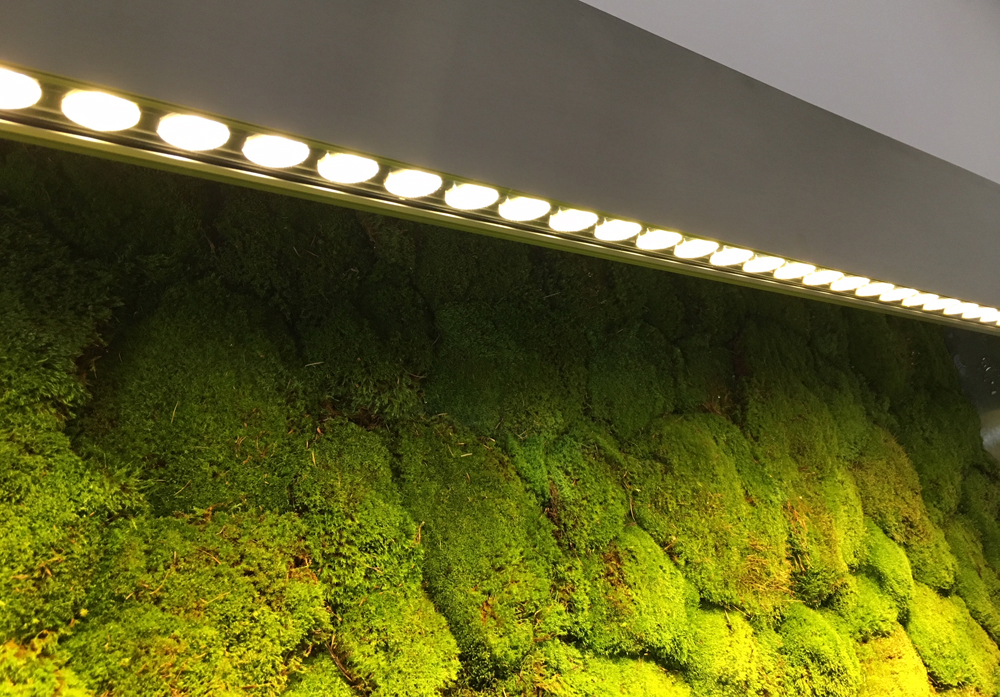 The new living moss wall units have grow lights built right into them.

If you want one, normal lead time will be four to five weeks. They are priced at $7,500 including delivery and set-up. Best of all they come with a lifetime warranty.

Moss wall popularity shows no signs of slowing down. We’re even adding replica plants and drift wood for additional interest and elements. They’ve become the ideal solution for so many clients who want some kind of green wall to bring nature into the built environment. 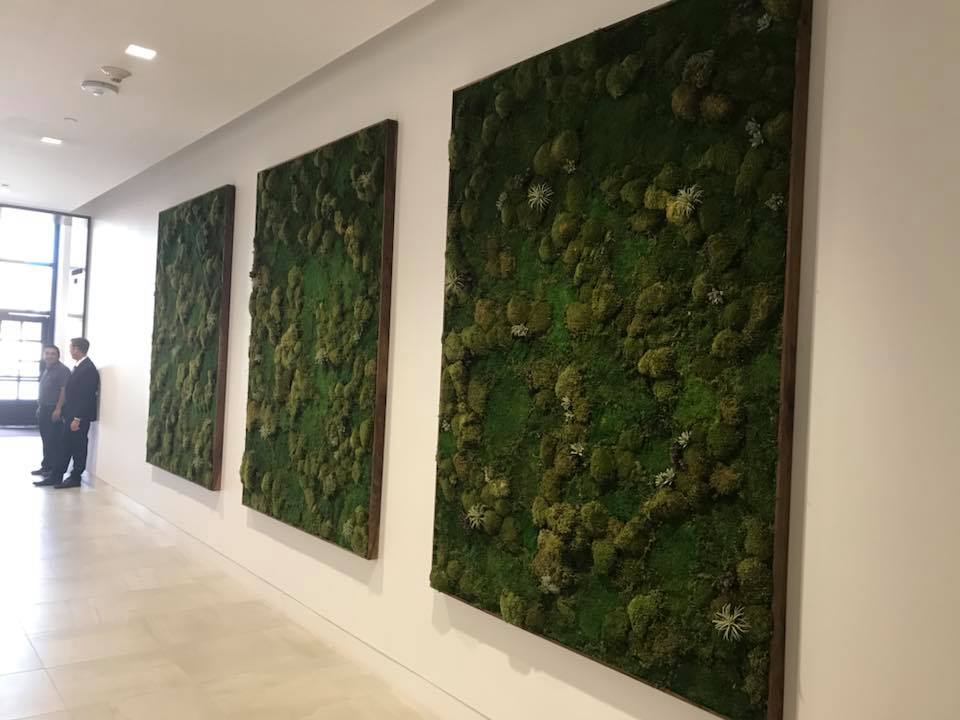 These preserved moss walls in a La Jolla building’s lobby have added elements of biophilic design using replica plants with the moss.

Now we will have another terrific option with the living version. Future versions will be custom built, and I expect them to become viable for an outside location. I predict they will be nearly as popular as the preserved versions. It will be fun to watch this part of our business grow.

To see our interior living moss wall cabinet, please call 858-576-9300 or email Erin@GoodEarthPlants.com for an appointment at our conveniently located Kearny Mesa showroom.