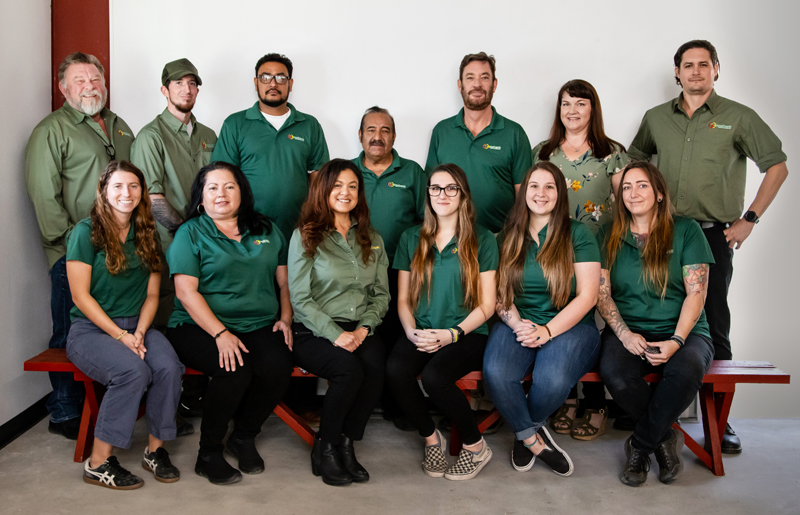 Our amazing Good Earth Plant Company team, the best in the business. 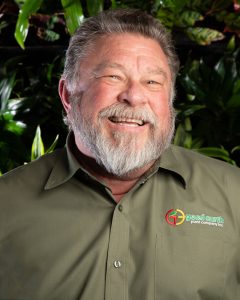 Jim Mumford began his career in 1977 with the opening of Good Earth Plant & Flower Company, a flower “bucket stand” in downtown San Diego.

More than four decades later, Mumford’s advocacy for bringing nature closer and enriching peoples’ lives with plants is central to his business and personal success. 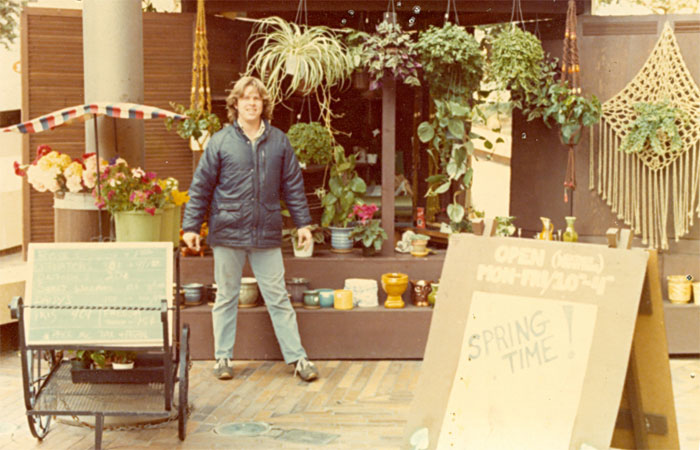 Sought after for his expertise in designing and installing green roofs, living walls, moss walls, replica walls, and for improving workplace environments and employee wellness through plantscaping, Jim Mumford is acknowledged by industry peers as one of its most enthusiastic and knowledgeable leaders.

In 2003, Mumford’s home in eastern San Diego County was destroyed by the Cedar Fire. Mumford reconsidered his focus and applied his skills to the potential for larger-scale biophilic design projects including green roofs and living walls to add to what he already knew about sustainable building. At their heart, green roofs and living walls are simply new ways of putting plants in containers and integrating them onto buildings.

Inspired by building the first commercial green roof using his own building as a successful example after being told it couldn’t be done in Southern California, the Good Earth headquarters now houses a talented team of horticulturalists, designers, installers, and technicians who share the Good Earth Plant Company passion for a simple, meaningful mission: making people happy with plants.

In a post-pandemic world, the new focus on the health of indoor environments puts Mumford’s lifelong work in focus. In conjunction with a group of workplace greenery professionals known as the Silverado Roundtable, the group produced a 2021 white paper titled The Nature of the Post-Pandemic Workplace, offering a new vision of the modern American workplace facilitating biophilic design-oriented spaces where people can gather, collaborate, and thrive.

Mumford is a sought-after speaker and a recipient of numerous industry awards. He was named a California “Entrepreneur of the Year” by Governor Arnold Schwarzenegger; one of San Diego’s “Top Influentials” by the San Diego Daily Transcript; and one of the “Most Influential Business People“ by the San Diego Business Journal. He was a featured speaker at the TED Youth Conference in San Diego. His weekly blog has been named the “Best Topic Based Blog” by the San Diego Press Club for four years (2018 – 2021) in competition with full-time professional journalists. 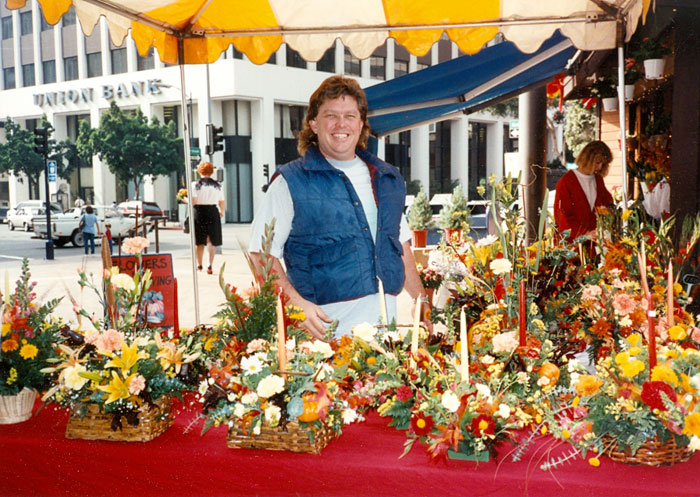 Jim Mumford started his career as a florist. We love the mullet.

Mumford contributes his expertise in a variety of roles. He is a past president of The Plantscape Industry Alliance and current board member of Green Plants for Green Buildings (GPGB); and is an active member of the International Facilities Management Association (IFMA), American Institute of Architects San Diego (AIASD), and the American Society of Landscape Architects (ASLA). Mumford served on the Downtown San Diego Partnership’s Sustainability Committee.

Jim Mumford brings skill, creativity, and beautiful, healthful environments to local and national clients including hospitals, resorts, universities, restaurants, and private homes. It’s for all these reasons he was named an “Eco-Warrior” by San Diego Magazine.

Mumford is a longtime San Diego resident. His son Ted and daughter Allie are the inspiration behind his desire to leave a sustainable world for the next generation. 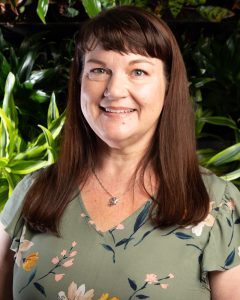 Erin Lindley brings 25 years of experience in a variety of office administrative and supervisory roles to Good Earth Plant Company. A native San Diegan who has lived in East County for 35 years, Erin possesses an impressive breadth of experience which she is able to implement on a daily basis. 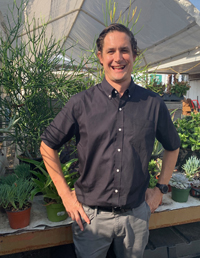 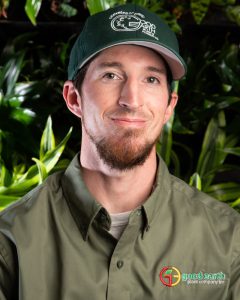 Joe Benedetti joined the Good Earth Plant Company team in 2020. He has deep roots in the Plantscaping industry. His parents own Kelly Mac Interiorscapes in New Jersey, where his interest in plants began working in the family business over the years.  Joe loves designing and installing living walls, and his favorite plants are ceropegia woodii and various kinds of peperomia. Joe is also a musician. He has been playing slide guitar for the last 15 years including venues and festivals. Bragging rights: Joe opening up for rock and roll hall of famer Johnny Winter in 2013. 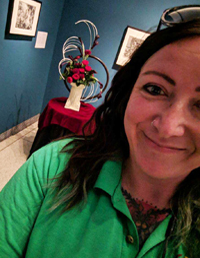 Rachel Hecathorn was originally hired in 2018 as a Horticultural Technician. Rachel has always had a talent for visual design and has put her creative skills to use in a variety of jobs including as a retail visual manager and as a floral designer. Now she puts her skills to work for Good Earth Plant Company clients on living walls, moss walls, and more  – even our award-winning “Art Alive!” displays. Rachel is a native of Illinois and has lived in Arizona and Nebraska before coming to San Diego.

Sophie with Good Earth is THE BEST...EVER!!  Our plants have never looked better, she really takes good care of them...and us - always making everything look wonderful!! We feel very LUCKY to have her!😊🌷

Joel has been our plant specialist for many years, we are very satisfied with the attention to detail. Keep up the good work. Thank you!

I wouldn't go anywhere else for plants for our office! They are so professional and know what they are doing. Their plants are always healthy and their service is excellent. I've worked with Erin (Office Manager) for several years now and she is absolutely amazing. I just love her!

I work at Qualcomm in San Diego, Sophie Gonzalez takes care of our plants here. She does such a great job and always friendly.

We have been using Good Earth for 24 years! All the plant people have been wonderful throughout the years. We now have had Scott taking care of us for the past year and he is absolutely wonderful. Kind and caring and always available to answer questions! We love him here!!!!!!

We are SO happy with the service that Good Earth Plant Company provides! This review is long overdue as they have been providing exceptional service to our two San Diego offices for many years. They have the best staff, always super friendly and knowledgeable. They clearly take very good care of their employees. We love them!!

Our company made the switch to Good Earth Plant Company about a year and a half ago and we couldn't be more happy. Good Earth won our business by being responsive and offering a great value for their services. The best part of our relationship is our dedicated service tech, Sophie. Sophie takes the absolute best care of our plants. As the facilities manager I have received numerous compliments about Sophie from our associates. She is friendly, helpful and above all caring. She takes pride in not only the plants she is contracted to care for but I've seen her care for and revive associates' personal flowers and plants. Sophie goes above an beyond and she is why I am happy to say we are clients of Good Earth Plant Company.

We have been a long-standing customer of over 15 years and that should speak for itself. I can't say enough about The Good Earth Plant Company and especially our technician, Sophie Gonzalez! Our business is considered essential so we have been working in-office throughout the year and Good Earth has been working right alongside us. It's the simple things in life and our plants have lifted spirits this year. Thank you Sophie and thank you Good Earth for taking such good care of us.

I have been using Good Earth at my company for over four years now. I absolutely love their professional service and the way that they always leave our office plants looking amazing! I have had the pleasure of working with Lisa ~ my Green Goddess as I call her for the last two years. Our plants have never looked better than when she took over our account! She has even helped me with my own personal plants at my home as COVID has turned me to creating my own garden in my apartment. Highly recommend this company hands down! Especially if you get Lisa!!!

I just wanted to give a shout out to Lisa Oliver. She takes care of our beautiful plants at Vertex. She is such a delight to see when she comes in. Always so positive. She actually has helped me out with my own personal green thumb. I definitely lights up our job site when she comes in. Very professional, witty, kindhearted person. You have done a great job on picking this employee. She has an unlimited 5 star review w/ me!!

Professionalism, Punctuality, Quality, Responsiveness, Value. Scott has been taking care of the plants at our office and does a phenomenal job! He is courteous and professional with complete attention to detail in tending to the plants & flowers. I highly recommend their services.

It has been a great pleasure working with you, and especially Joel who has that magic touch managing the plants that flourished in our suite. So I am happy to know he will continue to ensure they remain as splendid as they look today!

Sophie always went the extra mile to keep our plants looking beautiful and when there was a need for a change out, she made sure we were taken care of quickly. I always appreciated that from her. Secondly, not only was she just a vendor but she has become our friend. Thank you for all the years of service and having such an amazing green thumb!

We met briefly a few weeks ago at luncheon. I stopped to tell you what a great job Sophie does taking care of our plants here at EDF Renewables.  She is very conscientious about keeping the plants healthy and replacing them as needed.  I appreciate her passion for her job and her attention to detail. She helps keep the office looking great!

Just wanted to let you know how great Lisa is.  I know I've told you before that she is a fabulous plant technician but it bears repeating. Lisa is delightful as a person and my plants just love her.  She has been a trouper thru this terrible pandemic and extremely respectful of all our health.  Lisa always seems to go above and beyond to represent your company.

Everyone in our office appreciates your call and wants to thank you, Lisa, and the entire company of Good Earth for all of your handwork. Lisa has been a fantastic representative of your company and goes well above and beyond our expectations. Thank you for your hard work and all the heartfelt communication with us through these hard times.

I just wanted to take a moment to let you know what a great job Scott Rodgers has been doing. During this COVID-19 situation, he has been especially mindful of the social distancing, ALWAYS wears a mask for his and our protection, helpful and accommodating. He gives me a call to make sure I will be at the location to let him in. He is ALWAYS prompt, respectful and friendly! I just wanted to make sure he gets a kudos from us.

TRUST OUR LEGACY
& OUR experience