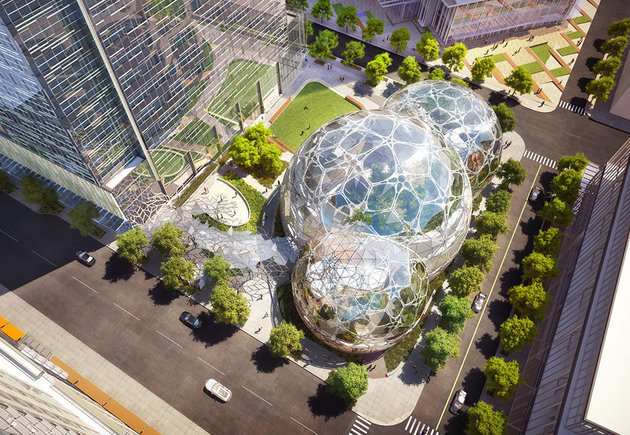 Outrageous workplace perks in the tech industry have reached epic proportions. Google has the reputation of offering the most extreme benefits.

Google better enjoy its status while it can. The new Amazon headquarters in downtown Seattle is going to blow Google’s free laundry services and the Facebook snack bar away.

Amazon is building three massive “biosphere” type greenhouses as part of its new $4 billion headquarters in the hip Denny Regrade. These three connected greenhouses will house 65,000 square feet of tropical plants, with 3,000 different species. Compare this to the San Diego Botanical Garden in Balboa Park. It houses 2,100 species of plants in just under 20,000 square feet of space. 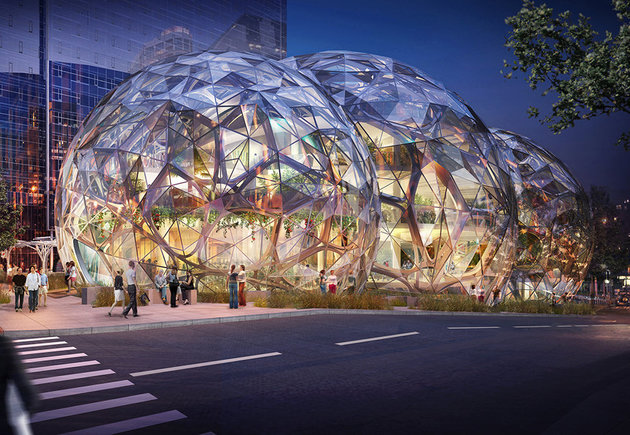 This rendering of the three biospheres being added to the new Amazon headquarters in Seattle will be an impressive addition to the downtown skyline. Rendering courtesy NBBJ

I’m happy to hear a five-story high living wall will be included, using the fabric pocket type infrastructure for the plants.

There are plans to include a 45-foot tall fig tree as one of 40 to 50 trees included in the three structures. They will have to be brought in and put into place with massive cranes. To give you an idea of the size, compare this to the familiar Moreton Bay fig growing north of the Natural History Museum. This tree, planted before 1915, is 60 feet tall with a spread of 120 feet. Imagine a tree not that much smaller inside a building!

Meeting spaces Amazon calls “treehouses” will be connected with suspension bridges. Amazon employees better not have any fear of heights. 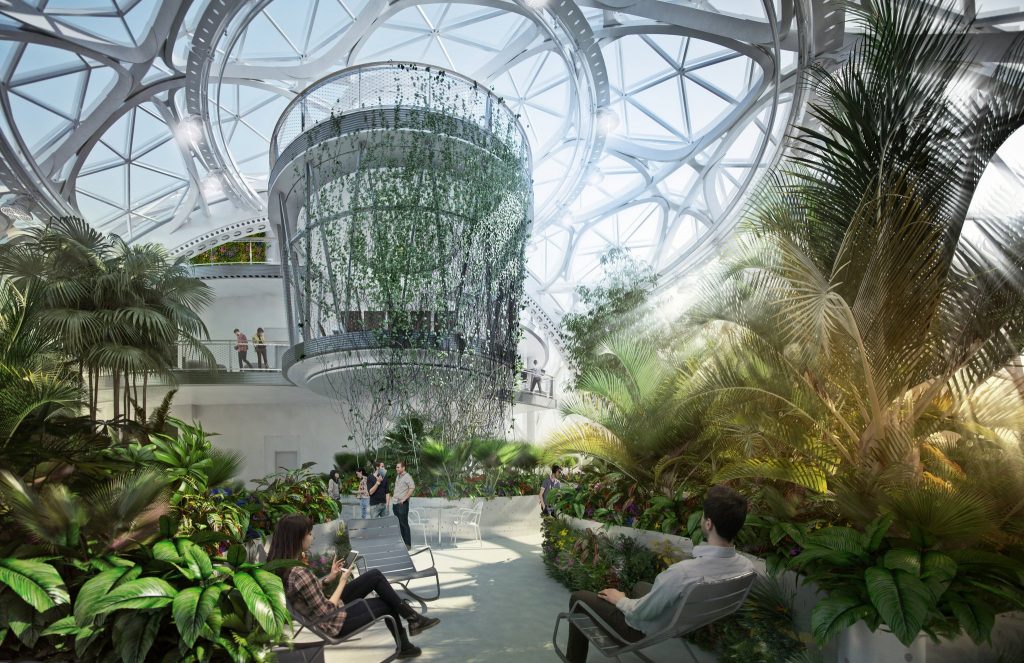 Amazon reports its will keep the spheres at 72 degrees and 60 percent humidity during the standard workday. At night temperatures will drop to 55 degrees and humidity will increase to 85 percent. This will be perfect for the cloud forest plant species, not so good for tech workers used to burning the midnight oil. Maybe it will encourage a little healthier work-life balance – an unforeseen benefit of the project.

We have written many times about the benefits of plants in the workplace. When office plants are including in workspaces, they boost employee productivity, wellbeing and creativity, and lower stress. They reduce the number of toxins in the air and increase oxygen. We recently read about a 2013 study at the University of Exeter in England, and it reinforces all the other studies I’ve come across.

But we are still fighting the fact that for every place like Amazon or Google or Apple, there are workplaces with no natural elements at all. According to the Human Spaces report we’ve quoted before, more than half of workplaces have no plants in them at all. None!

The crazy thing to me is that surveys show natural light and plants are the two most desired elements by employees for their working areas. Not every company can go crazy like Amazon, but come on, would a little bit of nice interiorscaping kill you?

Amazon’s biospheres are scheduled to open along with the rest of the massive project in 2018. They will provide us with a valuable field experiment. Amazon employees will have to purposefully get out of their cubicles and workspaces to walk into these massive biospheres. So it will be similar in a way to having to get up and walk to a break room or outside to an employee patio. Will this produce the same benefit to the employees as if they could view this tropical setting from a window during their regular work day? Would it be just as beneficial to have common inside plants sitting on desks, used as decoration in meeting rooms and hallways, or living walls in lobbies and other large spaces as artwork?

We will keep an eye on the Amazon project. We’ll try to pay a visit and give you a first hand report when it gets closer to being completed.