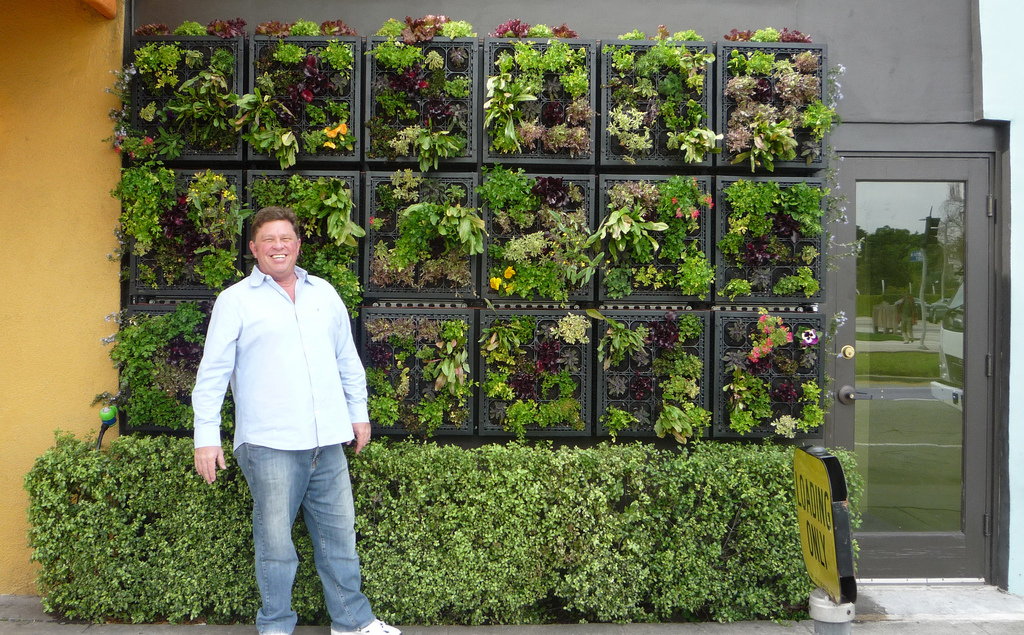 While you were recovering from Valentine’s  Day (or apologizing) and enjoying President’s Day on Monday, I bet you missed the first-ever International #GreenWallDay. We’re here to get you caught up on all things green walls – or as we more commonly call them in the United States, living walls. 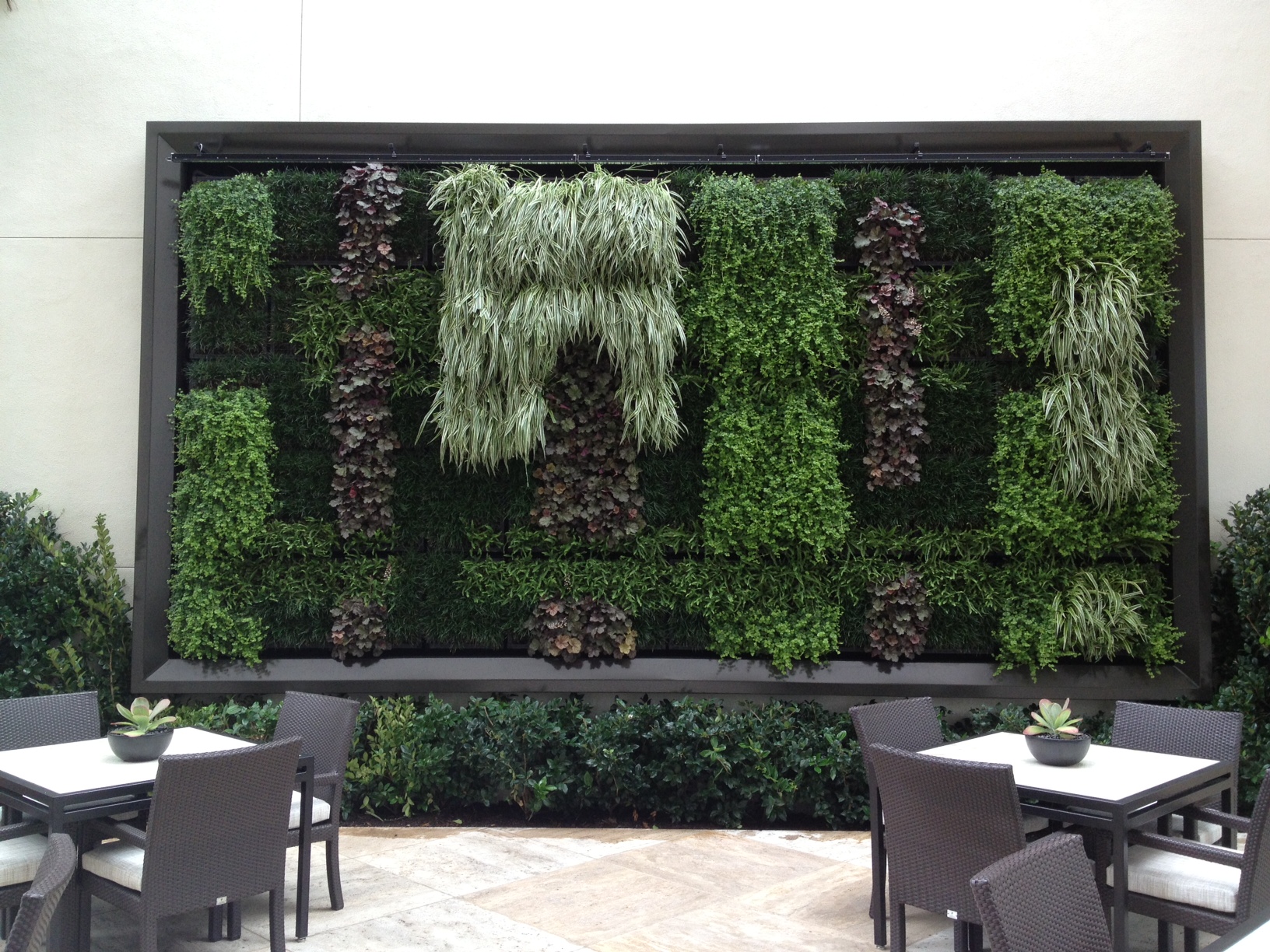 Green walls or living walls provide a spectacular backdrop in nearly any setting. We installed this one for the Irvine Company.

Green Wall Day is the idea of the Green Roofs organization in the United Kingdom, and #GreenWallDay was founded by Pritchard & Pritchard, with the support of industry leaders, including ANS Global, Biotecture, Mobilane, Scotscape and Terapia Urbana. You can add Good Earth Plant Company to the list.

The event honors the inventor of the modern living wall. But he’s not British, he’s an American, Stanley Hart White. He was born February 15, 1892 in New York, 130 years ago. Professor White taught landscape architecture at the University of Illinois between 1922 and 1959. He developed something he called “Botanical Bricks” and got a patent for Vegetation Bearing Architectonic Structure and System, in 1938. This was the basis for a green wall he built in his own garden. If you’d like to learn more about the specs, read Richard Hindle’s 2012 paper. Hindle recreated Professor White’s system as an experiment. 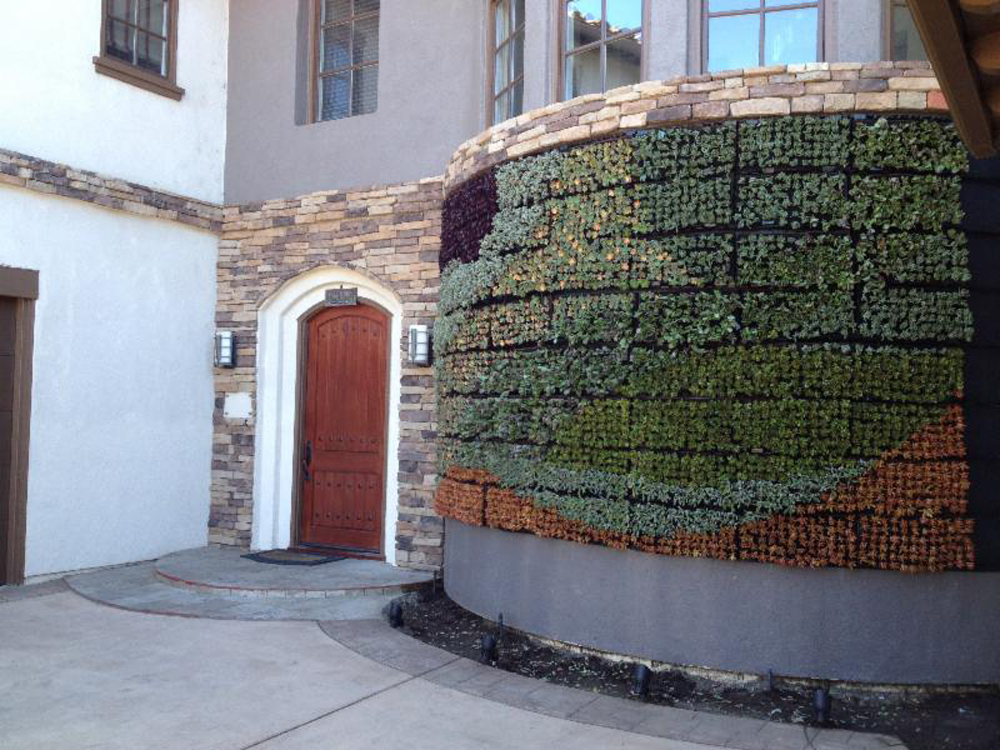 One of the few curved living walls we’ve built for a private home in north coastal San Diego County.

The person who made this idea practical and spread the gospel of living walls is one of my sources of inspiration, French botanist Patrick Blanc. He began his work in the 1980s and is still actively creating amazing walls around the world and inspiring many others to join him. It was one of my most memorable professional honors to introduce Patrick at the annual Cultivate conference in 2016 – and one of my biggest regrets that I didn’t get a decent photo of the two of us together!

Check out some of Patrick’s work and other spectacular living walls from around the world.

I must also give credit to McRae Anderson of McCaren Designs in Minneapolis, and Paul Kephart of Rana Creek in Carmel, California. Both of these men are industry pioneers, ahead of their time and generous in sharing knowledge and living wall philosophy. McRae’s first green wall was installed at the Cleveland Zoo in the early ’90s and it blew me away. Paul’s early creation of the green roof at the California Academy of Sciences in San Francisco was and is a west coast icon. Both of these ecological designers have inspired me to think bigger.

Good Earth Plant Company has installed nearly 200 living walls of all sizes, from our 80-foot tall living wall made of grasses on the exterior of the Loews Santa Monica Hotel, to projects the size of a poster in San Diego County homes. But our first commercial location was built in 2010 and has a special place in our history. 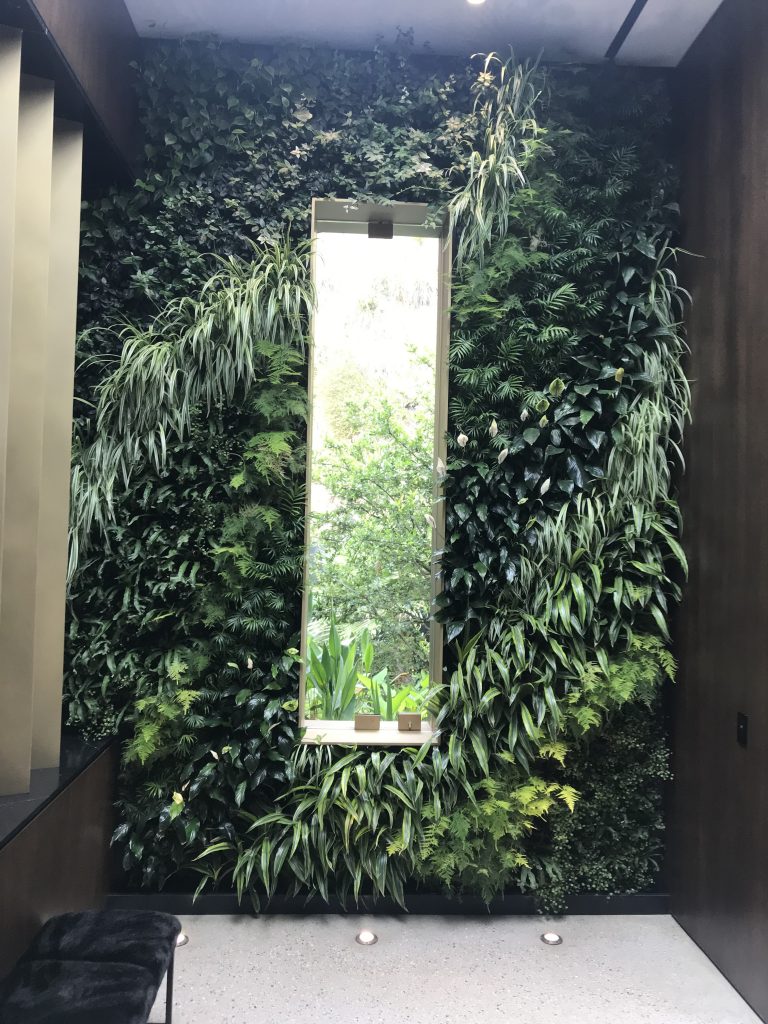 We are building more residential living walls like this one as more people spend time in their homes for work and play.

We had just installed the first permitted commercial green roof in San Diego County, and our project got a lot of media attention. That attention drew interest from celebrity chef and restaurant owner Mario Batali of Pizzeria Mozza fame, who heard about it. The Batali Group wanted to put a rooftop farm on its new Hollywood restaurant. I was asked to come take a look and offer a proposal. It was the first time I ever charged a fee for a consultation.

I went up to the restaurant and climbed up on the roof. I realized the cost of upgrading the building made the idea impractical. The Batali Group would have to install a new roof that could bear the weight, create new access, and build a parapet (wall) around it. This is when I suggested building an edible wall instead, something I’d just learned about at a Green Roofs for Healthy Cities conference in Vancouver.

The Batali folks loved the idea. There was a near-perfect spot just to the right of the entrance along Melrose Avenue. It not only changed things for the restaurant and its colorful creator, it changed the course of what Good Earth Plant Company was doing, thanks to the recognition we received on a national level.

The wall that started us down a new road at Pizzeria Mozza Hollywood in 2010. You never forget your first!

The living wall revolution continues around the world 11 years later. And now Good Earth Plant Company is contributing to their development. Just in time for #GreenWallDay, we’ve collaborated with Kevin Norton (a former employee) and developed our own living wall system.

Loosely based on Patrick Blanc’s hydroponic system, it sandwiches a bio-media (proprietary blend) between a backerboard and a layer of fabric. We not constrained to a straight edge. Our amoeba-shaped wall at the Water Conservation Garden is an example. 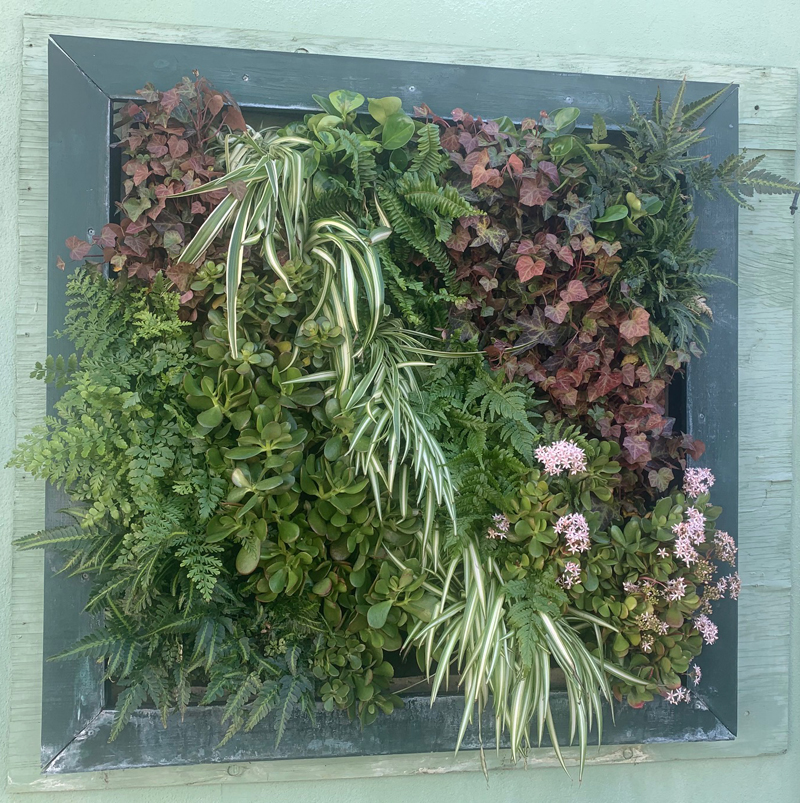 Our new proprietary living wall system allows us to create shapes instead of squares or rectangles. Photo: Jim Mumford

It’s “face planted” and looks fantastic from day one, without any infrastructure showing. The price is lower than most systems and it uses less water. An all-around winner!

As long as I’m breathing and hopefully beyond, Good Earth Plant Company will continue on our mission to use living walls and other elements of biophilic design to enrich peoples’ lives with plants. Especially with the impact of the pandemic, people are paying more attention than ever to the health of our air and environment. If more architects, developers, and governments at all levels helped support green building including living walls, we’d see much greener, healthier cities. Thankfully individuals, companies, and organizations are embracing the trend and spreading their benefits, one green wall at a time. 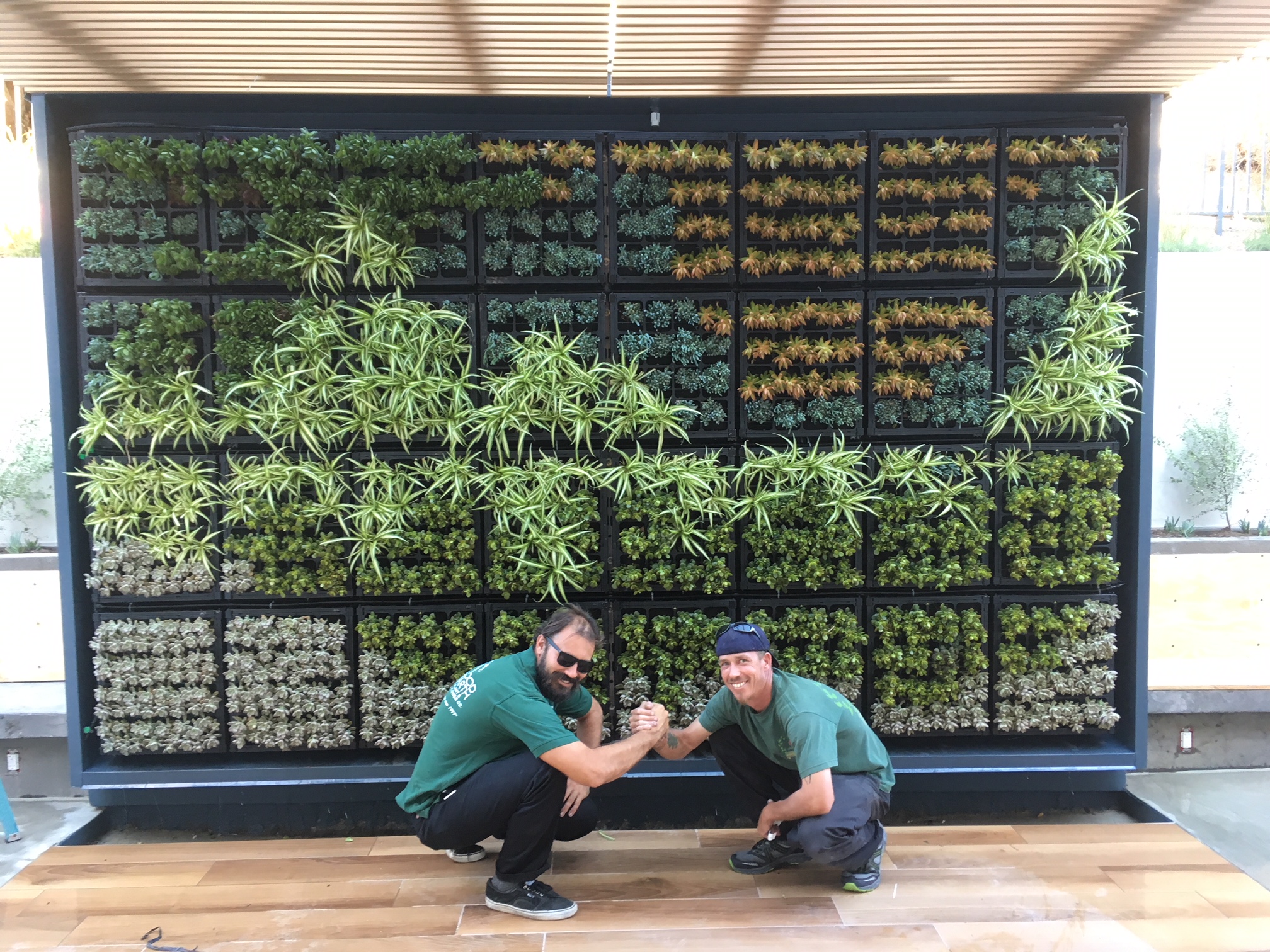 The good news: we’ve never been busier! But we always have room for one more. Can we help you bring a living wall into your life? Contact us! You know how to do it: jim@goodearthplants.com.

PS: The largest living wall project in the world as of 2021 is Khalifa Avenue, Qatar. This huge including a total area of 7,000 square meters – or 75,347 and one-third square feet! Wow! it uses an ANS Living Wall System and was installed by Nakheel Landscapes of Qatar. The living wall revolution is truly worldwide.