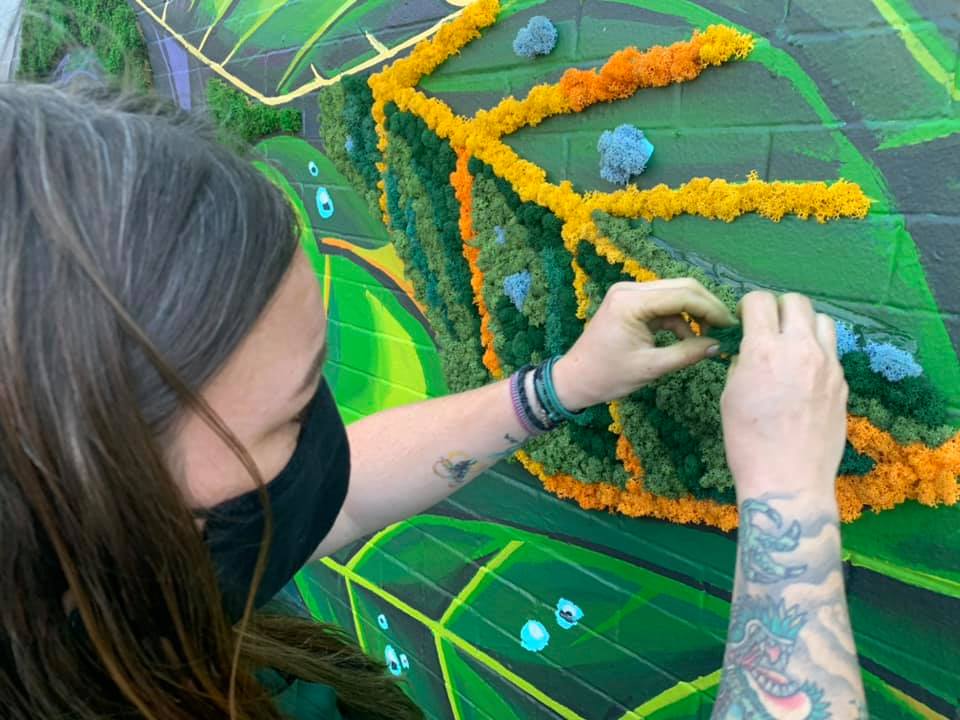 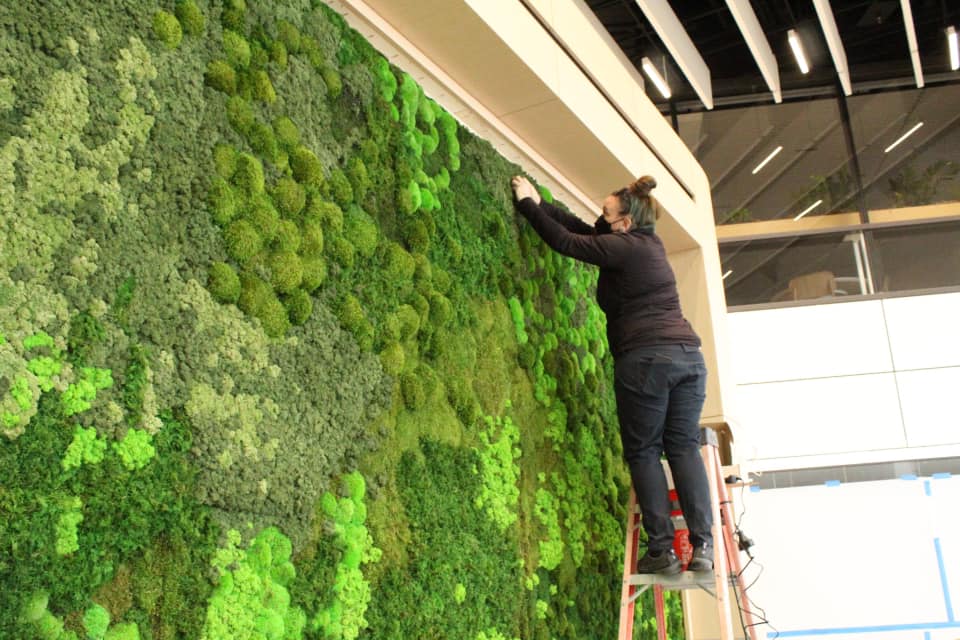 In case you haven’t figured it out, we love plants at Good Earth Plant Company. From our very first days selling “potted” plants and flowers, it’s been our mission to enrich peoples’ lives with plants.

Over the years, we’ve gone big with plants in the form of green roofs and living walls. Living walls have been some of our all-time favorite projects. We’ve put them in restaurants, hotels, malls, schools, and quite a few private homes. They challenge us to be creative and customize each project to meet our client’s needs.

But living walls need the right conditions, whether indoors or outdoors, to thrive. Larger-sized living walls are also a serious investment, so we want them to be set up for maximum growing success. 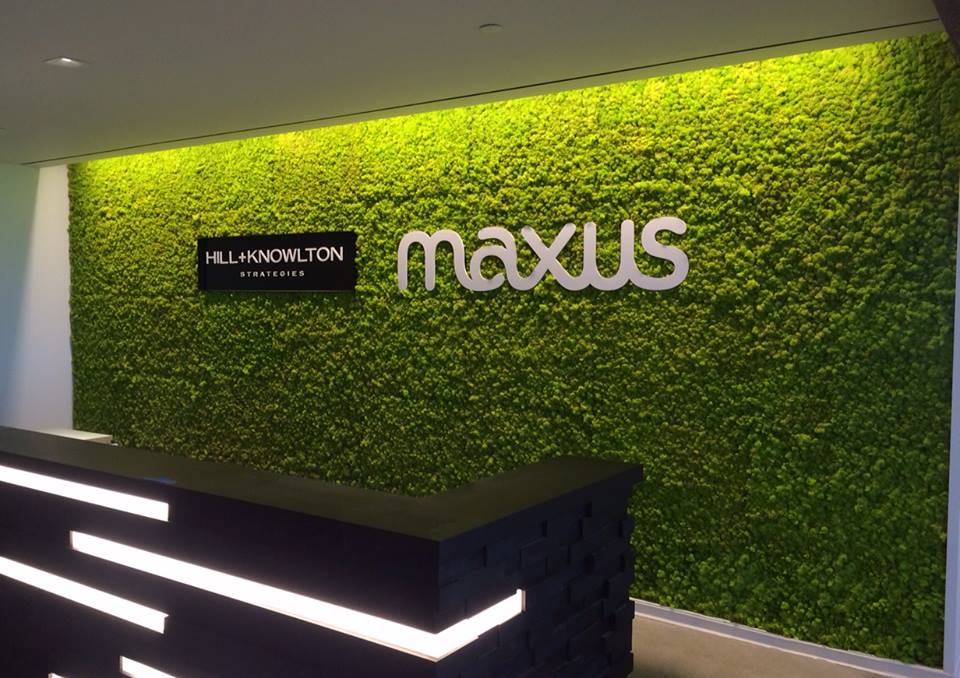 Moss walls are growing in popularity due to their many design options. The moss is preserved and not actively growing. All it needs is the proper humidity to maintain its freshness.

Six years ago, we added a new type of design idea: moss walls. We installed our first moss wall in 2015. I have to admit, I was a skeptic. But moss walls changed how we think about living walls at Good Earth Plant Company. After four decades in business bringing nature into workplaces, homes, and other indoor spaces, moss walls quickly became our most popular wall option for clients. I would never have predicted this.

Moss walls provide most of the benefits of traditional living walls and offer a few distinct advantages. They fulfill one of the three tenants of biophilic design – natural analogs. They are lighter than traditional living walls, so they don’t require the loadbearing structure to keep them in place. They don’t need to be watered either so that in addition to reduced weight, it makes them a good choice where moisture might cause damage to furniture or electronics. This also means they are easier to maintain. They need reasonable humidity in the air and need to be kept out of direct sunlight, but that’s about it.

One of the hidden benefits of moss walls is sound attenuation – they absorb sound. Perfect for a busy office lobby or noisy workplace. 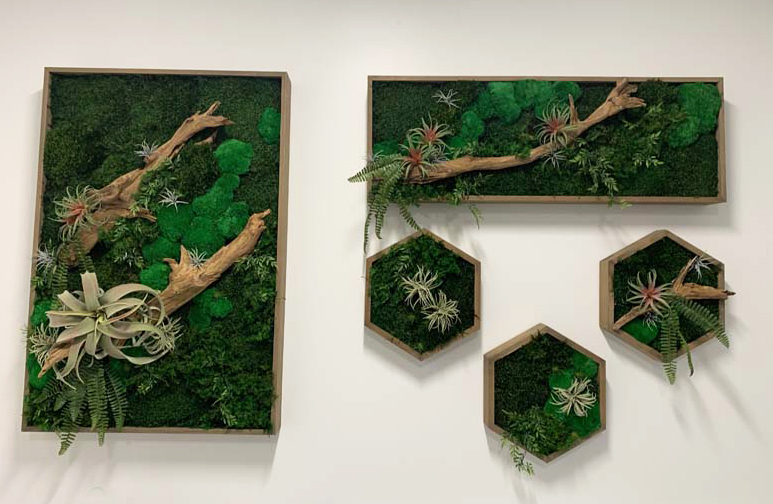 These moss wall artworks were created for Swinerton Energy in San Diego using a variety of natural materials.

Because moss walls are so popular with our clients, we’ve found many ways to get creative. Our first few moss walls were just one main color and texture, still beautiful but a bit plain. Then we started experimenting with more color and pattern. When designer Rachel Hecathorn joined our team, she added her vision and imagination to create beautiful original designs. She often adds other materials to the walls like branches, driftwood, bark, dried flowers and fruits, stones, and other natural objects. The results are one-of-a-kind with so much to see!

Good Earth Plant Company recently completed a project in a Southern California beach community for a client who asked us not to name them. On the outside of their building, there was an incredible painted mural in vibrant colors. Originally, the client wanted us to incorporate a living wall into the mural. But the location and the structural limitations didn’t make it feasible. When this happens, we try and come up with a solution.

So – even though we had never tried it before, we suggested applying colored moss directly to the existing wall to match the mural, creating a completely new art form with dimension and texture added to the mural. Fortunately, we had an adventurous client who was willing to experiment with us. 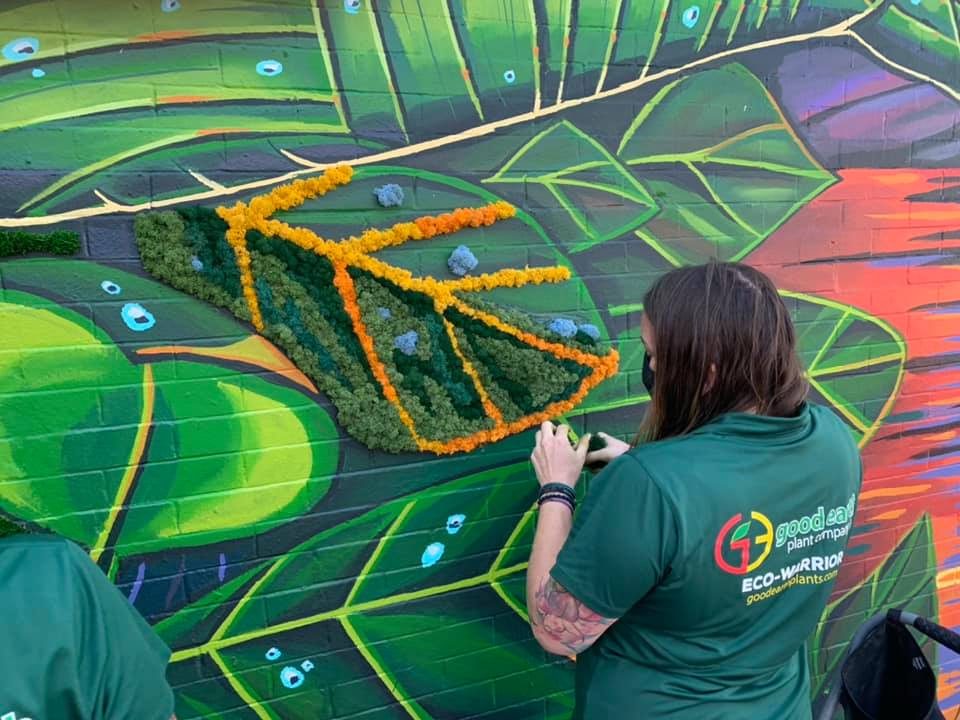 It took our crew three days to complete our “moss by numbers” project. People stopped to watch the project in progress. Selfie magnet! The results are spectacular, so we wanted to share them with you here.

NOTE:  We experimented on our own building first, and while it works, it’s not meant to be permanent. We estimate its lifespan to be about two months after being exposed to sun, seashore air, and touchy feely hands (grr!). 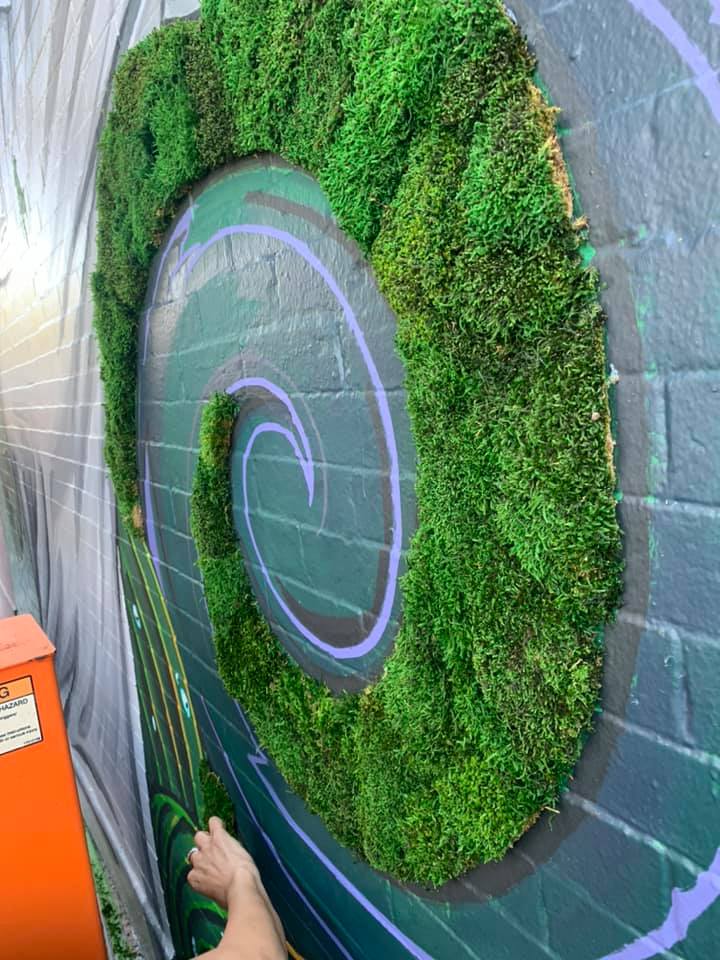 We took a risk with this moss wall project, and it paid off.

We have also recently recreated several more traditional moss walls, all for large technology companies. They are also shy about us sharing their names, but fortunately, they don’t mind if we show off a few of these projects. 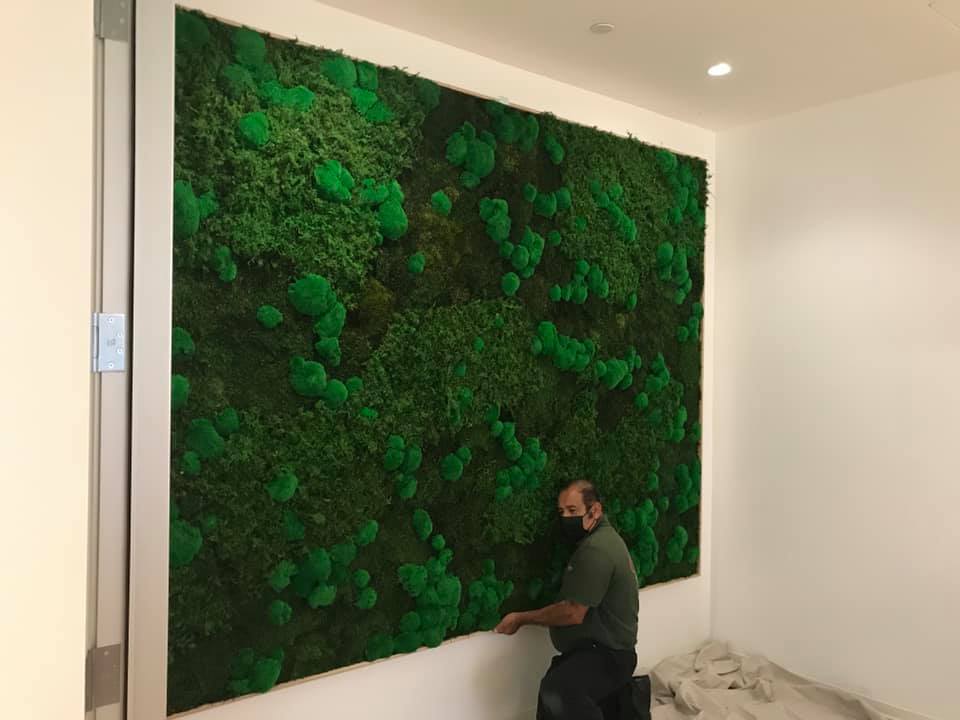 Celso works on the installation of our newest moss wall project for a big technology client. 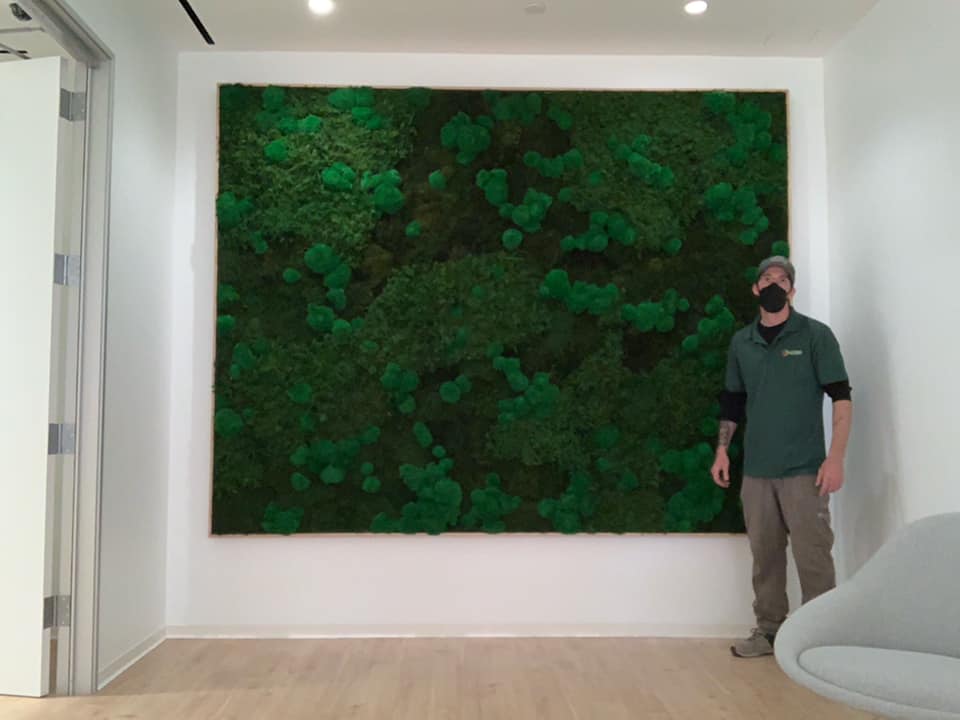 We have a few all-time favorite projects, and they’re still some of our best examples of the work we do. This triptych trio of moss walls for Mission Federal Credit Union’s headquarters remains a project we’re exceptionally proud of. 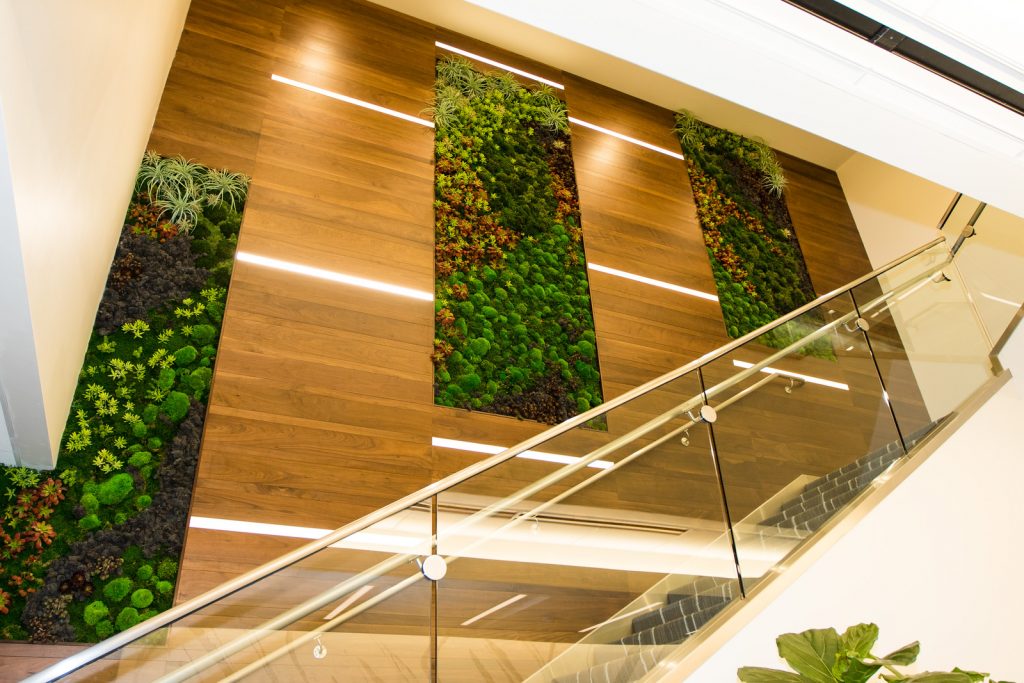 Picking a favorite client is a little like picking a favorite child, but we’ve loved working with the Bardstown Bourbon Company distillery in Kentucky. We have returned to create several different moss walls there. We just learned Bardstown won seven medals in the 2021 San Francisco World Spirits Competition. What’s this, you ask? Only the Oscars of the distilled spirits world! Winning a medal at this competition is a Big Deal. To win seven is a Really Big Deal. When four of the seven are double gold (meaning the entry has won Gold from every single member of the judging panel), these are the best products in the world. See the winners list here. If you’re into quality bourbon, you might want to check it out. 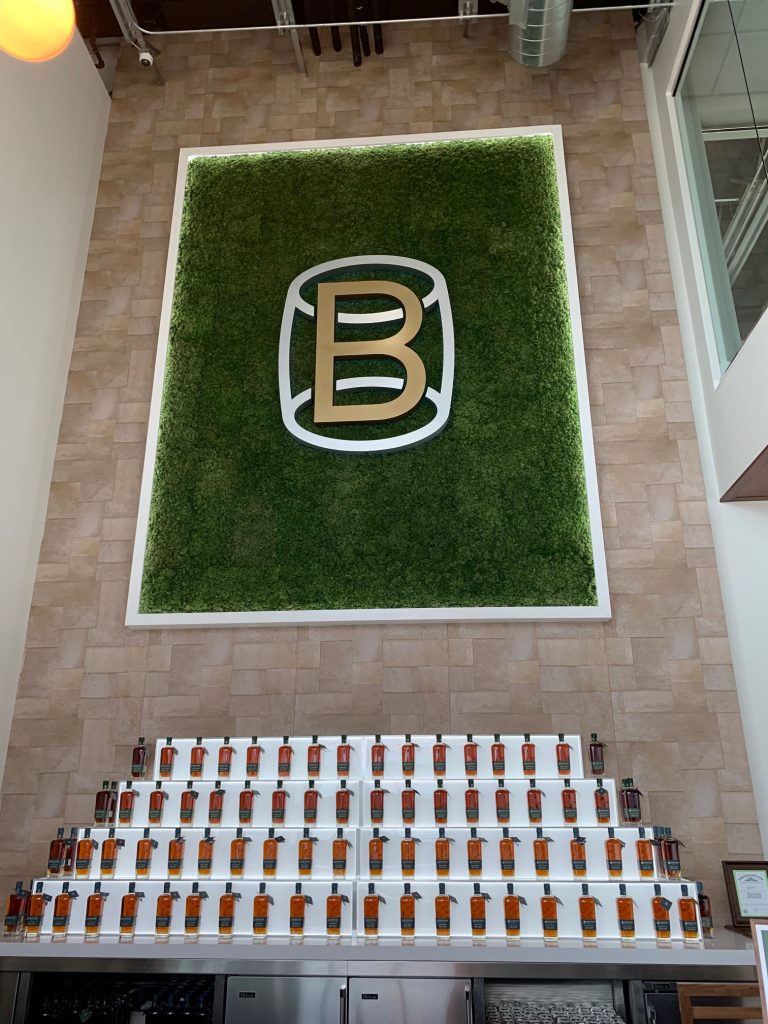 Congratulations to our friends at Bardstown. We’re impressed! Maybe the moss had a little something to do with your success? It couldn’t hurt!

Can we create an award-winning moss wall for you? Get in touch with us at info@goodearthplants.com or call us at 858-576-9300.