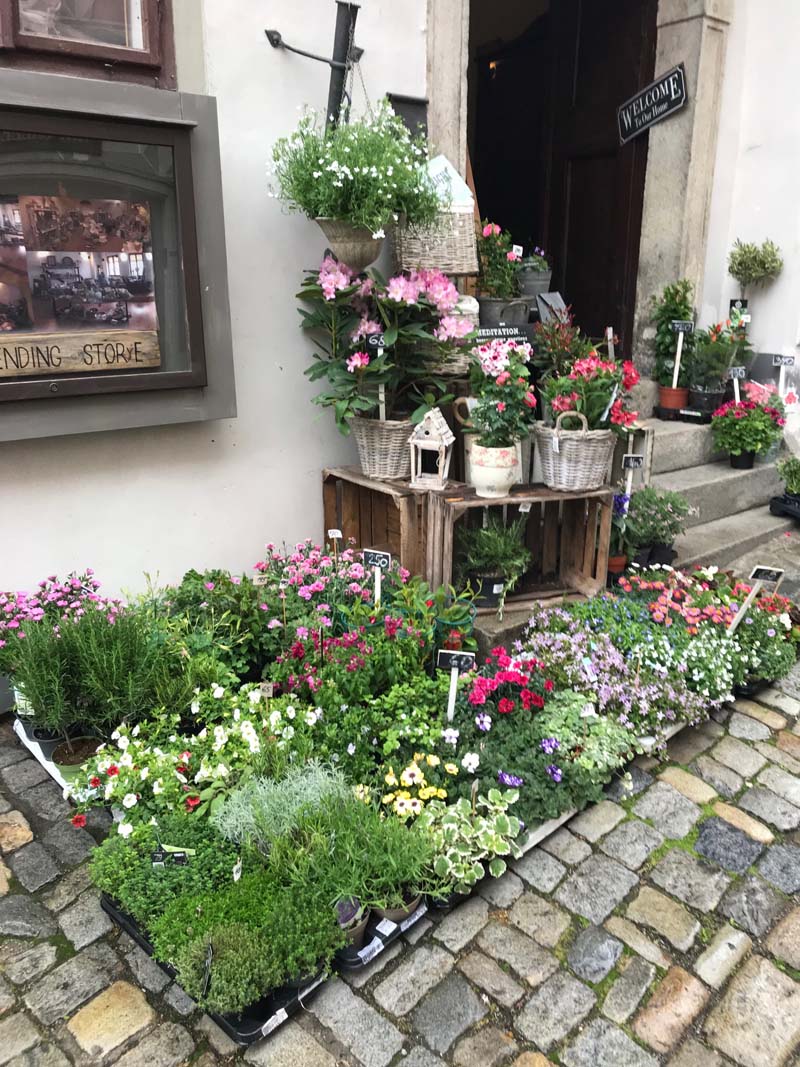 In May, I had the luxury of spending a couple of weeks traveling through Eastern Europe on vacation with my family. It turned out to be more than just a good time. It was an education seeing how our European neighbors view the importance of integrating nature into their environment. Those lessons are well worth sharing – along with a few vacation photos to make the point! 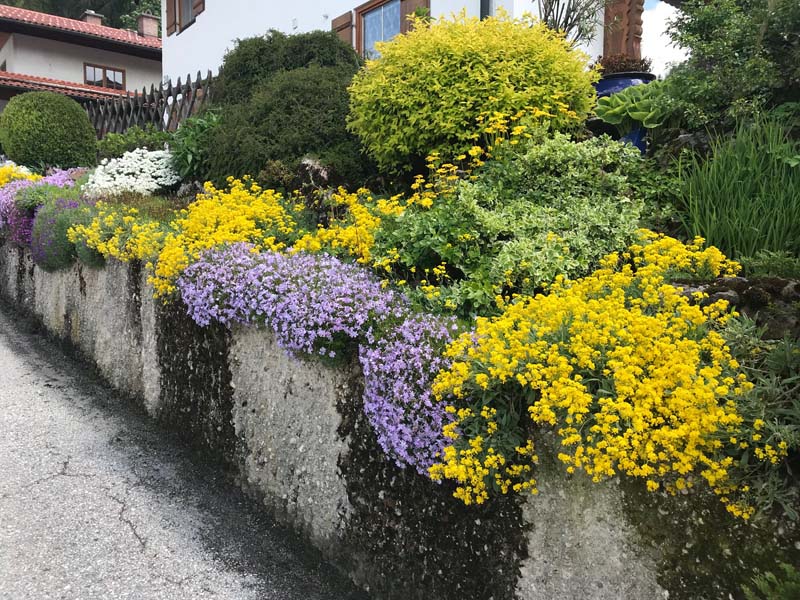 We began our river boat cruise in Budapest, Hungary, worked our way to Vienna, Austria and concluded our adventure in Germany. Europeans take climate change seriously. It’s a fact, it’s not a debate. They are doing their best to change their everyday practices to slow down the effects on the way to a full stop.

They value recycling. There are sorting cans at every location imaginable; you can’t miss one. They value art and architecture. As part of this appreciation for beautiful surroundings, plants and flowers are on display everywhere, both at private homes and at the office. This reminded me of something I learned back in my days as a florist.

According to Union Fleurs, an international floral trade association, and the International Association of Horticultural Producers, people in Switzerland, Denmark, and Germany spent the most per capita on flowers, plants and related items. The United States is fourth, followed by Japan, Great Britain, and France. 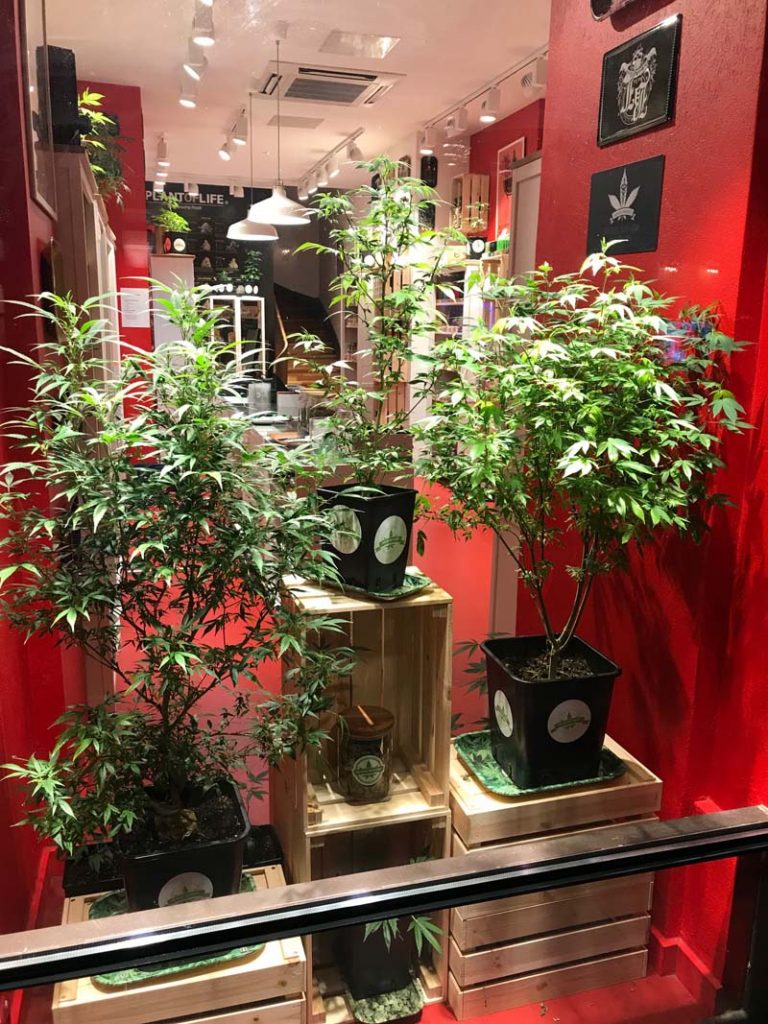 Overall, the U.S. buys the most, because of our larger population and our overall prosperity. Ornamental plants and flowers are considered a luxury item in many places. But when you live in smaller spaces, with less direct access to nature, people in Europe make use of all possible space to bring nature closer to them.

People have been inhabiting built space in Europe for thousands of years. As a result, buildable space is at a premium. Over the years, wars have leveled many areas in Europe. Europe also suffers natural disasters and wildfires. Communities keep building right over the top of what existed yesterday. Resources are limited as well – driving recycling and re-purposing on levels Americans may never achieve. 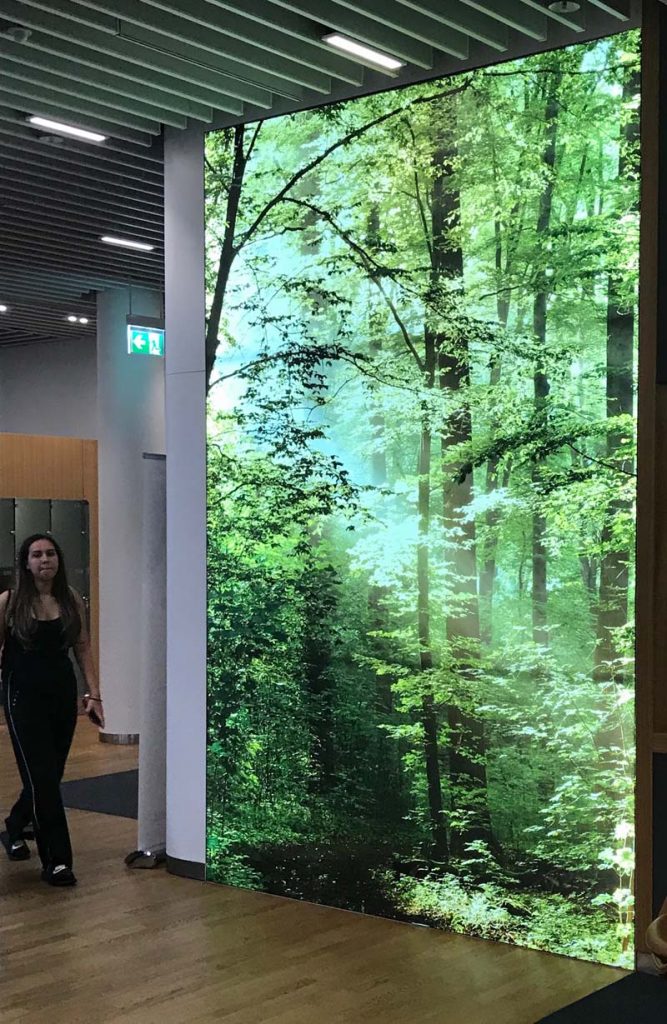 I began seeing the European biophilic connection almost immediately as we transferred planes in Brussels, Belgium. Large pictures of nature abound, as well as moss wall panels and both living and replica plants.

It didn’t stop when we boarded our cruise ship. It had an herb garden on its roof, fresh cut flowers in most common areas, displays of mossy rocks and green plants everywhere. This is also true of the larger cruise ships on the open seas. We wrote about it here on the blog a few years ago.

When we had the chance to visit cities and walk their streets, nearly every home had a small garden or a window box full of flowers. 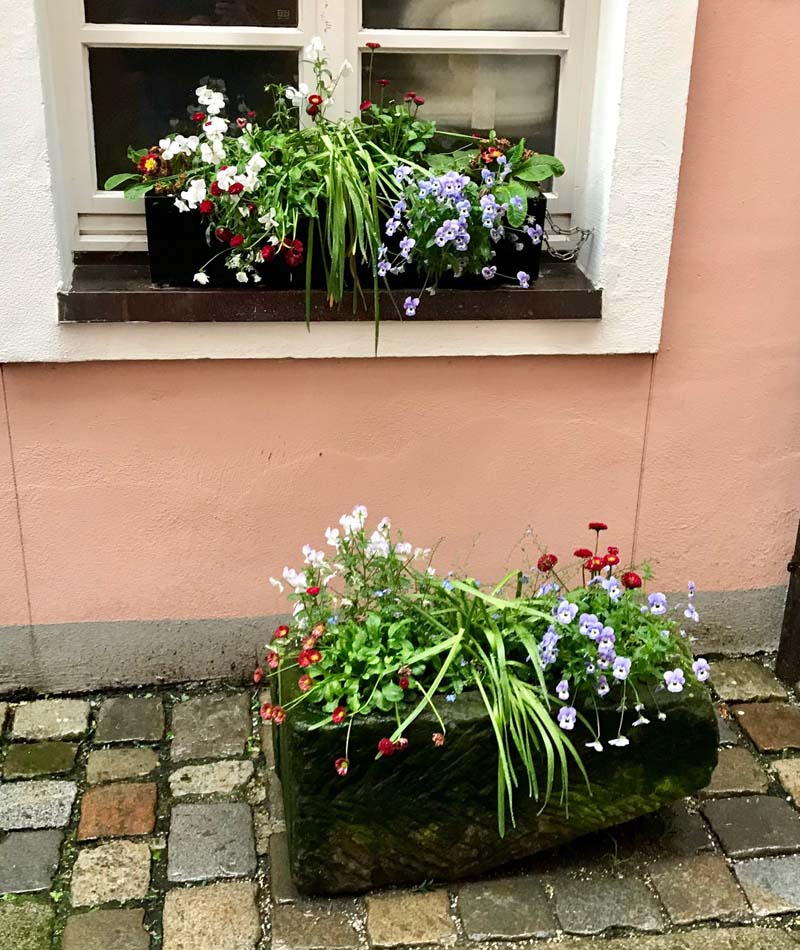 Flower shops and garden centers were much smaller than a typical American garden center or big box store, but I saw them everywhere. The frequency made up for the size.

There’s no way I could pass up a chance to check out this flower shop in Slovakia. Photo: Jim Mumford

It was thrilling for me to visit Germany, the grandfather of the modern green roof movement. I couldn’t believe my eyes. Green roofs were everywhere! Climate has something to do with it, as it can be difficult to maintain a green roof in the arid southwestern United States. But it’s more about environmental awareness and the desire as a culture to use every possible space in a smaller country to create natural spaces. 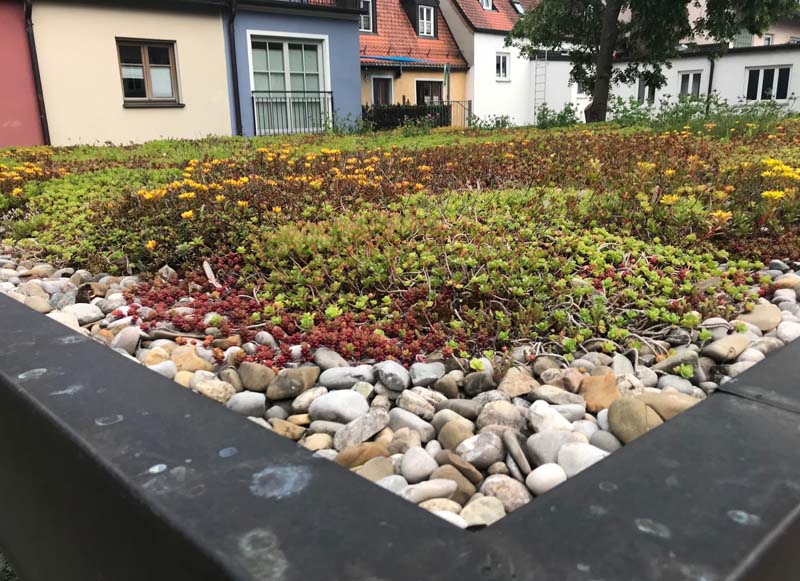 Americans might be richer overall, but when the United Nations issues its annual report on the world’s happiest counties, we barely make the top 20. Nordic countries are always at the top. But it can’t be a coincidence when the countries with high per capita consumption of flowers and plants all rank in the top group: the Netherlands, Switzerland, Sweden, Austria, Luxembourg, the UK and Germany. They all rank above the U.S. Others in the top 20 are nations known for their outdoor lifestyle: New Zealand, Costa Rica, Canada, and Australia. 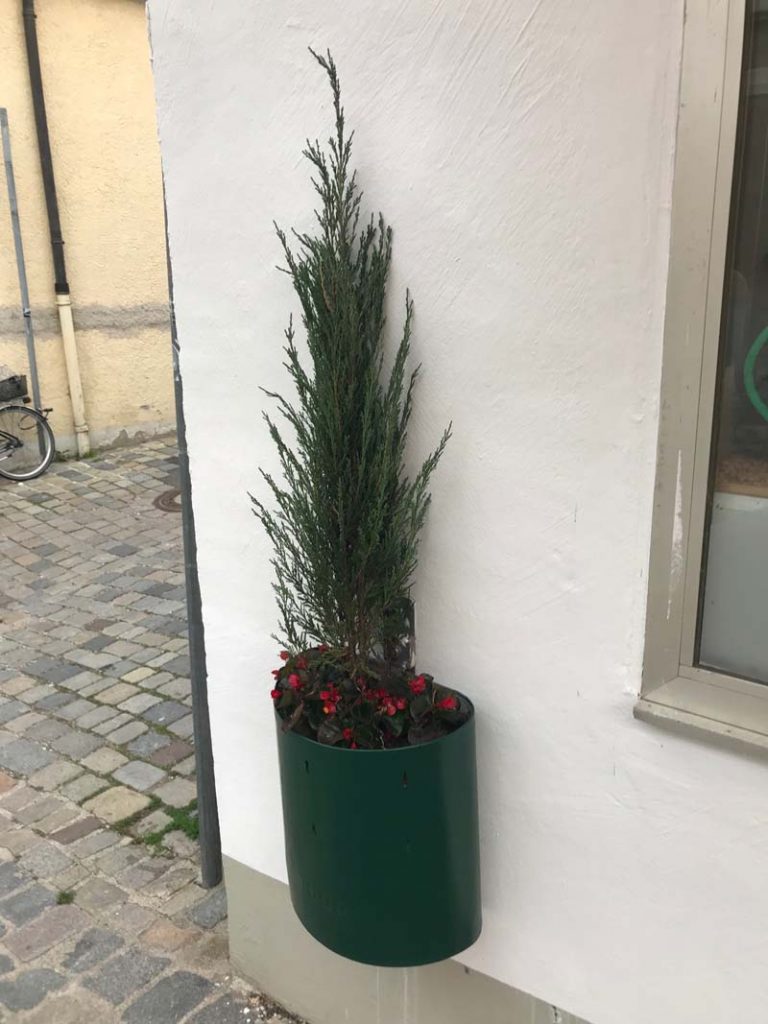 What a creative use of space and materials to add a plant to a home. Photo: Jim Mumford

Once again, it’s easy to connect the dots and see the positive effect of nature and natural elements in our everyday lives. Something as simple as growing and displaying flowers and plants really does make a difference.

The ONE piece of good news from my research on this: Americans spend a larger percentage on plants for the garden and growing indoor plants over cut flowers than people in Europe. This is a trend I love seeing! 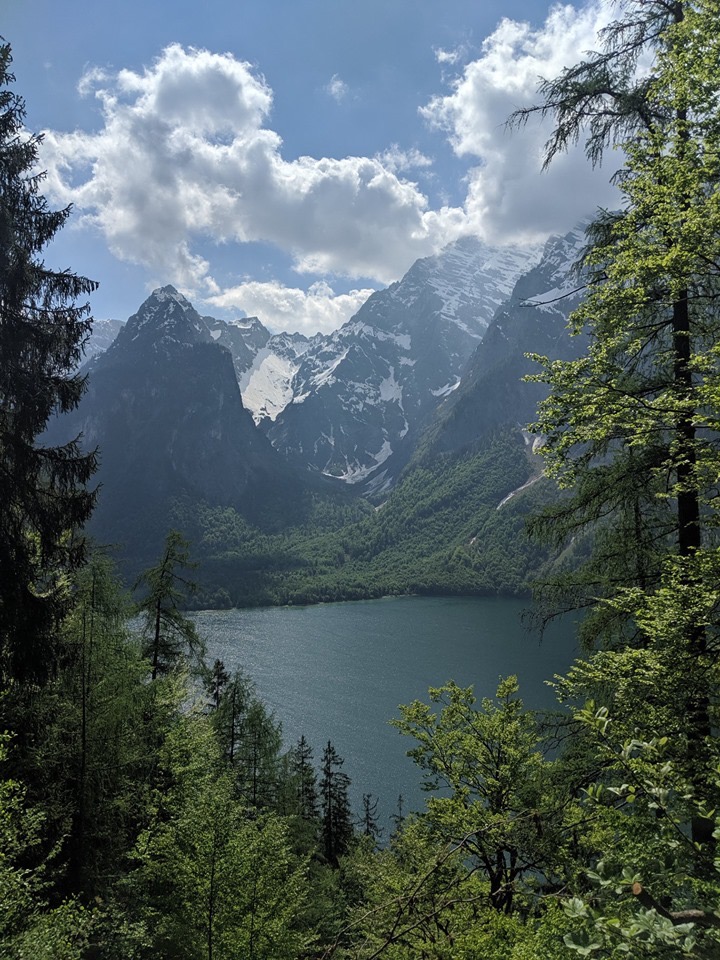 We should always try out best, but man can never beat Mother Nature. My perfect lunch spot in the Bavarian Alps. Photo: Jim Mumford