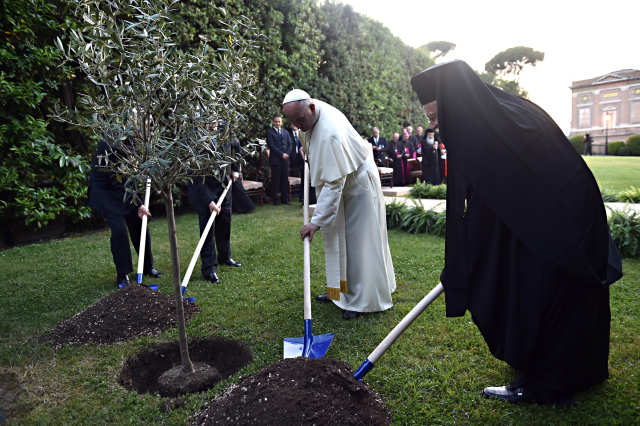 Many Americans are following the visit of Pope Francis to the United States, his first visit since being named the leader of the worldwide Catholic Church in March 2013.

You don’t have to be Catholic to like this humble guy from Argentina named Jorge Mario Bergoglio and his message of building a tolerant and inclusive society. Polls show Pope Francis, the leader of the world’s largest religion, is one of the most trusted, popular and quoted people alive today.

During his appearance in Washington D.C. at the White House with President Obama on Wednesday, Pope Francis urged the United States to help fight climate change and called on Americans to build a truly tolerant and inclusive society.

The Pope’s statements about climate change are considered controversial. I have to say, I don’t get why and I couldn’t disagree more.

Pope Francis has been willing to speak out about many critical world issues. One of his top issues is the health of our planet and the need to take care of it. A few months ago the Pope issued a paper called an “encyclical” on the environment. These papers are very strong statements from the Catholic Church.

This 192-page paper is really an amazing and inspiring document. It’s in English and it is well worth reading. Pope Francis includes a lot of current science: how burning fossil fuels are warming the planet and calling for government policies to cut fossil fuel use; how “synthetic agrotoxins” are hurting birds and insects; and the dangers of industrial waste building up.

The Pope calls for “maximum energy efficiency” through fuel efficiency, taking public transit, carpooling, recycling, conserving electricity by turning off lights, and planting trees. This is a Pope who loves to plant trees. Do a Google search and you will find at least a dozen photos of Pope Francis planting trees around the world, including in Israel with Prime Minister Shimon Peres.

It’s amazing to witness the most powerful religious leader in the world embracing science on behalf of the Catholic Church. The Church hasn’t been all that friendly to science over the last thousand years. Ask Galileo.

But here we have a very popular Pope calling for a new partnership between science and religion to help fight climate change and clean up the planet. He knows there are a lot of critics who don’t think this is the proper role for the Pope. Some are religious scholars; others are politicians who don’t like the Pope making what they think of as political statements.

“It must be said that some committed and prayerful Christians, with the excuse of realism and pragmatism, tend to ridicule expressions of concern for the environment,” he writes.

Pope Francis ties his concerns about global warming to his desire to fight inequality and global poverty. “The Earth, our home, is beginning to look more and more like an immense pile of filth,” Pope Francis has written. He blames overconsumption, consumerism, dependence on fossil fuels and the indifference of the powerful and wealthy. Pope Francis says Earth will turn into a living Hell if we don’t do anything. Our world will be filled with methane and carbon dioxide, the oceans will turn to acid and our global food supply will decline until we are all hungry.

Why is any of this controversial? By now science has given us all the evidence we need to know that the impact of human beings is causing climate change and other negative impacts on the environment. The Pope is embracing this reality out of his love for all of God’s creations in nature and urging people to take action – if not in the name of science, in the name of compassion and caring for our fellow human beings and other creatures. He seems to really understand the science behind it, and he isn’t denying the truth.

I’m excited to see someone with a powerful voice speaking up on these issues as someone devoted in my own way to cleaning up our planet and strengthening our relationship with nature. Pope Francis has a whole lot more influence than I do! If people are moved more by religion than by science to take action on climate change and the rest of these issues, I am all for it.

This Pope took the name of St. Francis of Assisi, who is the patron saint of nature and of ecologists. St. Francis had an infinite love for animals and felt the sparrows were as much his brothers as his fellow priests. Pope Francis says he took the name because St. Francis was devoted to the poor and downtrodden. But maybe God works in mysterious ways and thought it would be the perfect name choice for the first “green” Pope.