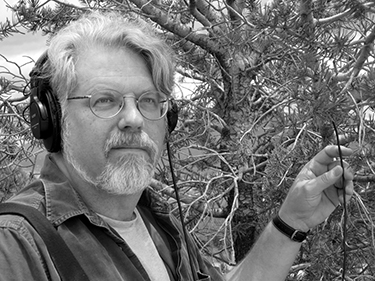 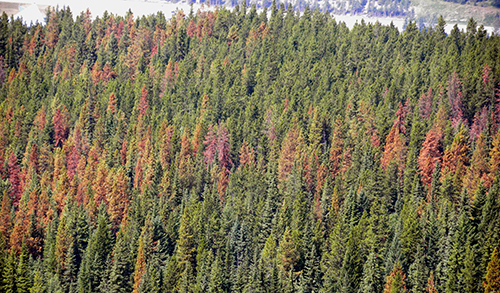 California’s trees are dying off due to bark beetle destruction. Could music and sound provide the solution? Photo: Wikimedia/Mark A. Wilson

If UC Santa Cruz music professor David Dunn scores a hit with his latest composition, he’ll have millions of listeners, maybe even hundreds of millions. But they won’t be spending a dime, and they won’t be singing or dancing. They’ll be dying.

For ten years, Professor Dunn has created music using sounds in nature, specifically the sound of bark beetles in California’s forest as they munch on trees. Aggressive bark beetles make a LOT of noise. They also contribute to widespread tree destruction, which has been made worse due to several years of drought. His recordings of bark beetles were turned into a CD called “The Sound of Light in Trees.”

Two Northern Arizona University forest scientists worried about bark beetles contacted Professor Dunn, and together they’ve come up with a way to disrupt the life cycle of bark beetles and save trees without disturbing the environment or applying harsh chemicals.

Watch an interview with Professor Dunn and hear the sounds of his beetle-disrupting soundtrack.

Professor Dunn and his colleagues created a device using the sounds of the beetles layered over randomly generated electronic sounds that confuse them and stop their basic behavior of feeding, communication, and reproduction. The bark beetles stop burrowing through living tree trunks. It’s this tunneling which eventually destroys the trees. Beetles then move on to the next healthy tree and kill it.

Sound has been used for pest control before, but if the sounds don’t vary enough it won’t work when the bugs get used to the noise and start ignoring it.  While sound has been used in pest control before, usually the pests get used to the noise and return to the area, undisturbed. This approach varies the sound layers added to the beetle sounds and prevents them getting used to it.

The next step is to distribute the sound in the affected areas using FM broadcast signals. Small amplifiers will be attached to trees within range of an antenna to spread the sound through the forests.

In a UC Santa Cruz news article, Professor Dunn commented on the unusual circumstances which resulted in an artistlike him being awarded a scientific patent, pointing out there are very few examples of proven results from collaborations between artists and scientists.

“My contribution to the project mostly concerned the technical design aspects of the audio, electronic circuit designs, and the novel sound gathering techniques,” Dunn explained. “In a very real sense, this represented a kind of reverse “tech transfer” from the arts to the sciences. Historically, it has usually been the other way around.

“We have now entered into a period of common interests between art and science largely driven by the commonality of digital tools. Artists are now just as involved in designing such tools as the scientific community and often create software and instrumentation in order to facilitate their creative visions that may ultimately be of even greater value to scientific research. I think that this was one of those instances and a couple of fortuitous events conspired to allow something interesting to happen,” said Professor Dunn.

Wouldn’t it be amazing if our forests ended up being saved by a musician, with a little help from his scientist friends? Being beetles themselves John, Paul, George, and Ringo would approve.

I just have to ask , though: If a tree eating beetle’s life is disrupted by music, will it make a sound?