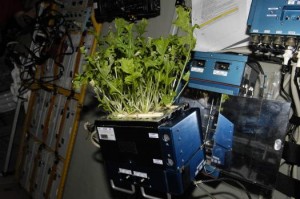 In an ABC news article (Sept 2013) NASA will reportedly be sending lettuce plants into space. In a project dubbed “Veggie,” a form of red lettuce will be grown, frozen then sent back to earth. NASA project scientists will be checking to see what types of micro-organisms are on the leaves to see if the lettuce will be safe to eat in orbit.

Not a new idea….NASA has been playing around with growing a food source and using plants to clean the air in space for years. But imagine if we could cultivate entire crops of vegetables, fruit or other plants in space? Picture crops of tomatoes floating in a space-farm orbiting next to a DirecTV satellite or corn being grown in a sealed container orbiting the earth. The astronauts aboard the International Space Station could count on freshly grown food while they are in space instead of relying on MRE-style “rations.”

Scientists are still working out the details. But project “Veggie” is scheduled to go to the ISS on the SpaceX 3 flight on December 9, 2013. Just think how this small journey for a lettuce plant could lead to a giant leap for fresh food in space. Who needs gravity anyway?

Would you eat a salad grown in zero-gravity? Leave us a comment and let us know your thoughts!

**Good Earth Plants and GreenScaped Buildings are hiring! Check our website for information about joining our team today! www.goodearthplants.com**