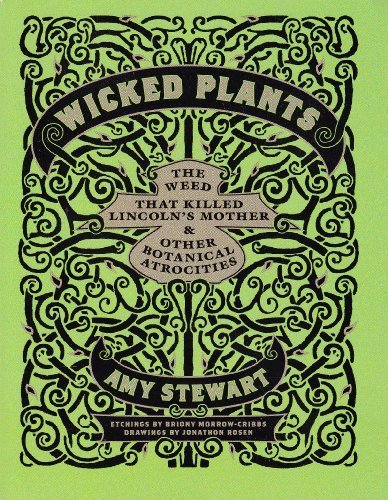 People love being scared. We love it so much we have an entire holiday devoted to scary things: Halloween. Science backs up the reasons why we love horror movies and celebrate creepy things: we embrace the excitement and energy part of the “fight or flight” instinct. So we get ourselves all worked up to get that rush from screaming and getting freaked out.

Everyone has their favorite monsters. Some people dress up like them. I have my favorite monsters too – and they are plants! There are some seriously dangerous plants that can inflict injuries from annoying to serious. Some of them can kill you with their poisonous ways.

One of my favorite books is “Wicked Plants” by author Amy Stewart. Amy loves the world of plant villains, especially when they play a role in human history. She writes in the introduction to her book “There is something beguiling about sharing their dark little secrets. And these secrets don’t just lurk in a remote jungle. They’re in our own backyards.”

Several especially scary plants are Southern California natives, or flourish in our climate. Chances are better than good you have already encountered these dangerous plants and lived to tell about it.

In honor of Halloween and inspired by the stories in Amy’s book, I have put my own list together of my “Ten Monstrous Plants.” 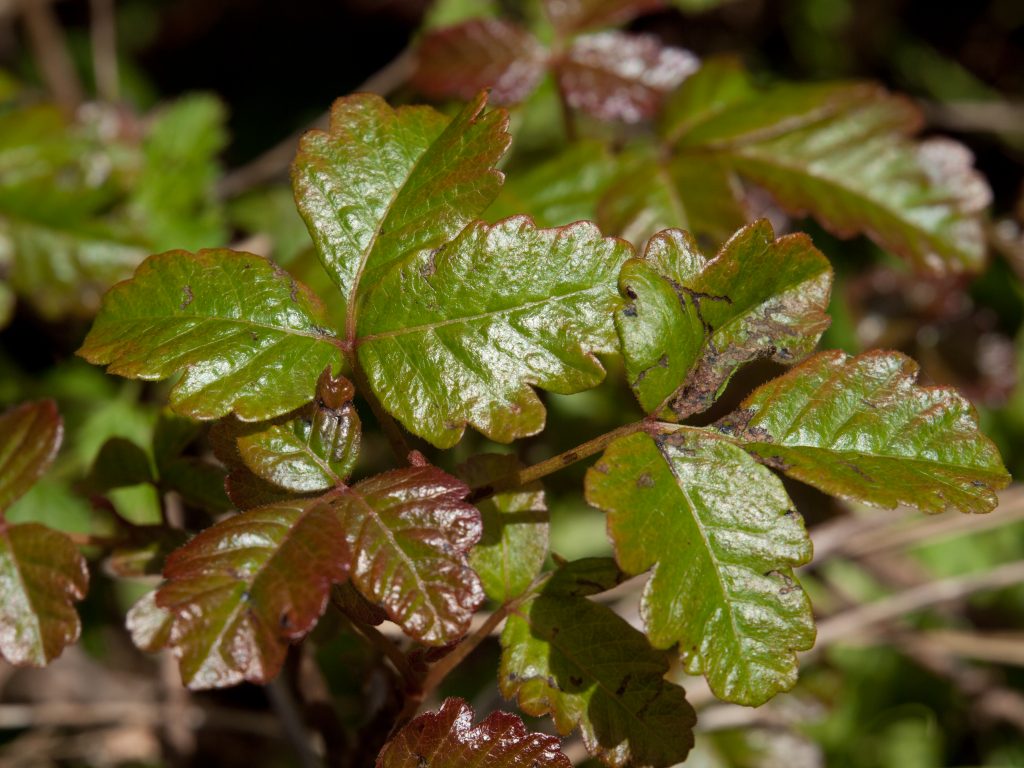 I am so allergic to poison oak, I swear I can smell it. Poison oak is rampant in San Diego County. It’s sneaky because it blends in with the surrounding habitat. Look out for toothed or scalloped leaves are divided into threes. Touching the leaves can result in a severe allergic reaction and rash as anyone unlucky enough to do this knows. Typically grown in riparian habitats, poison oak is lush green in the summer, deep red in the fall, and perhaps only sticks in the winter. Beware! 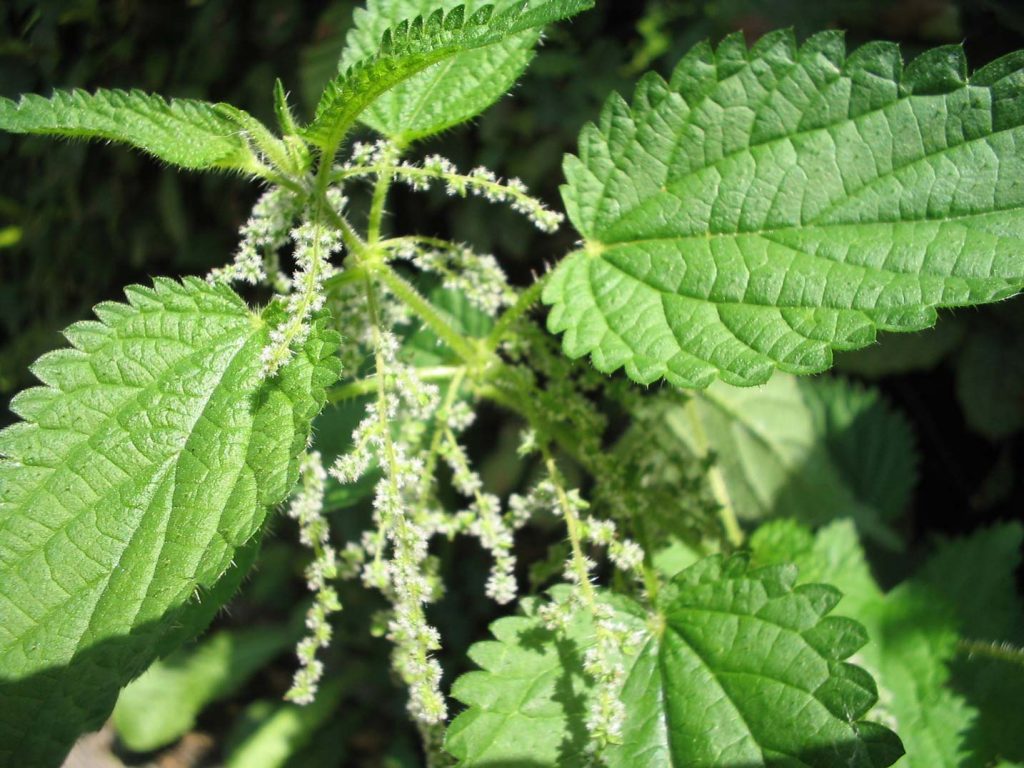 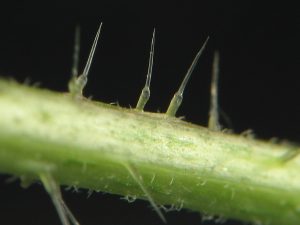 This is how stinging nettles get you: microscopic little hairs on the bottom on their leaves full of toxins. Photo: Wikimedia

You might brush right by stinging nettles on a hike and not even notice. They don’t really stand out. But you’ll know when the burning starts a few minutes later. It can grow worse into an unbearable raging hot itch. There are many species of nettles, but stinging nettles (Urtica dioica) are the usual culprits. If you look very closely at them, the underside of its  leaves are covered in sharp little hairs, called trichomes. They are the plant’s defense mechanism. The hairs are brittle and break off at the least bit of contact.

They are hollow and they are like little hypodermic needles which then inject an irritating fluid made up of histamines, formic acid, and other chemicals. They can penetrate the skin of any animal, whether deer looking for food or a human hiker. Two more chilling facts: Female stinging nettles are more poisonous than male nettles; and when the nettles grow back after being activated, the new leaves have more stinging hairs than the older leaves. Stinging nettle is also eaten and used in a tea providing natural remedies. 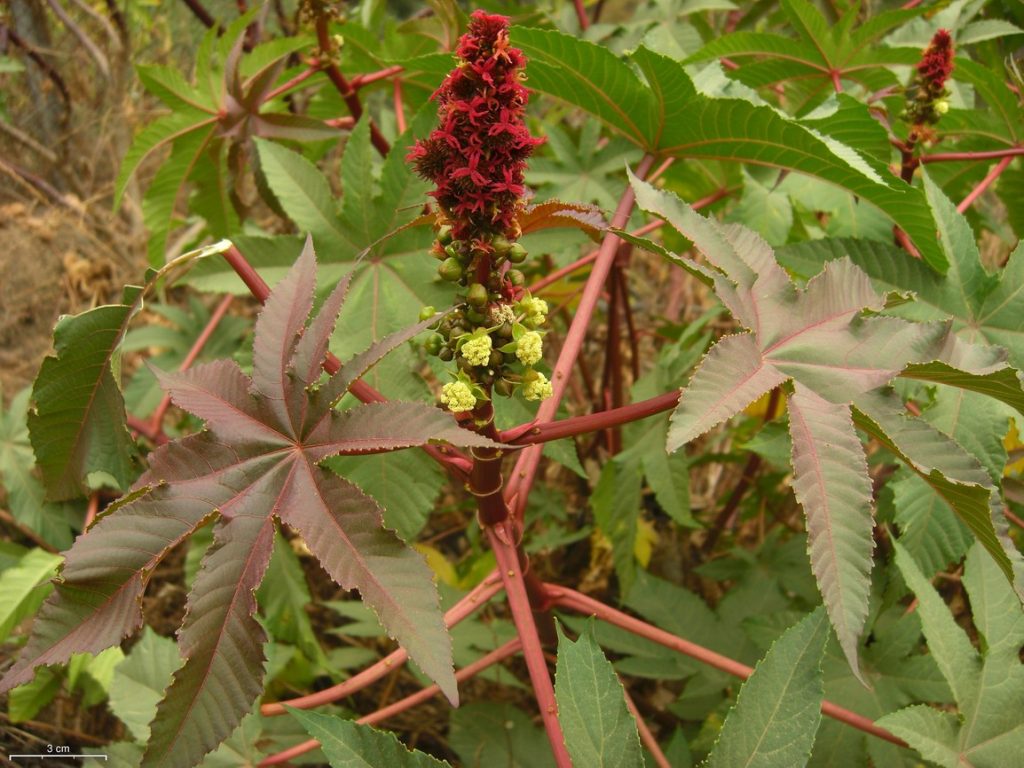 The castor bean or castor plant was introduced to the U.S. from the West Indies via Africa. It is considered an invasive species in California and grows in warmer area up to 30 feet. You can find it growing wild along the edge of the San Elijo Lagoon. It loves stream and river banks. Its most well known product is castor oil and it is an important commercial plant for this reason. But this is the plant that also produces one of the world’s deadliest poisons: Ricin. Just one castor bean has enough natural ricin in it to kill a person. People grow them because they are a beautiful deep purple, hardy and nice looking plants. But I’d stay away! 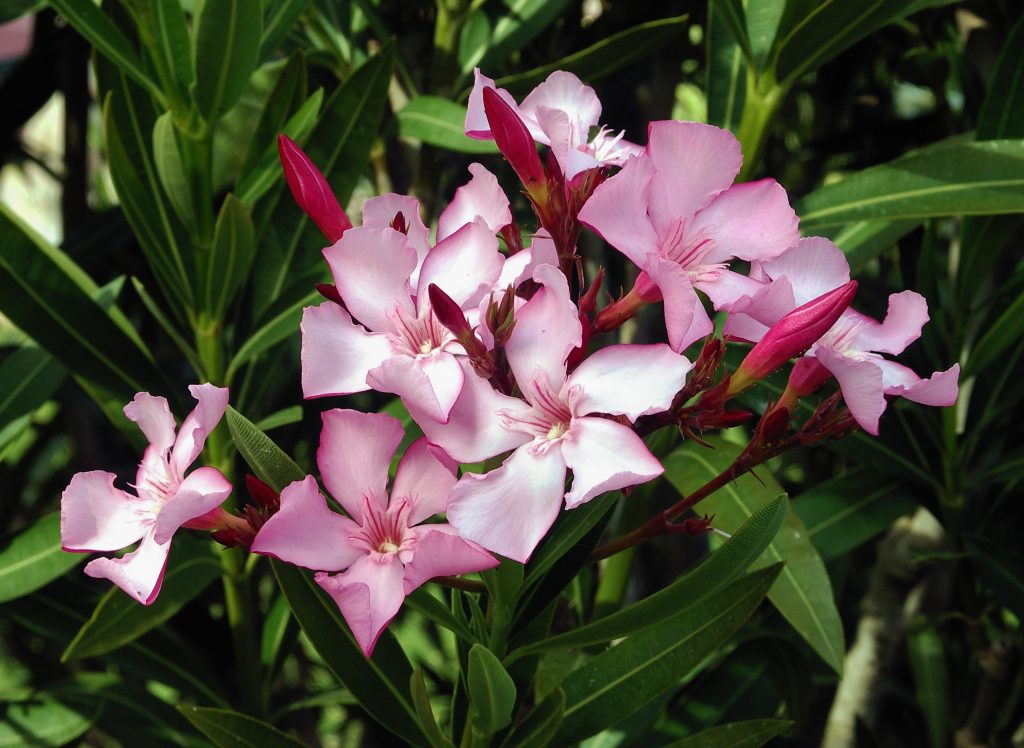 Oleanders have beautiful flowers and are drought tolerant favorites, but their leaves are toxic to people and animals. Photo: Wikimedia

Oleanders are found throughout San Diego and Southern California. They grow quickly, have beautiful bright flowers and they do not require much water. They are planted in street medians and along lots of our freeways. But oleanders are one of the most toxic common garden plants in the world. If children or animals chew on any part of this plant, it can make them incredibly sick or even kill them. People in Southeast Asia use oleander to commit suicide. When Oleanders catch on fire, even their smoke can be toxic! Don’t be tempted to plant this in your yard. 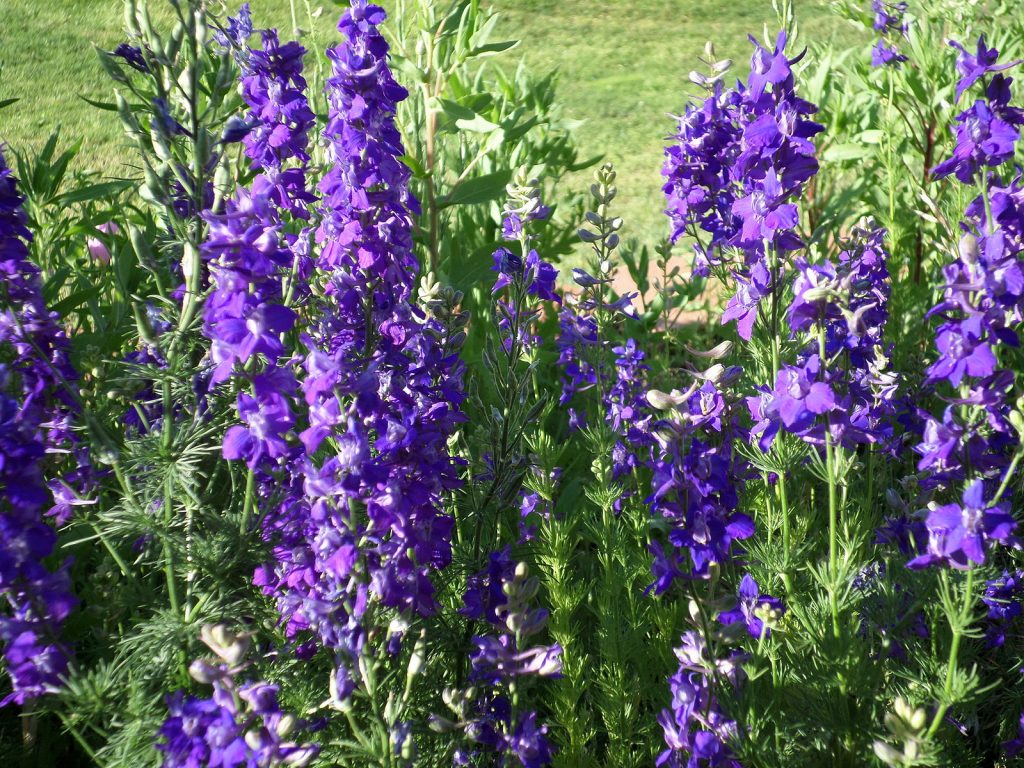 Larkspur is another pretty flowering plant (one of my favorites!) hiding its toxic qualities. The seeds and young plants of the larkspur are toxic to both people and animals. Larkspur poisoning symptoms include general weakness and muscle spasms, abdominal pain and nausea. Eventually, it can lead to respiratory distress, paralysis and death. Larkspur is mostly a threat to livestock. When cattle are allowed to graze in fields with newly blooming larkspur it can kill them. 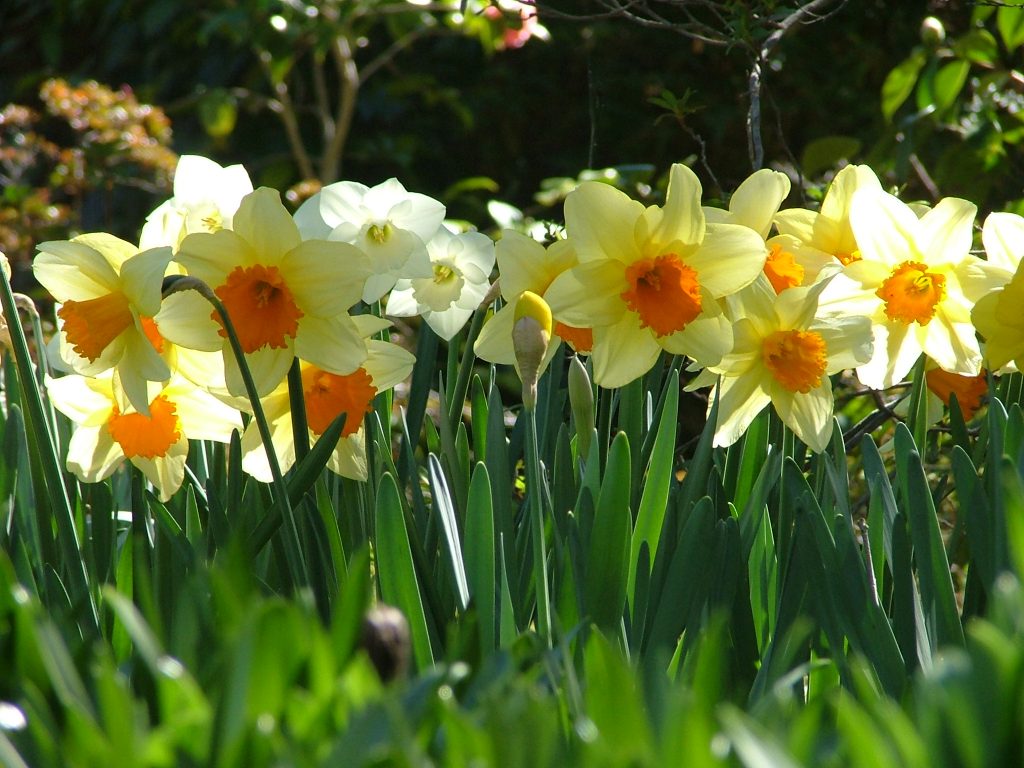 These cheerful daffodils look harmelss. but their bulbs are toxic and can be confused with onions. Photo: Wikimedia

Another deadly flower with a pretty face! Daffodil flowers are not so harmful – the worst that might happen is getting numbed lips. it is their bulbs that do the damage. Daffodil bulbs look like onions and can easily be confused for them by animals and people. If you grow daffodils, be very careful when you store the bulbs and make sure you put protections in place so your pets don’t dig up the bulbs and eat them. 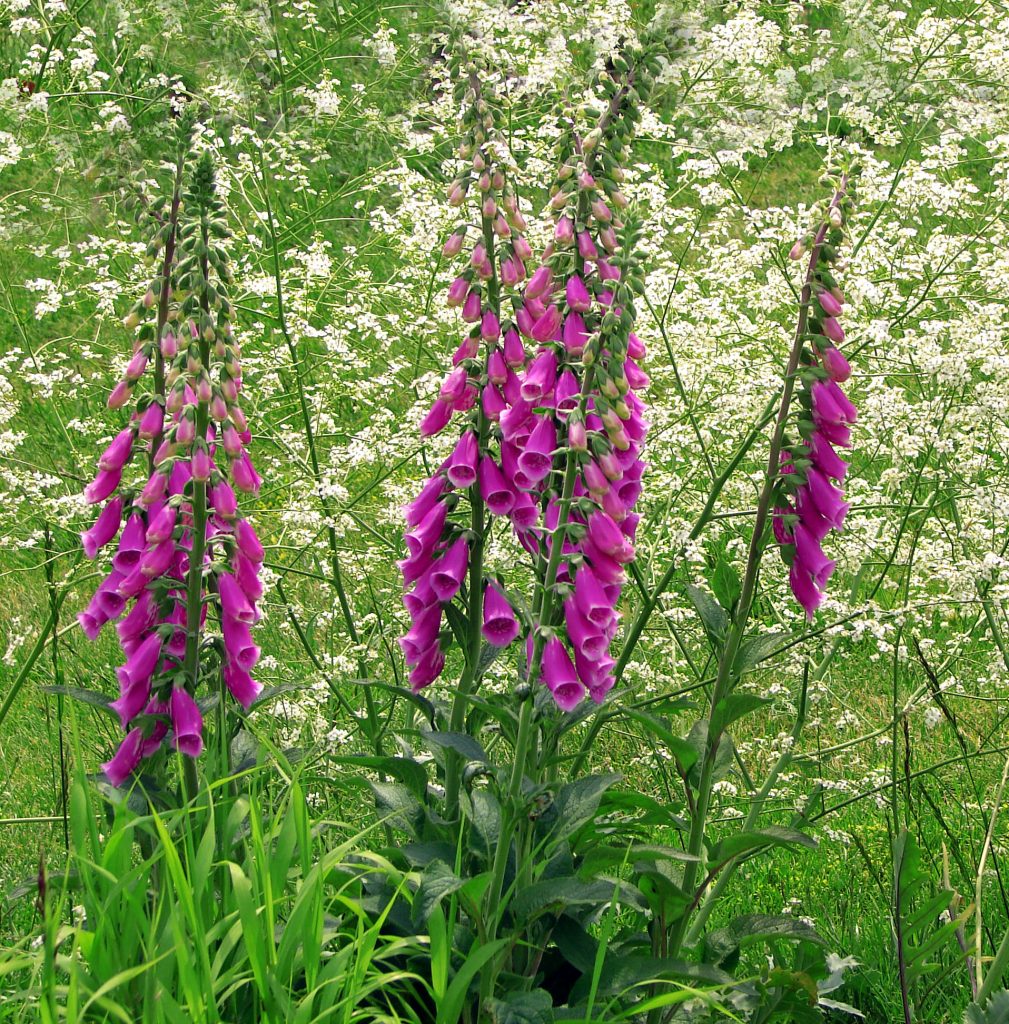 Foxglove flowers come from the digitalis plant, a source of a powerful poison. Photo: Wikimedia

Now we’re getting to the seriously dangerous plants. The seeds, stems, flowers and leaves of the foxglove plant are all poisonous. They contain “digitalis glycosides,” organic compounds that affect your heart. If you ingest any part of the foxglove plant, the glycosides cause an irregular heartbeat. Enough digitalis can lead to a lot of unpleasant symptoms and eventually death. 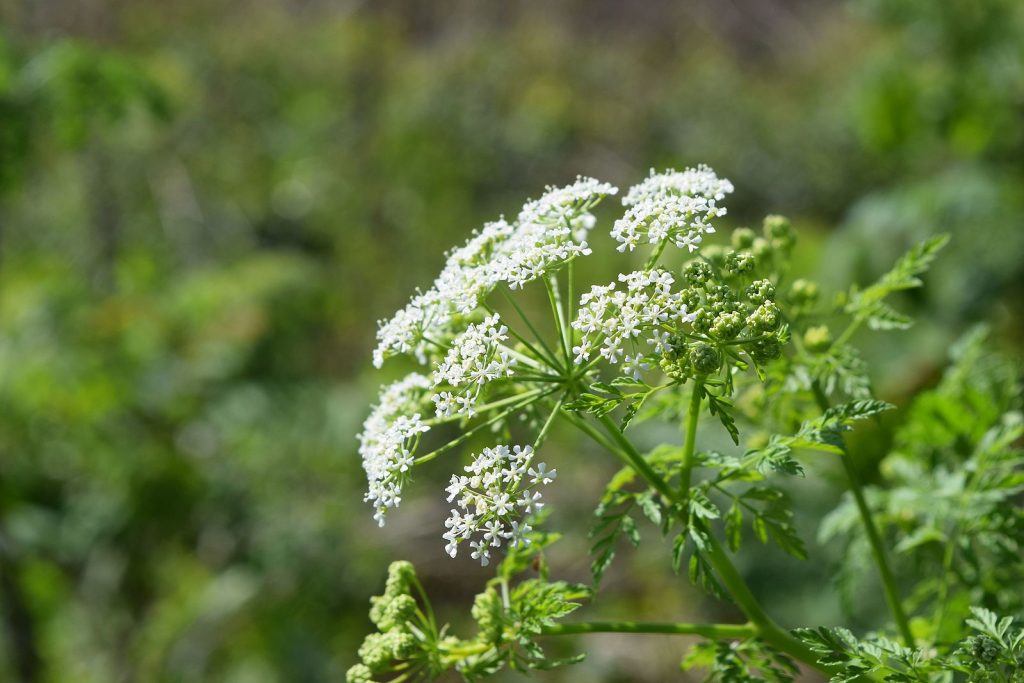 One of the most famous poisons in liiterature, from the hemlock plant. Photo: Wikimedia

Most people have heard of hemlock. But you might not be aware it is a plant. This is one of the most famous poisonous plants in history. Hemlock killed the philosopher Socrates. Shakespeare mentions hemlock in his plays. The entire plant is poisonous and it kills by paralysis of the nervous system. Hemlock is another introduced non-native plant to the U.S. You can find it in San Diego County – it is all over Tecolote Canyon. It resembles Queen Anne’s Lace and it looks a little like parsley. This is why it’s important not to rub your hands or bare skin on a lot of plants, and consider wearing gloves when hiking. Then wash up when you get home. 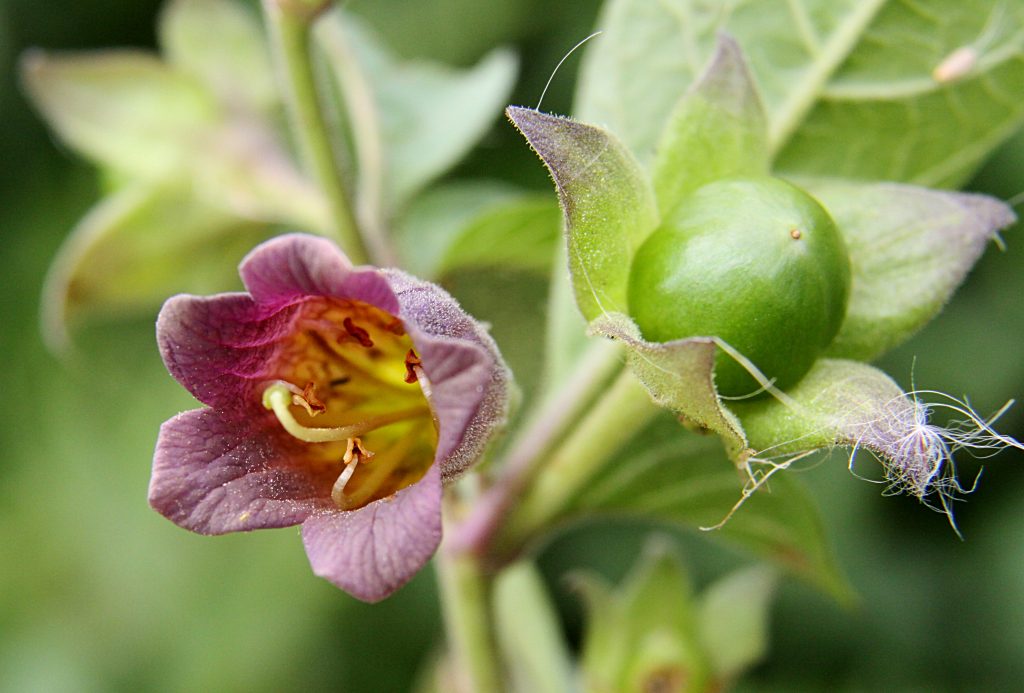 The name gives it away! Deadly nightshade also have toxins in every part of the plant. It comes from the same family as potatoes, tomatoes, eggplants and chili peppers. All of these plants also have mild versions of the same toxin as nightshade. People and pets should avoid the leaves of these vegetables. One of its cousins, Purple Nightshade, can be found in San Diego County’s mountains. Its flowers are a blue purple and approximately an inch wide. It blooms in spring to early summer. This plant is also poisonous to humans and some other animals, especially the fruits. 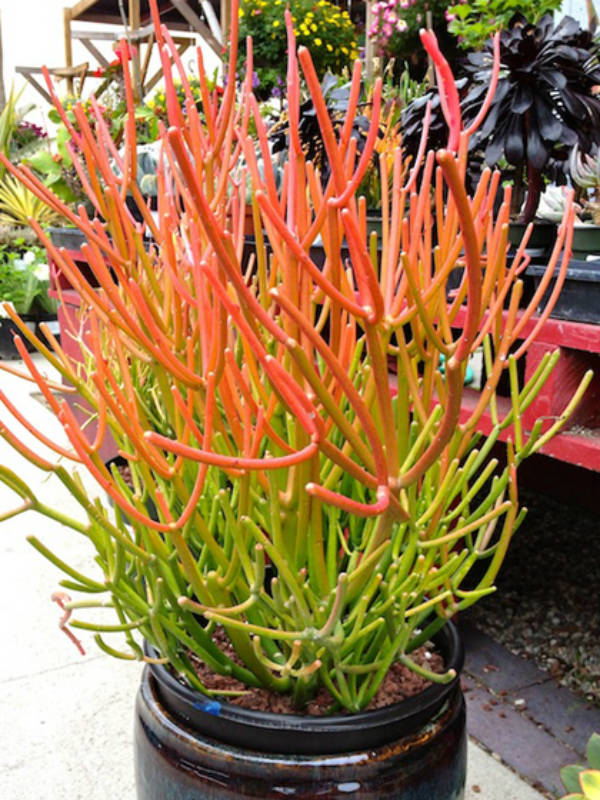 Firesticks are a common landscape plant, but their sap is extremely toxic and can burn skin and eyes.

Bright orange Firesticks, also called Fire Stick Pencil Cactus or “Sticks on Fire” have been used extensively in our gardens for the past few years. As a member of the Euphorbia family of plants, they are related to poinsettias – but with a sinister side. The sap is highly toxic, and if you are unlucky enough (as I was some years ago) to get any of it in your eyes, you’ll quickly learn that it’s not to be messed with. For several hours, I contemplated ripping my eyes out of my head to relieve the pain. Now that is an effective Halloween costume! Read more about my personal terror here. 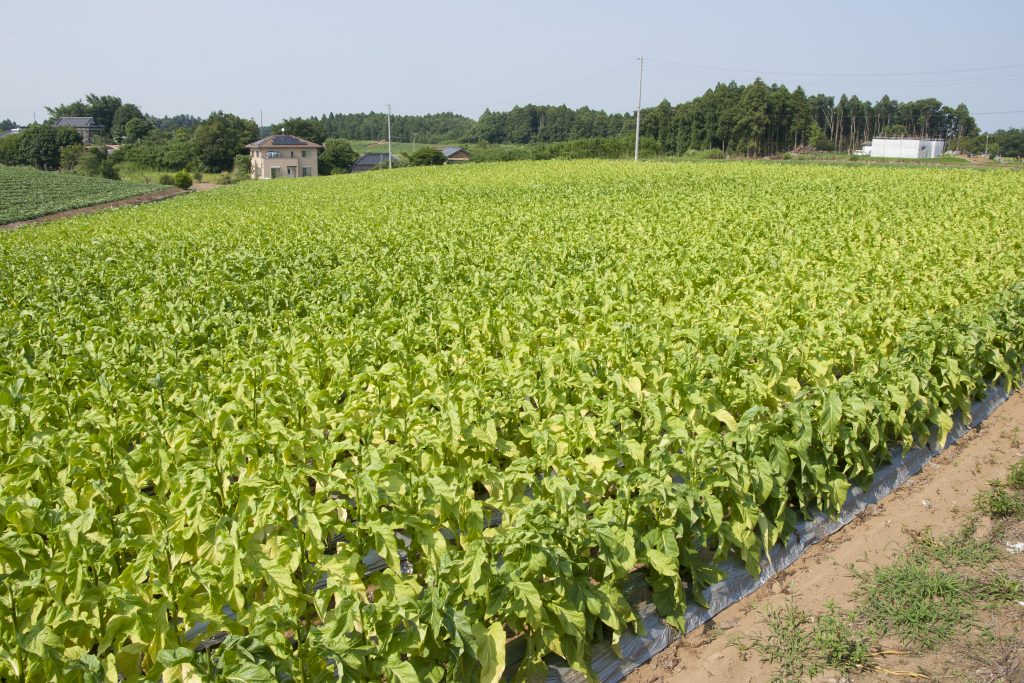 The plant that kills more people than the rest combined: tobacco. Photo: Wikimedia

The most deadly plant of all is responsible for at least seven million deaths every single year. Half the people who encounter it eventually die from it. It contains 4,000 different chemicals, and 250 of them are lethal. In case you haven’t guessed, it’s tobacco. This stuff is the real horror show.

If you enjoyed this bit of plant fun, you can learn more about deadly plants in Amy Stewart’s book “Wicked Plants.” I highly recommend it! It is available through Amazon.