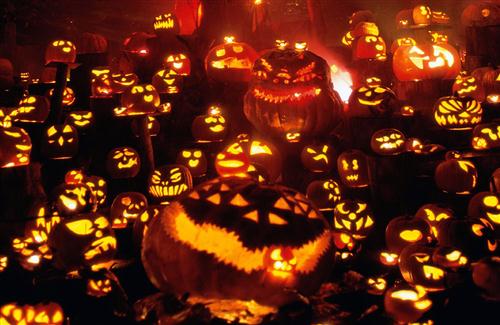 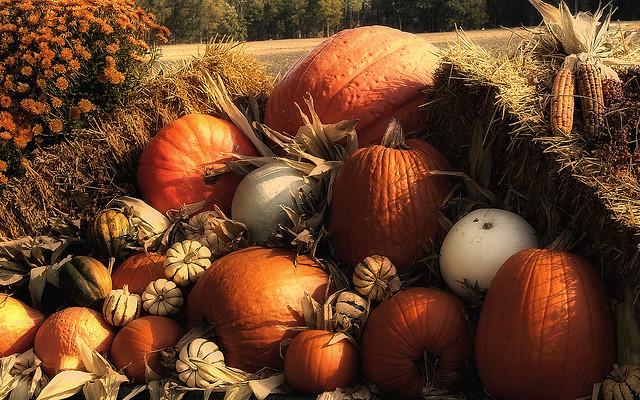 It’s pumpkin time! 80 percent of all pumpkins sold in the U.S. are sold in the three weeks before Halloween.

Halloween is on Saturday. For most Americans, you can’t have Halloween without pumpkins. Displaying a pumpkin or carving one into a traditional Jack-O-Lantern is a popular Halloween tradition.

We are out of our gourd about pumpkins at Good Earth Plant Company. In honor of this festive fruit (yes, it’s a fruit and not a vegetable), we present our Pumpkin Power Trivia. Orange you glad?

The tradition of carving pumpkins started in Ireland. The Irish originally used turnips and sometimes potatoes. They carved ugly faces into them to ward off evil spirits. When Irish immigrants came to America, they switched to pumpkins, which were larger and easier to carve.

The tradition of carving pumpkins came from Irish immigrants to the U.S.

The word “pumpkin” was first used in the classic fairy tale “Cinderella.” French explorer Jacques Cretier explored the St. Lawrence region and reported finding “gros melons” in (large melons) in 1584. In Latin, this became “pepon,” then translated into English as “pompions,” which evolved into the word “pumpkin.” Modern versions of the Cinderella story first appeared in Italian literature in 1634, and another in French in 1697, using the modern term “pumpkin.”

Pumpkins are grown on every continent except Antarctica. The United States is the undisputed heavyweight pumpkin champion of the world. We produce 1.5 billion pounds of pumpkin every year.

Eighty percent of our U.S. pumpkin crop is available in the month of October. The top producing pumpkin states includes Illinois, Indiana, Ohio, Pennsylvania, and California.

Pumpkins are fruits, actually a winter squash in the same family as melons and cucumbers. They are 90 percent water. They have more fiber than kale, more potassium than bananas, and are full of magnesium and iron. One cup of canned pumpkin has only a half-gram of fat and 83 calories.

Pumpkins have uses other than in pies. Native Americans used to flatten out strips of pumpkin, dry them, and weave them together to create mats.

In early colonial times, pumpkins started being used for pie, but not what we think of today. The fruit itself was used as a crust. It would be hollowed out, filled with milk, spices and honey, and baked in the hot ashes of a fire. I’m glad someone figured out a more tasty way to use pumpkin.

Did someone mention pie? The largest pumpkin pie ever made was baked in 2005. It was five feet across and weighed over 2,020 pounds – that’s a ton! It used 80 pounds of cooked pumpkin, 36 pounds of sugar, 12 dozen eggs and took six hours to bake.

It might have been easier if bakers used the world’s heaviest pumpkin. It weighed 1,810 pounds, eight ounces and was presented by Chris Stevens at the Stillwater Harvest Fest in Stillwater, Minnesota, in October 2010. 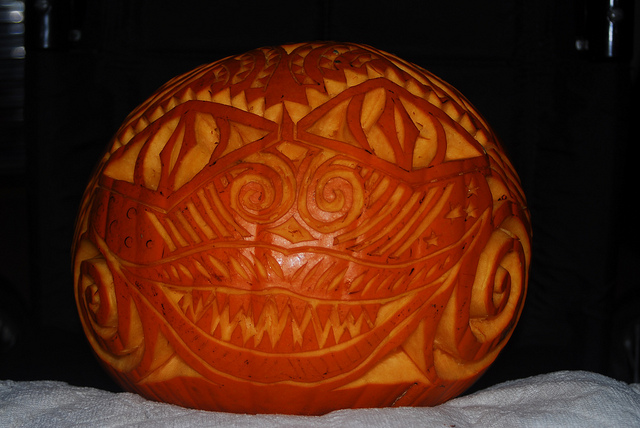 Whether your Jack-O-Lantern is simple or fancy like this one, enjoy it and have a happy and safe Halloween.

There are 45 different varieties of pumpkin. Some of our favorite names: Cotton Candy, Full Moon, Hooligan, Iron Man, Long Island Cheese, One Too Many, and Rock Star. Colors include red, yellow, green, white, and the traditional orange.

Pumpkins have been used as cures for a variety of medical ailments. They were used as a remedy for snakebites. They were recommended as a way to get rid of freckles. The seeds are supposed to prevent prostate cancer in men.

Every pumpkin has about 500 seeds. They take between 90 and 120 days to grow. The seeds can be roasted to eat, and they are high in iron. But why not spare a few and plant some to grow your own for Halloween next year instead? You can save them in a dry, cool place until Memorial Day. Plant them between the last week of May and the middle of June, and you will have your very own homegrown pumpkins to show off for Halloween 2016.

We tried planting pumpkins into living walls, but it wasn’t successful. Now that I think about it, we might have been in trouble if we had been successful, since pumpkins can grow beyond what most living walls could handle. Maybe we will try them on a green roof someday.

Happy Halloween from Good Earth Plant Company. We hope it is “spooktacular,” safe, and lots of fun.