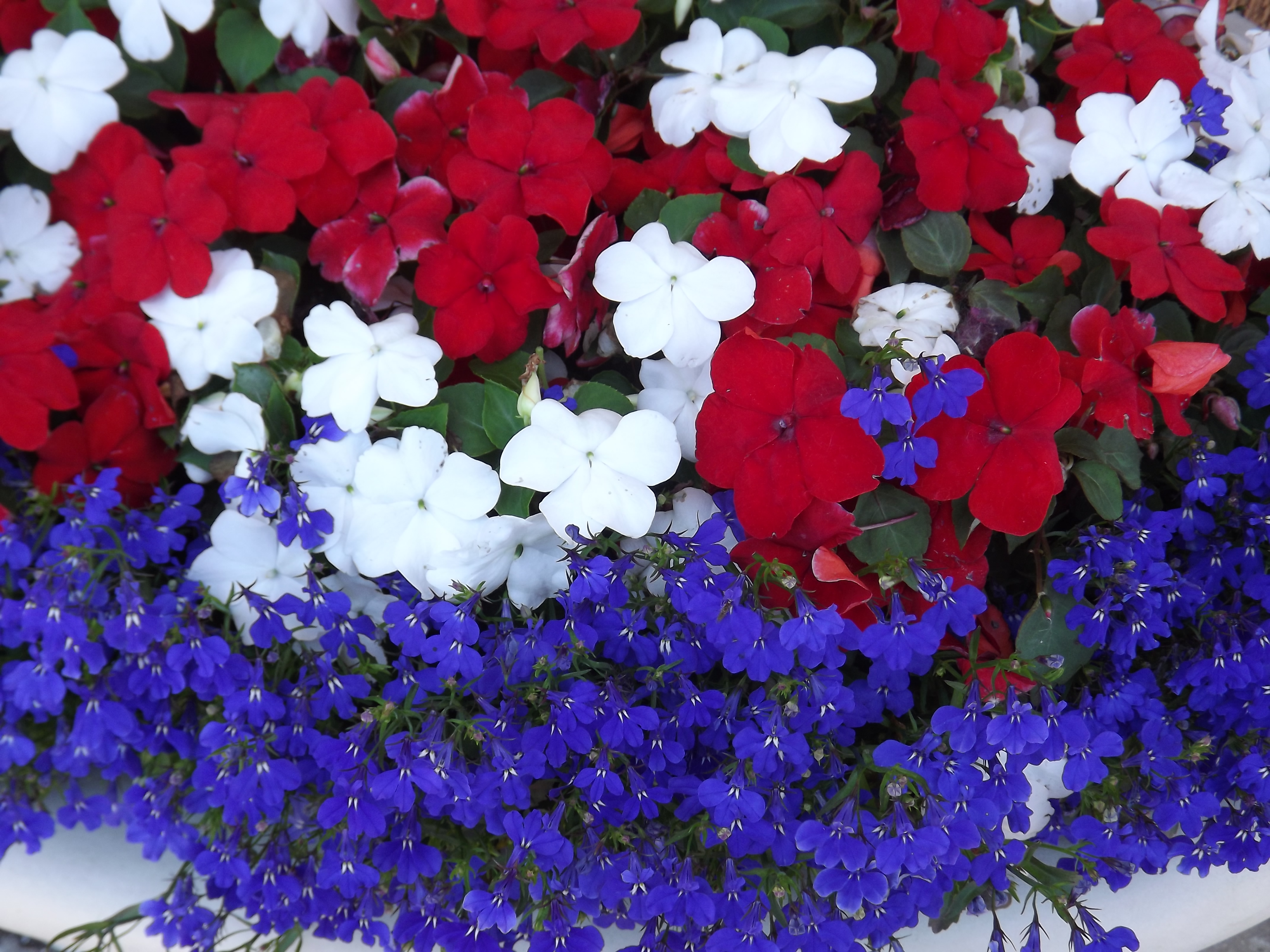 With the Independence Day holiday immediately ahead of us, I see people showing their patriotism with a lot of red, white and blue. American flags are flying. People are wearing their stars and stripes. They are even decorating their homes with red, white and blue plants and floral displays.

Back when I was still selling flowers downtown, the only thing I remember offering were red, white and blue carnation bouquets. I hate to break it to you, but those blue carnations aren’t found in nature.

You can find orchids, mums and Peruvian lilies and more dyed blue. Perhaps blue hydrangeas are close, but that comes from adding aluminum sulphate to the soil. Natural? I don’t think so. 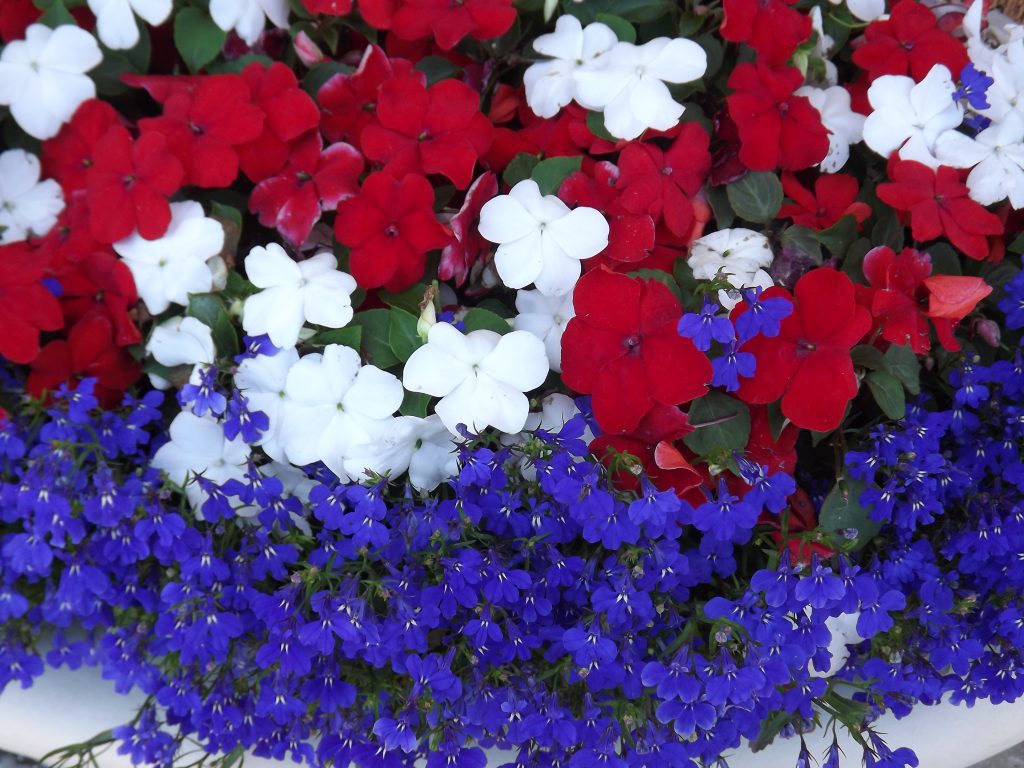 Finding blue flowers for your red, white and blue floral display this July 4 can be challenging.

Naturally blue flowers are more than rare: they don’t exist. True blue pigment doesn’t exist in plants of any kind. When you see a “blue” flower or plant, you are seeing other pigments and plant minerals combined with light to create the color you see as “blue.” Many of them are really purple or red, but once in a while there is a naturally blue-appearing flower. But it doesn’t mean people haven’t gone to a lot of trouble to try and create blue flowers to improve on the artificially colored type I used to sell. 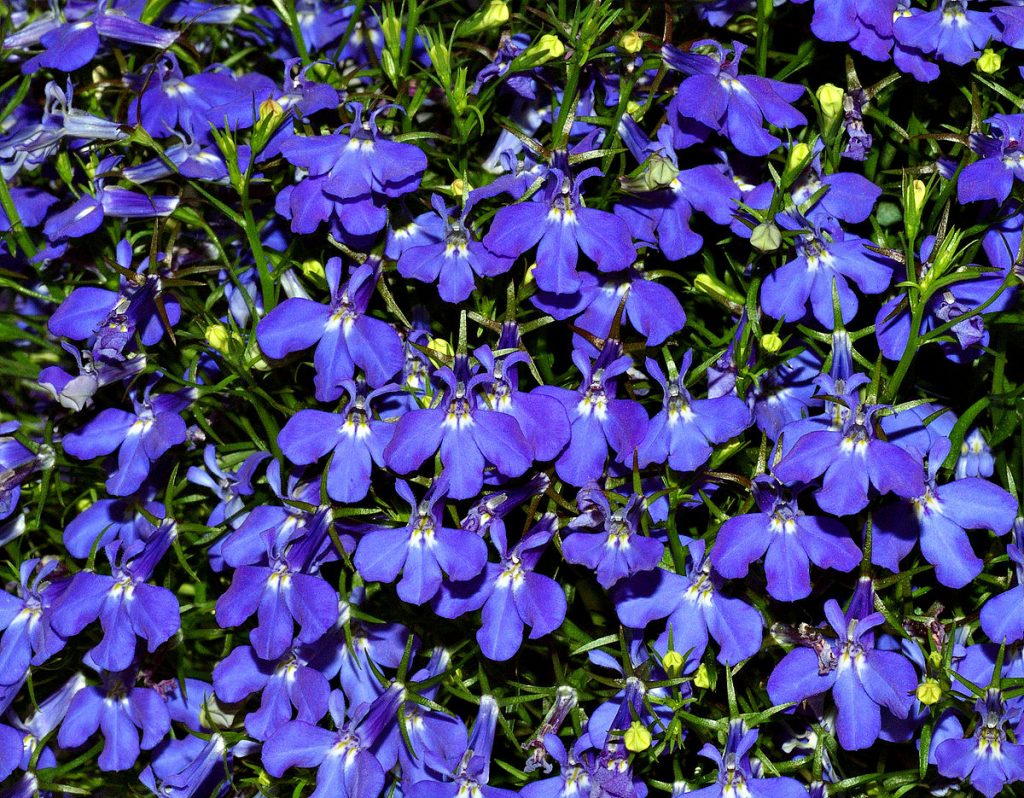 The Holy Grail of blue flowers is producing a blue rose. 130 years ago, author Rudyard Kipling wrote a poem about the futility of finding blue roses for his true love to symbolize seeking something unattainable.

Roses red and roses white
Plucked I for my love’s delight.
She would none of all my posies –
Bade me gather her blue roses.

Half the world I wandered through,
Seeking where such flowers grew;
Half the world unto my quest
Answered me with laugh and jest.

Home I came at wintertide,
But my silly love had died,
Seeking with her latest breath
Roses from the arms of Death.

It may be beyond the grave
She shall find what she would have.
Mine was but an idle quest –
Roses white and red are best. 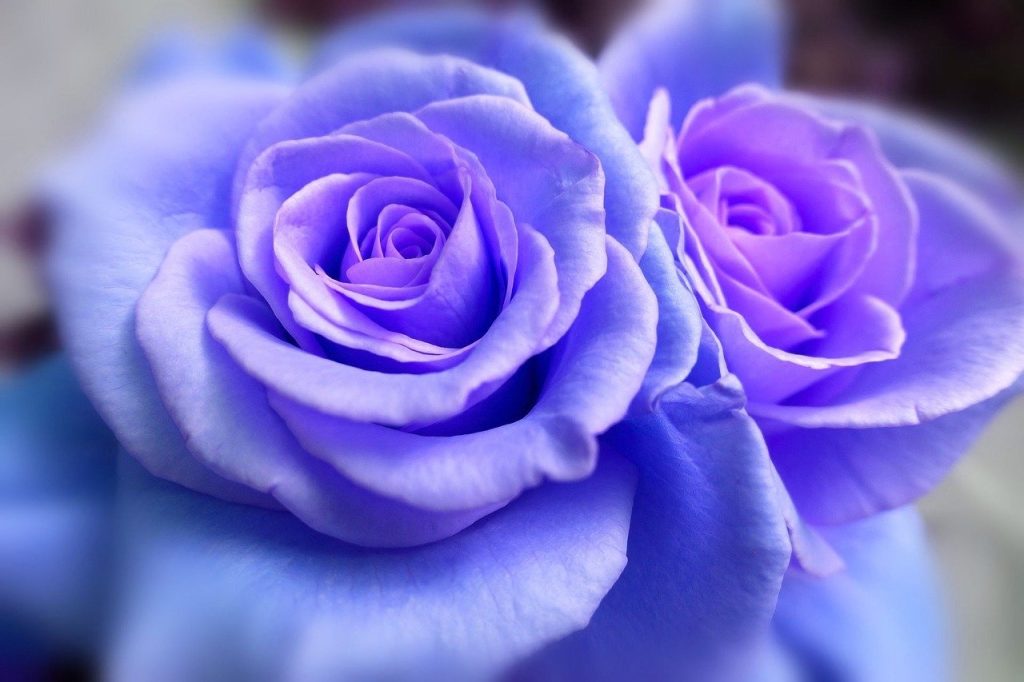 Japanese blue roses are as close as we have come to a naturally grown blue rose. Photo: Faye Monzingo

But the Japanese distillery company Suntory, working with Australian biotech company Florigene, produced a “blue” rose in 2009 using gene splicing. It took 20 years, but eventually researchers were successfully using genes from the pansy to produce the blue pigment Delphindin in a previously white rose. You can buy a single stem in Japan for 3,000 yen, about $27. That’s for ONE flower. 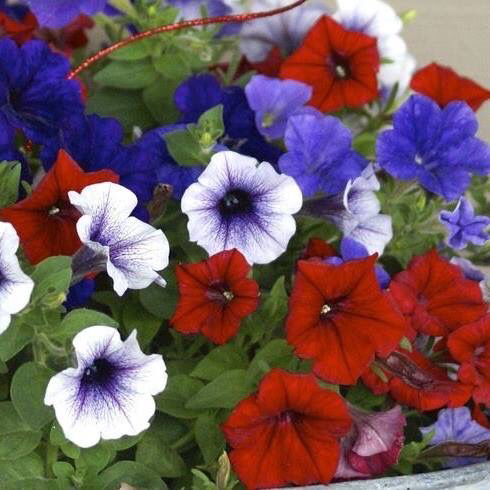 There are some flowers that come much closer and are far more available for your patriotic floral displays.

In a previous blog post, I explained my affinity for hyacinths thanks to my grandfather. Grape hyancinths (Muscari spp.) are long-lasting, naturally blue flowers in shades from very pale powder blue to a deep purplish navy blue. They are a springtime bulb but they can grow indoors too.

Bachelor’s buttons, also known as cornflowers (Centaurea cyanus), have intense little blue flowers and grow from spring to fall. This is a European flower. There are a lot of interesting hybrids created by seed companies so you can find many interesting varieties in nurseries.
Delphiniums (Delphinium spp.) produce naturally blue flowers thanks to the plant pigment delphinidin. This is the substance Suntory used to create its blue rose.

Irises are more commonly lavender or purple, but where there is purple, breeders can push the flowers toward a blue-purple. Irises are bulbs and they come in a tremendous amount of shapes and color patterns.

You’ll often see Agapanthus in Southern California yards. They are hardy and don’t require much water. They tend toward lavender, but there are varieties very close to blue. 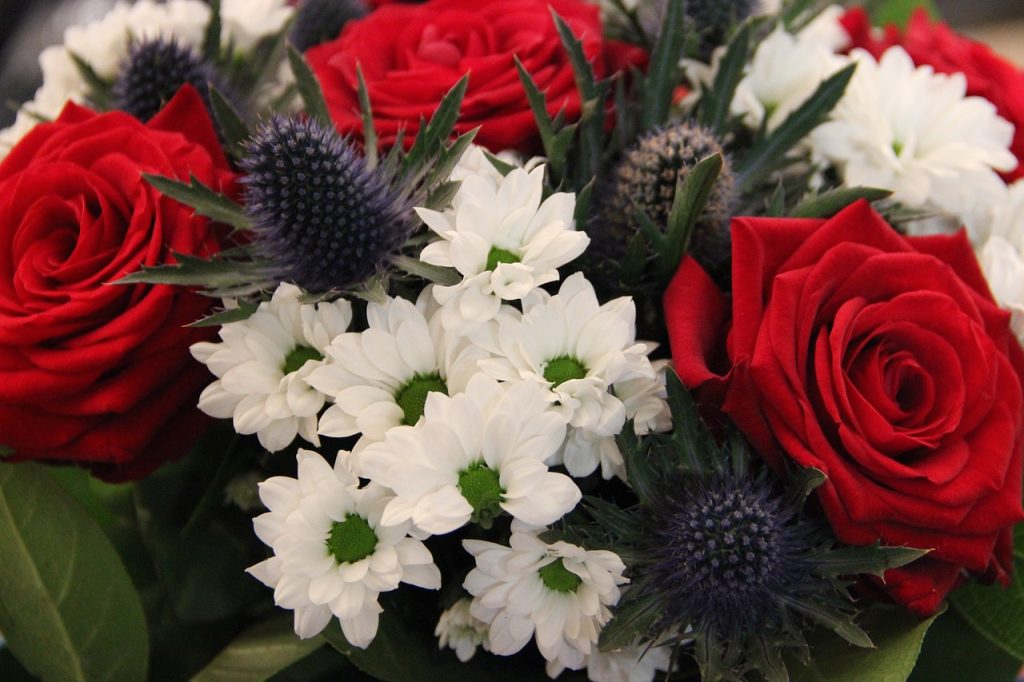 For patriotic floral arrangements, you have to get creative with the “blue” contribution. Photo: Angela Molina

Buddleia, or “Butterfly bush,” has beautiful flower spikes that can produce blue. Butterflies love them, and hummingbirds do too. The company Michigan Bulb produced a buddleia that is red, white, and blue on one plant!

Lobelias produce color saturated flowers in various shades of blue and they are an easy-to-grow garden favorite. Lobelia is actually an herb which used to be called Indian tobacco. It was used as an herbal remedy for asthma, bronchitis, and cough. Native Americans smoked lobelia to treat breathing disorders. There are 415 different species of lobelia around the world. 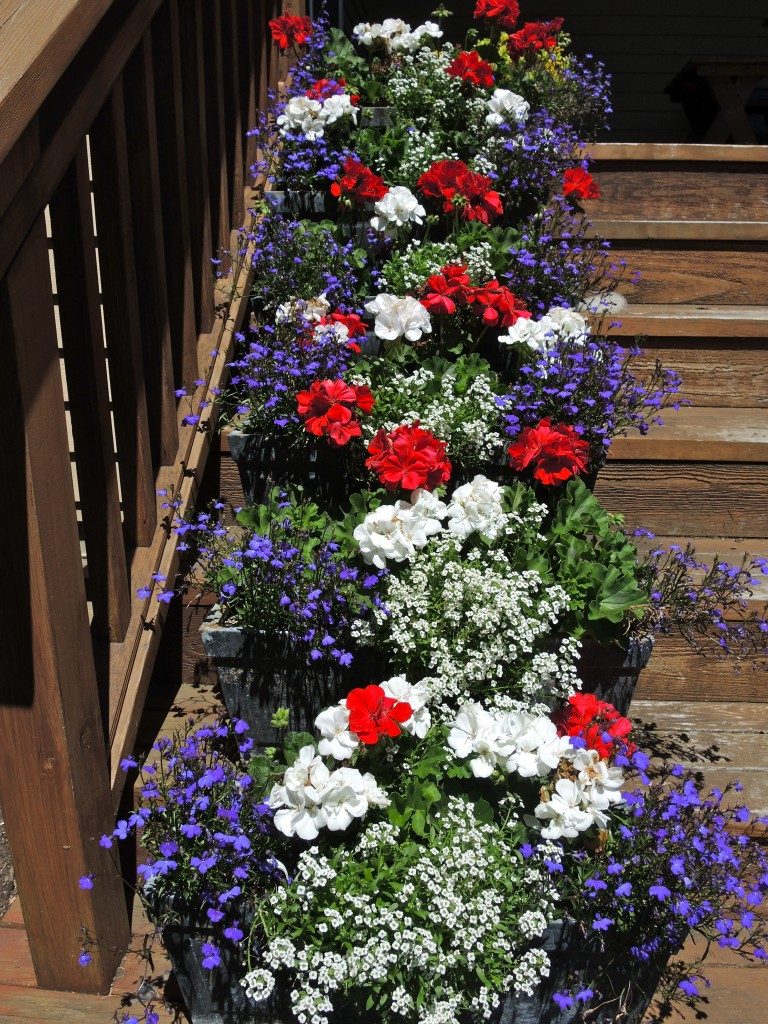 Petunias are one of the most popular flowers to grow in the U.S., partly because they come in such a wide range of flower colors, shapes, and patterns – including blue or blue-tones. They are easy to grow and have few pests. Petunias are members of the Solanaceae or nightshade family, which includes tomatoes, peppers, potatoes, and tobacco. Petunias were first discovered in South America 200 years ago. European breeders experimented with crossbreeding to develop larger flowers and more colors, and American breeders have continued to develop new colors every year. They are available in shades of white, yellow, pink, blue, purple, red, and even black, as well as bicolors, and as single or double flowers. Many have a light, sweet fragrance, especially the blue petunia varieties. Petunias will last four to six days as cut flowers too.

With so many colors to choose from, petunias are fun to combine into designs. This is why they are the go-to favorite in many patriotic flower arrangements and in the color bowls sold at this time of year in many garden departments.

However you celebrate, all of us at Good Earth Plant Company wish you a safe and colorful Independence Day!