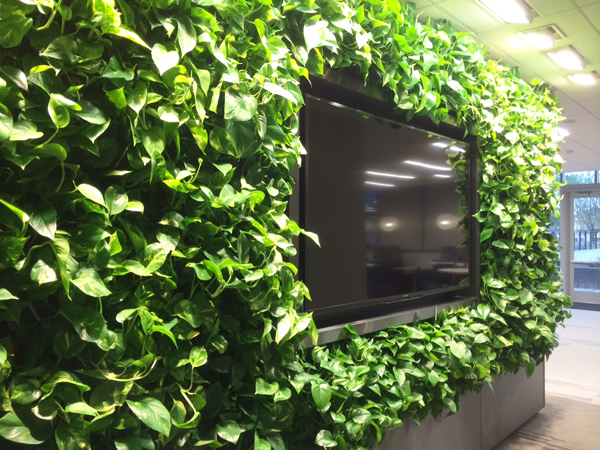 Take a look at our latest: the innovative living wall at LPL Financial including a flat screen TV display.The crew at GreenScaped Buildings stretched its creativity for LPL Financial to design and install a “Living Frame” for its new lobby. It even comes with a remote control.

LPL Financial in downtown San Diego wanted something amazing for a high visibility area. The idea grew into a two-sided living wall of greenery surrounding a flat screen on one side. The 360-degree installation came with a few challenges, easily met by the GreenScaped team led by Project Manager Kerry Bauer.

With plants located above and adjacent to the TV, multiple precautions were designed into the system to prevent any possibility of water reaching the electronic components.

The living wall used an ASI tray system that was installed with a post-production irrigation system. The trays allow for water to be transported to the plants through a “wick” system that draws water to the roots as needed. Because of the indoor location of the wall, the contractor added grow lights to augment the natural light in the lobby area. The two sided, 320 square foot living wall is 16 feet wide and 10 feet tall. It includes 300 six inch pothos in two varieties, selected for their particular hardiness indoors and their ability to adapt to artificial lighting.

The biggest installation challenge: due to the 13 story building being located in a commercial area that had a noise curfew, all deliveries and set up began at 5 a.m. and had to be completed by 6:30 a.m., not an easy task for assembling a large wall filled with live plants.

“We are grateful to have been a part of this living wall and we look forward to future projects with LPL Financial and Hines,” says Mumford.