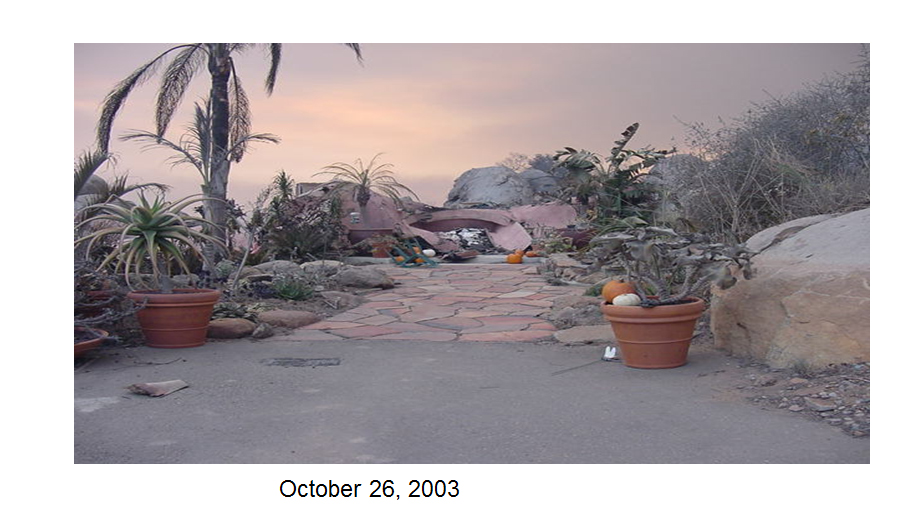 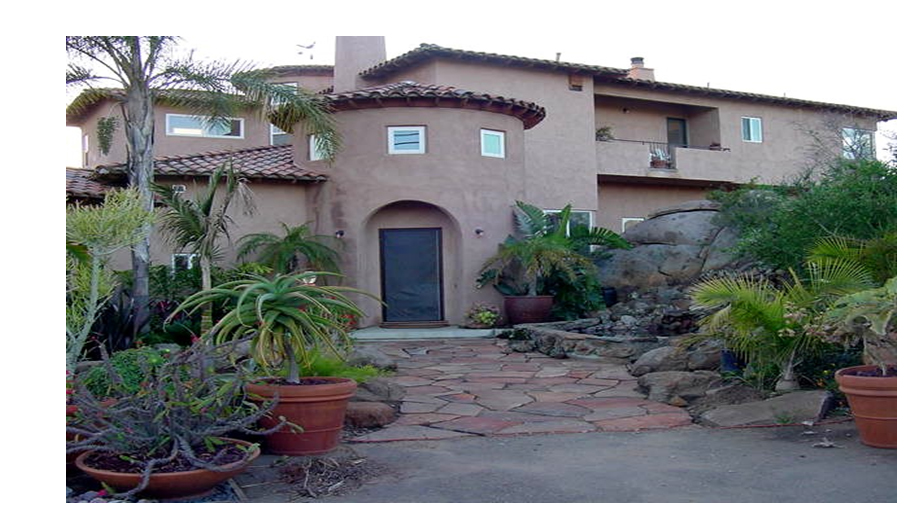 The Mumford home before the October 2003 Cedar Fire

The remains of the Mumford home after the Cedar Fire.

Watching wildfires burn across Southern California including close to home in the Bonsall and Fallbrook areas of San Diego County is sobering, especially for a wildfire survivor like me. Most of you know my own story: my home in the Muth Valley area of Lakeside in San Diego County burned to the ground in the Cedar Fire of 2003. I wrote about the experience in a journal shortly after it happened, and posted it to this blog page several years ago. You can read it here.

Some of us do a better job of preparing for this inevitability than others. I thought I was well prepared 14 years ago. My house was built from stucco with a tile roof, tucked into the top of the hill for protection. Just a few months before the fires, I had spent $4,000 on a project that cleared brush to provide a more defensible space. My home was about as fire safe as I could reasonably make it.

After the fact, you wonder whether there was anything you could have done to save your home. In the case of the Cedar Fire, it was so large, so hot, and so fast moving because of all the fuel in its way, my personal efforts weren’t enough. There is no landscaping, no plants, and no structures that can stand up to the heat of such a big fire and the wind blowing the embers long distances.

But we aren’t completely helpless. Fires need three things to burn: heat, oxygen, and fuel. It’s hard to reduce the high temperatures of a wildfire and cutting off oxygen is impossible. The one element in this equation we can control is fuel.

Create defensible space around your home to protect yourself from the threat of wildfires.

Thick vegetation shouldn’t be right up against your home. It can help ignite the structure, and it will also get in the way of firefighters and equipment trying to get into position to defend your home.

If you live near or against steep slopes, especially at the top of those slopes such as along a canyon rim, you have extra reason to be concerned. Fire moves upward. Fire lower on slopes pre-heats the air and fuel above it, and increases in intensity. This was the case with my hillside home. You can slow this way down by terracing a steep slope. It also has the benefit of allowing rain or irrigation to soak in deeper instead of running off, which also aids in wildfire protection.

So what to plant on those terraces, slopes, and around your home? First, there are no plants that are completely fireproof. Anything will burn when a wildfire is hot enough. But you can at least stack the odds in your favor. 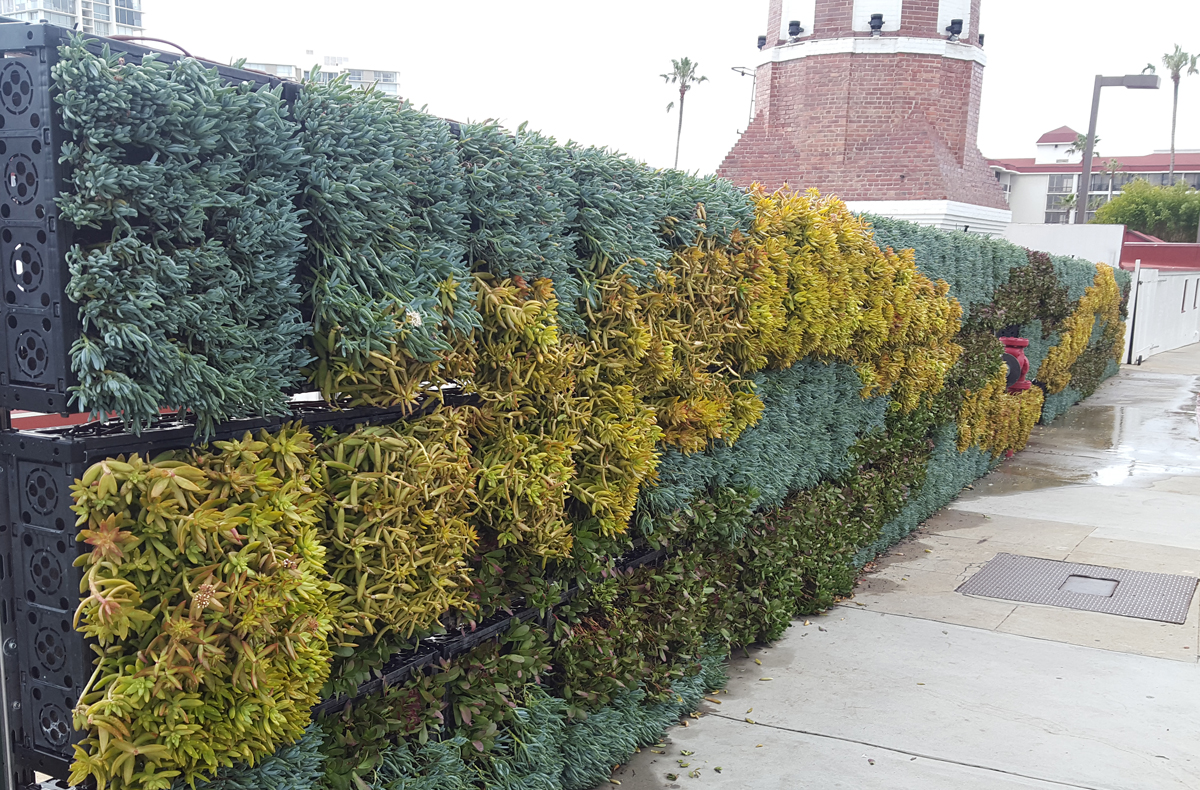 Good Earth Plant Company included succulent in the living wall we built earlier this year at the Hotel Del Coronado.

Look for plants with the following qualities:

Succulents possess most of these qualities. Agaves, Aloes, and Euphorbias do a good job slowing down flames. They store water in their leaves and stems against dry conditions naturally. There are many other types of succulents and they all make good choices for planting in our naturally arid climate.

My colleague, succulents expert and author Debra Lee Baldwin, recently posted an incredible video tour with Bonsall homeowner Dr. Camille Newton. Her home was in the path of the recent Lilac Fire, but it survived with just a little scorched ground. Dr. Newton is convinced her beautiful and extensive succulent garden helped protect and save her home, and told Debra Lee, who went out to see it for herself. Seeing really is believing – so with her permission, here is Debra Lee’s tour.

This is the perfect time of year to add succulents to your landscaping, before our rainy season (or what passes for it in Southern California). Debra Lee’s books on succulents, “Designing With Succulents” (the brand new 2nd edition) and “Succulents Simplified” will give you a lot of help and great design ideas. Great gifts too! Visit her website for the books and many other resources.

We were pretty excited to find our Pure Fitness living wall project is featured in Debra Lee’s new edition of “Designing With Succulents.” Thank you! Many of our living walls and green roofs include succulents. 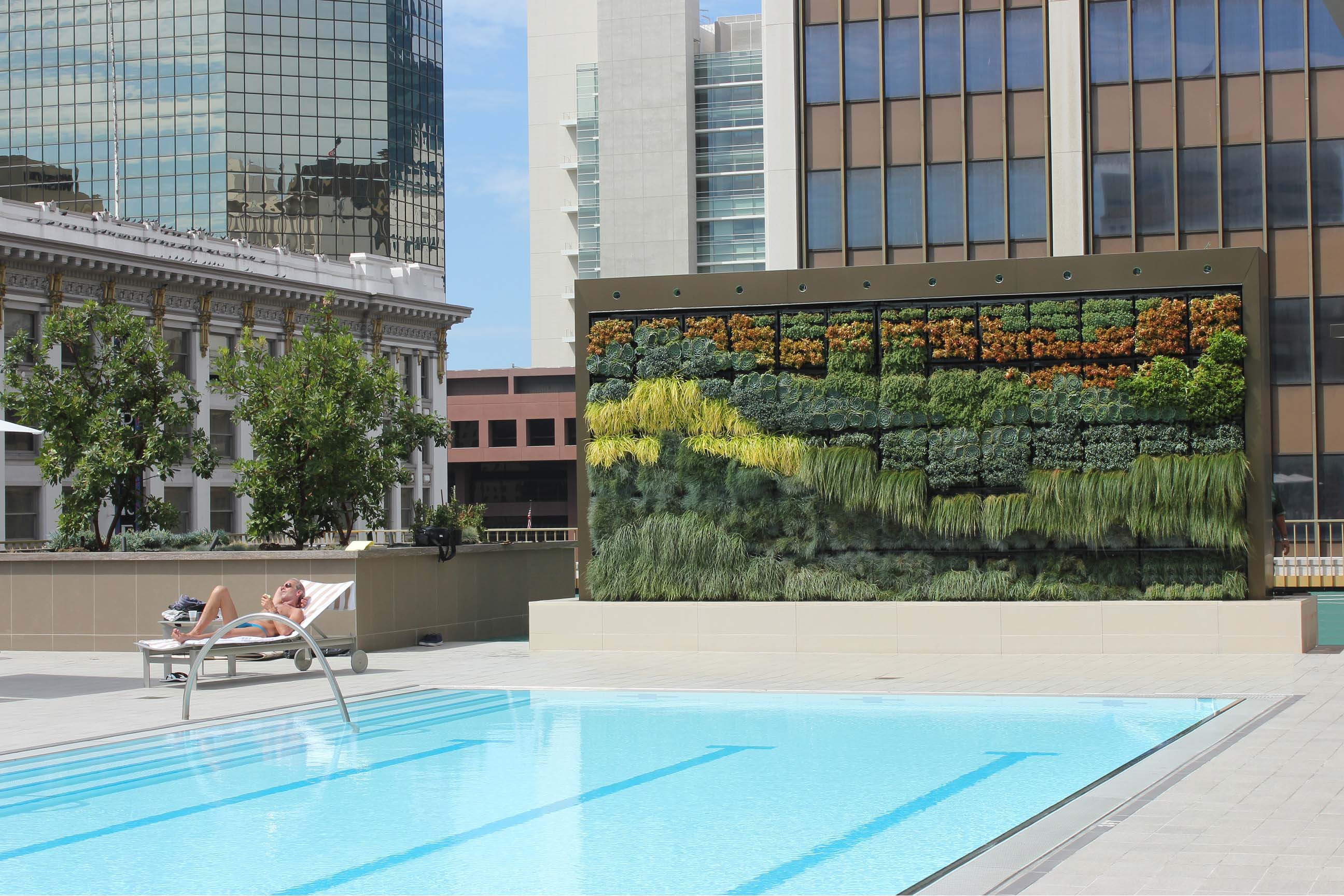 Our spectacular living wall at the Westgate Hotel is featured in Debra Lee Baldwin’s all new edition of “Designing With Succulents.”

Even the most fire protective landscaping won’t help you much if you aren’t performing regular landscape maintenance. Succulents and other landscaping close to your home still needs regular irrigation. Even in times of drought, strategic watering is a must to keep plants strong and healthy.

You also need to remove all dead plant materials and debris on a regular basis. Wildfires love dead leaves and branches as fuel. If you stopped watering your lawn but never removed the brown, dead stuff, do it now. Clear leaves, dead brush, and trim your trees so there is at least a foot of clearance between the ground and the lowest branches and leaves.

We are learning that wildfire season is year-round in Southern California. While you can’t completely fireproof your home with landscaping, you can give yourself a fighting chance of survival like Dr. Newton did by making sure you aren’t adding any fuel to the fire, literally.