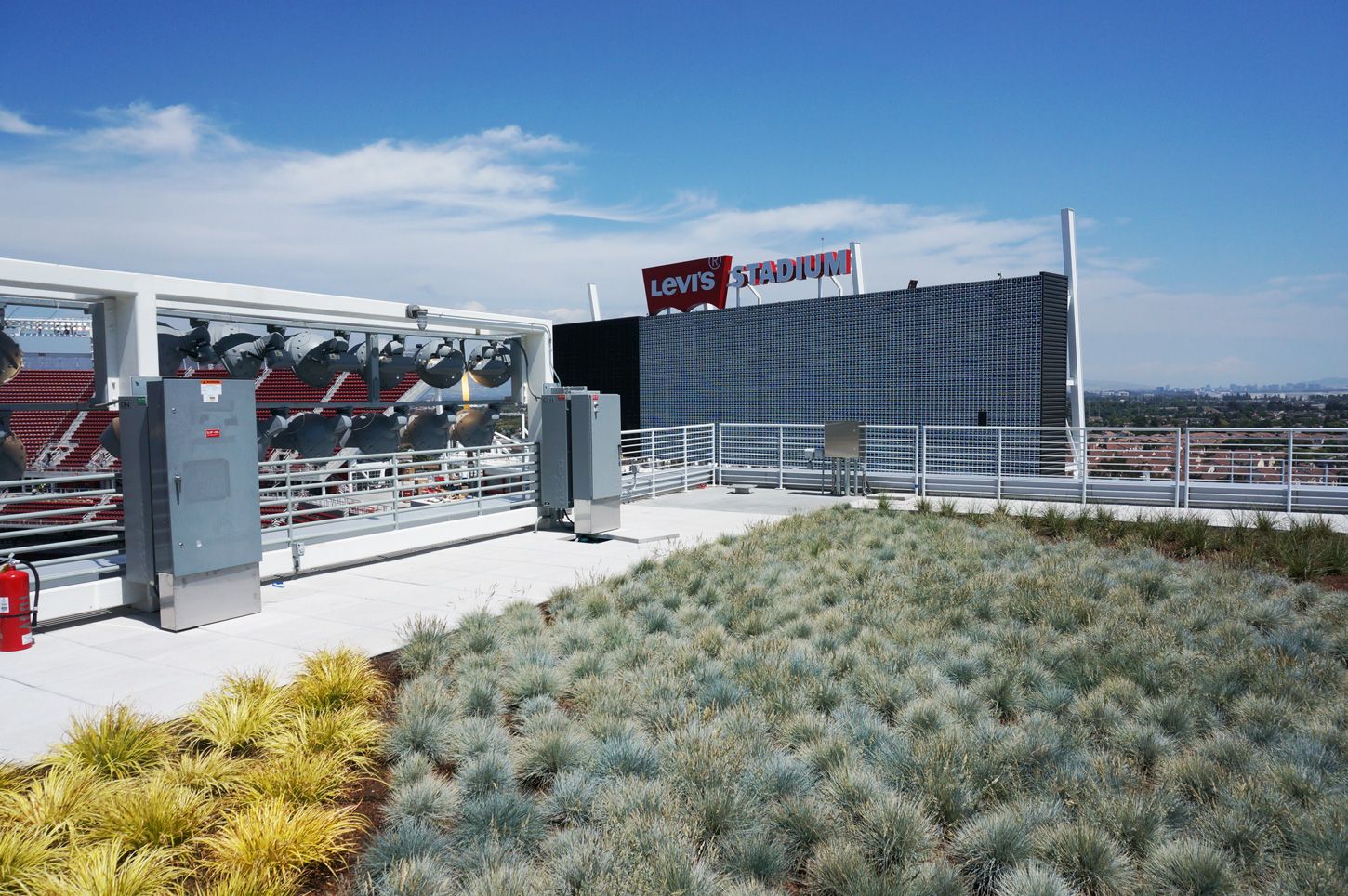 Super Bowl 50 is just days away. Are you rooting for the Broncos or the Panthers? Or are you tuning in for the commercials, not the game? Looking forward to Coldplay and Beyonce?

I’m excited about Super Bowl 50 because it is taking place in the first ever professional football stadium to be LEED Gold certified. Levi’s Stadium in Santa Clara, California is the most eco-friendly, sustainable stadium in the world today.

Levi’s Stadium, the home of the San Francisco 49ers, is a typical multi-purpose modern stadium that can host all sorts of events. What sets it apart starts at the top: the NRG Solar Terrace green roof on the west side of the stadium. The 27,000 square foot green roof includes 16 species of native Bay Area plants including some being used in the stadium’s “farm to table” concessions. No greasy fries or goopy nachos here! All of the concessionaires and other divisions within the stadium compost as much materials as possible.

It has three “solar bridges” that connects the stadium to the main parking lots. There are 1,186 solar panels that generate 375,000 kilowatts of power, enough renewable energy to generate all the power used during the 10 home game days. We’ve written before about the synergy between green roofs and solar power systems. Green roofs improve the performance of the panels. 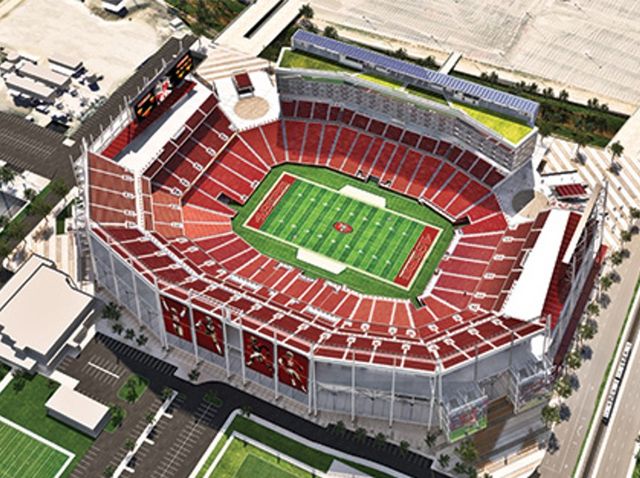 An aerial view of Levi’s Stadium, with the green roof at the top of the photo. Courtesy Greenroofs.com

The green roof provides additional benefits just as green roofs of any size do: evapotranspiration cooling, limiting stormwater run-off and it reduces the urban heat island footprint of the stadium. It adds biodiversity to an otherwise sterile environment. Reclaimed water is used for both potable and non-potable uses such as the irrigation for the football field. Because the system is connected to the City of Santa Clara’s recycled water system, 85 percent of the water used at the stadium is recycled.

Stadium visitors can view a live, real time dashboard display on the roof showing the current energy measurements, water and air monitors, and readings on the stadium’s various green features throughout the day. If you ever visit Levi’s Stadium, look for it between the 49ers Museum and Team Store.

When the stadium isn’t being used for a game, the 27,000 square feet of venue space on the NRG Solar Terrace Green Roof covered with 23,000 square feet of Ultimate Assembly pavers can be booked for parties, weddings and receptions, you name it. 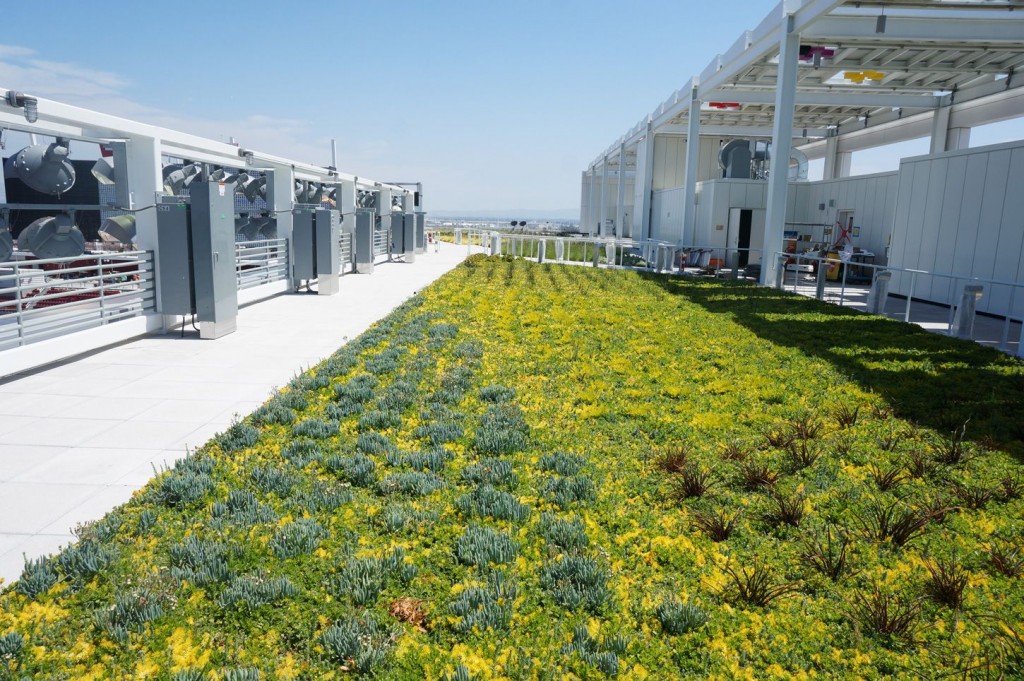 There is no reason a new San Diego Stadium shouldn’t feature an even bigger and better green roof than Levi’s Stadium in Santa Clara. Photo: Courtesy Levi’s Stadium website

In every aerial shot you see on Super Bowl Sunday, you will see the green roof and solar panels showcased. 49ers president Paraag Marathe said, “”Just like the pirate ship at Raymond James Stadium or the hole in the roof at the old Texas Stadium, the green roof atop the suite tower will serve as Levi’s Stadium’s distinguishing feature.” Yes!

Take a tour of the stadium in this video from GreenRoofs.com

The Levi’s Stadium green roof is one of six green roofs on sports facilities in the United States. The six make up a group called the Green Stadium Alliance. Along with Levi’s Stadium, there are green roofs at the Barclays Center in Brooklyn, New York; Target Center in Minneapolis; Citi Field in Queens, New York; Fenway Park in Boston, and Nationals Park in Washington D.C.

While you watch the battle between Peyton Manning and Cam Newton, or get excited about seeing Coldplay and Beyonce at half time, I’ll be checking out the green roof during the game. OK, and I will be watching the game and the commercials too.

Hey Dean Spanos and Mayor Faulconer, when you’re ready to build a new San Diego Chargers stadium, Good Earth Plants and GreenScaped Buildings can build you an even MORE spectacular green roof. Perhaps make it an edible green roof as we called out in a previous blog. Call me Dean!