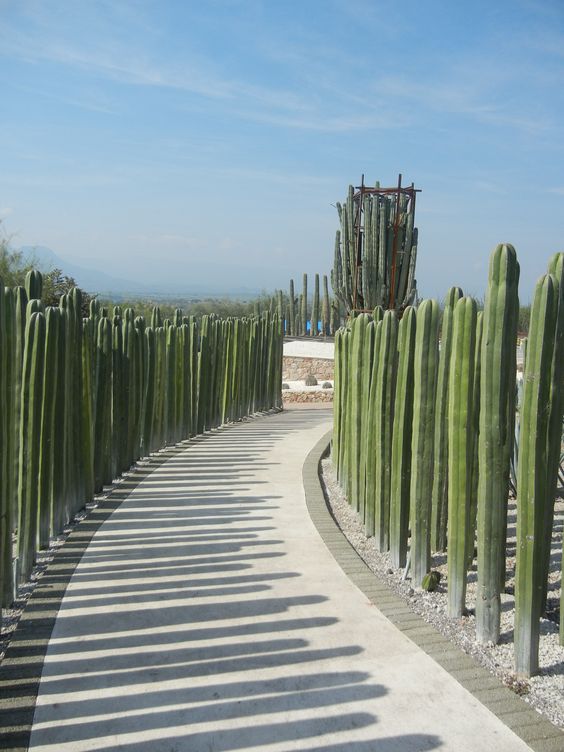 Cactus living walls or fences can be practical and beautiful.

People and civilizations have put up walls throughout human history. Some of the world’s greatest structures are walls: the Northern Wall built by the Romans to hold back the Barbarians; the Great Wall of China, and even the Berlin Wall. It is amazing how these walls were constructed without having any of the engineering tools or technology at our fingertips today.

Over time, Nature has a hand in ‘decorating’ these walls. In some cases, the walls become ruins and become part of the natural landscape. In other cases, Nature takes advantage of these man-made structures.

This is where people like me and companies like Good Earth Plants and GreenScaped Buildings have combined the best of both to create living walls for our homes, businesses, and communities.

When anyone talks about building a wall, I naturally think about a living wall. I’m far from the only one.

Some living walls are completely made of cactus, like this fence in Oaxaca, Mexico.

In the southwestern United States, in Mexico, Australia, and in other arid climates like the desert islands of Bonaire and Aruba in the Caribbean, people have used the materials naturally available to them to construct practical living walls: fences out of plants which have their own natural protection: cacti and succulents.

Cactus and some succulents have sharp spines and irritating sap which protect them from being eaten by birds and animals in harsh, arid climates where they look attractive as food sources. They also make them a naturally protective barrier around your home in arid locations.

Have you ever seen a cactus fence? They are made of closely spaced living cactus plants, sometimes built against a frame of barbed wire or wood interwoven with the cactus. Cut from living plants and sunk into the ground, they will grow and flourish with a little water, and survive in nearly any condition. 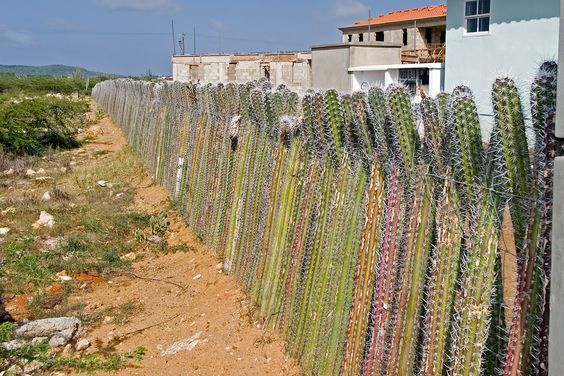 This style of living wall built from cactus is common on arid Caribbean islands like Bonaire.

Originally, these fences kept large animals from wandering away from a property, and predators out. No coyote would think it worthwhile to tangle with a cactus to get at a goat. They will also turn away all but the most determined human beings. If you’ve ever accidentally brushed up against any cactus, the spines of a Cholla or prickly pear would make any thief think twice about breaking into your property.

I ran across video of a man building a cactus fence on the island of Bonaire. It’s pretty amazing how he does it with just a few tools and a machete – and no gloves! It’s fascinating to watch him. You know he’s been doing this for decades.

Here in the American southwest, ocotillo stems are often set into the ground to form a fence. Ocotillo are succulents that grow naturally in our deserts. The Rancho Lobos nursery in Hermosillo, Sonora, Mexico, furnishes ocotillo pruned responsibly from living plants for fences. Take a look at photos from their operation’s Facebook page. It’s cool stuff. 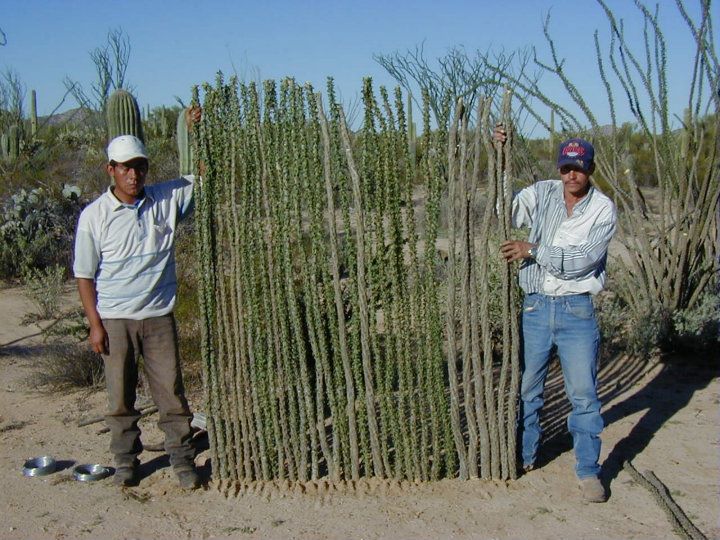 White Dove Farms in Santa Paula, California (east of Ventura) has a DIY tutorial on its website about how to build your own Living Cactus Fence.

Cactus fences don’t have to be super tall to be effective. You could use stiff-spiked golden barrel cactus (Echinocactus grusonii) which are only about two to three feet, but round. These can be placed under windows. Prickly long-spined barrel cactus (Ferocactus emoryi) can be placed along fences. It reaches six to eight feet. 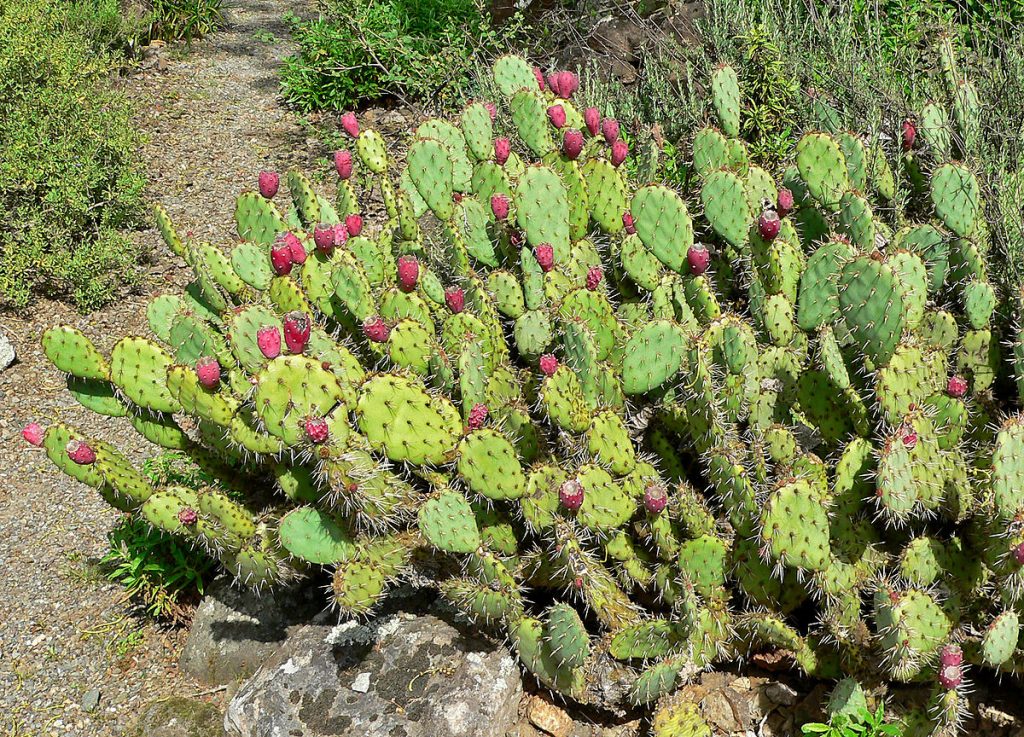 Planting masses of cactus can create a natural barrier where need one. But be sure kids and pets won’t run into it!

Cholla or “jumping cactus” would make a truly secure fence. Most people aren’t big fans and if you’ve ever brushed against one, you understand. This plant has spiny pads that will stick to anything: clothing, shoes, or your skin. Once it’s on you, it’s hard to pull off because it is covered with hollow spines with the ability to curve and hook into you after they have made contact. It’s painful just to describe this. People think the spines actually shoot out at you if you get close, but the truth is that it takes the barest brush against them to come out.

Cholla can be very pretty with their golden spines and pink flowers. But you have to look and not touch. If you can’t plant in an area where your children and pets won’t be hurt by it, it’s certainly effective. 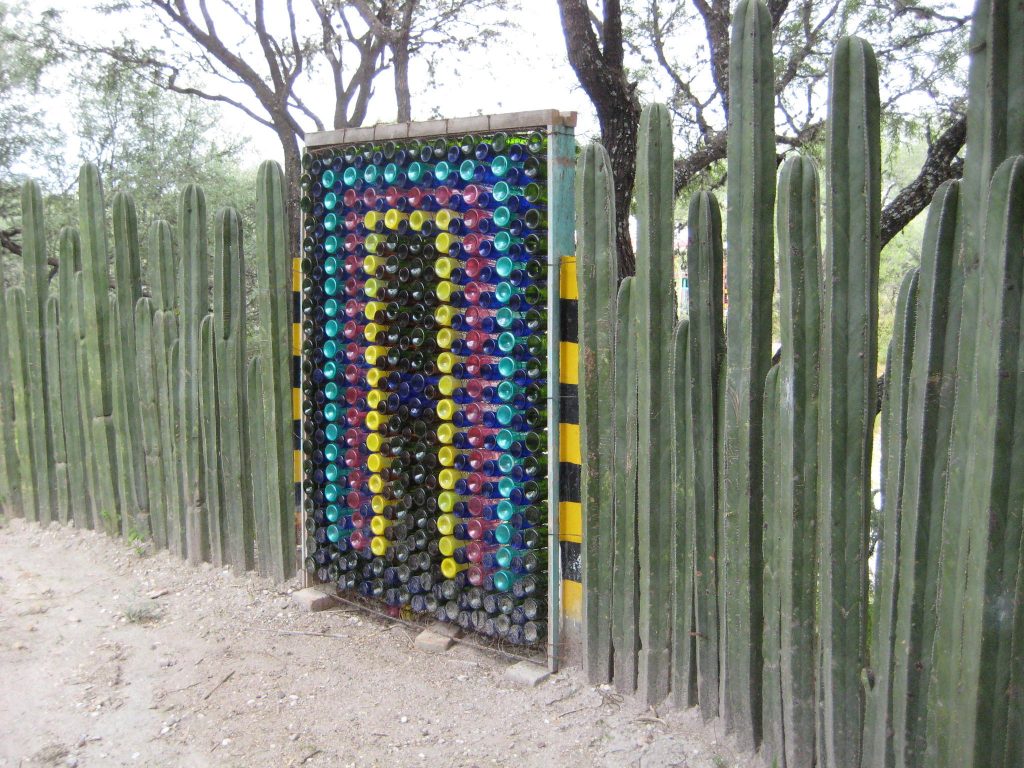 Take precautions around your protective plants of all kinds, because they can’t tell the difference between a burglar and your toddler, or the family dog from the coyote in the canyon. But a cactus barrier can be as good as a watchdog and you don’t have to pick up its poop.

A few other considerations: you need thick, protective gloves and boots when working on spiny barrier plants. You may want to leave this to professionals. Don’t let your cactus fence encroach into the public right of way along sidewalks or common areas where it can hurt an inattentive person walking down the street looking at their phone or an inquisitive neighbor’s dog out for a stroll. 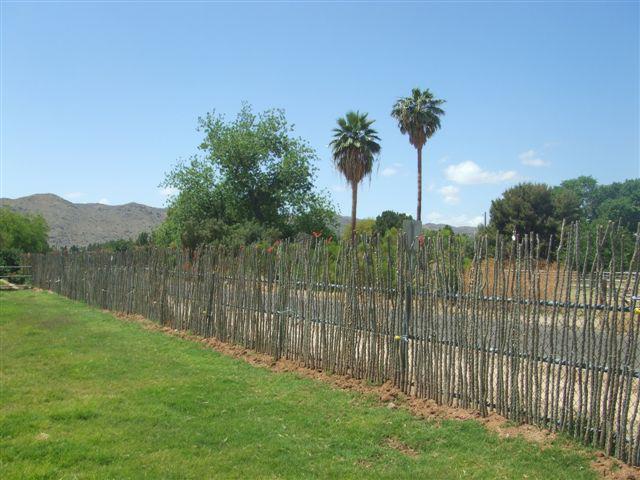 Keep your own home safety in mind, too. If you would need to get out from a second story window in the middle of the night due to fire, don’t put cactus in the path of your escape route or you’ll have some serious injuries to deal with.

I’m not going to comment about whether we need a wall at our border with Mexico. That’s for other people to decide. But if we’re going to get one and can’t stop it, couldn’t it at least be a living wall? We could at least employ this natural method of putting up a barrier in the desert, and create some natural habitat at the same time.