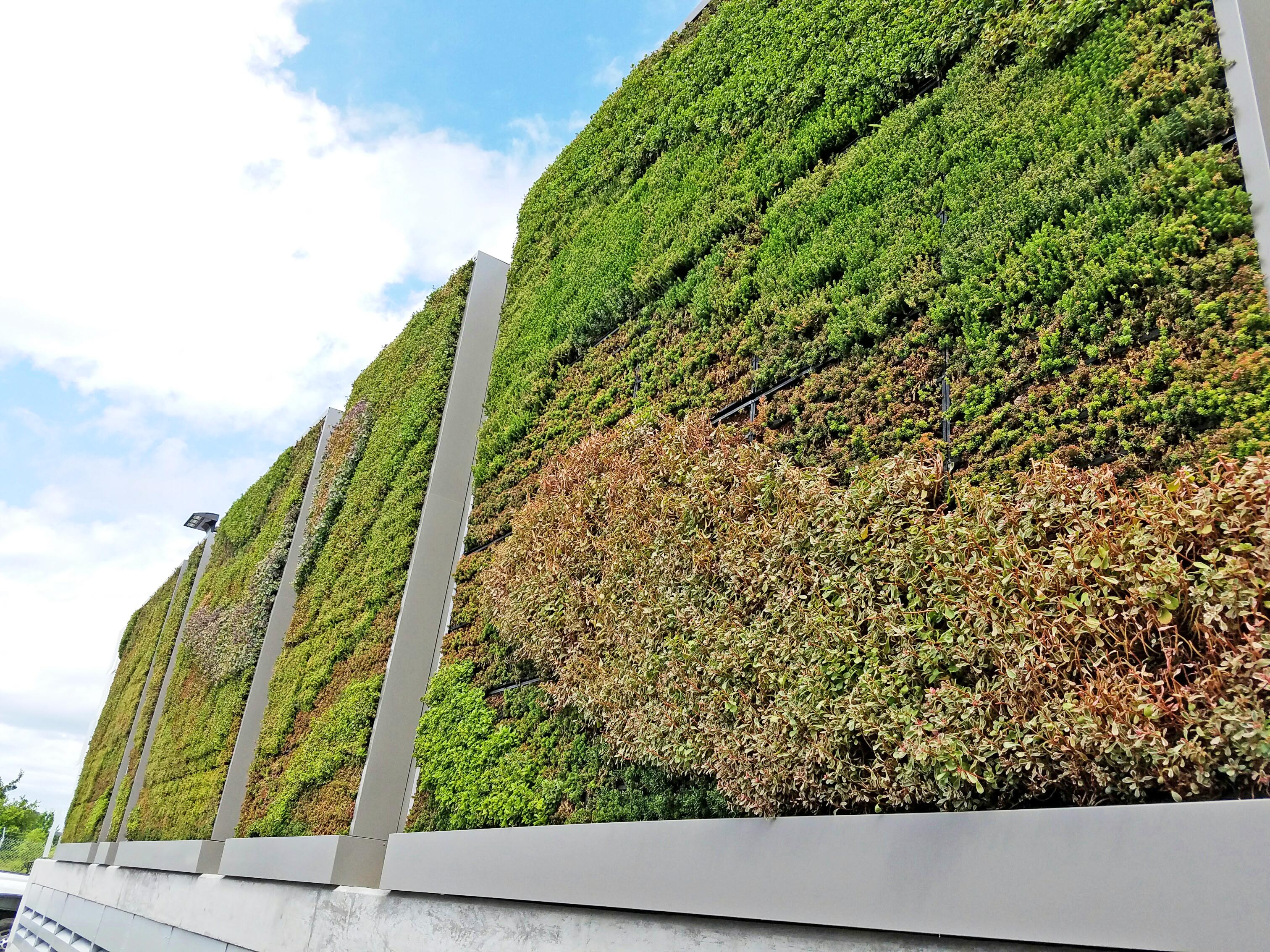 Regular blog readers know about my passion for improving our communities and our health and well being through strengthening our connection to nature. It’s amazing to me how something simple like introducing natural elements in our work environment like plants and natural light can reduce job stress and improve our health overall.

I get inspired when I see people around the world creating projects taking this simple idea and making it real. Yes, I also admit to being a little envious too, because I would love to see more projects like this in San Diego.

Several projects got a “wow” out of me and I’d like to share them with you for your daily dose of “wow” instead of a basketball trick shot or cute pet video. If they can inspire you to support new initiatives making it easier to incorporate biophilic design in your area, then we all benefit as a result. 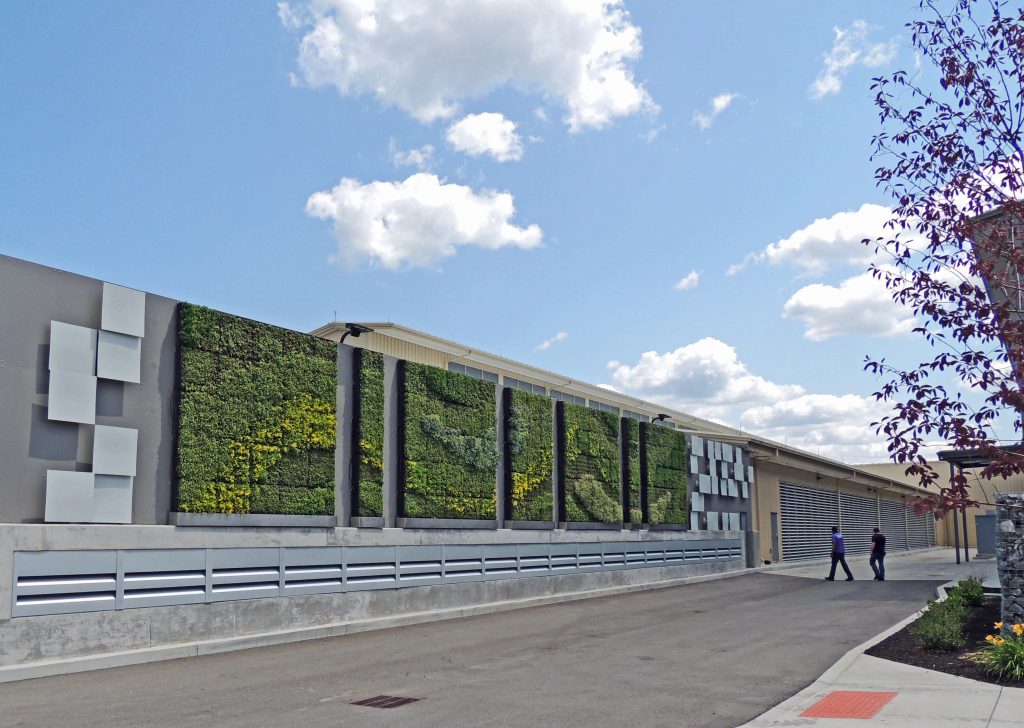 The green wall at the Yahoo “Commuting Coop” Data Center

Yahoo built its new data and call center based on the design of a chicken coop so it would provide good air circulation to keep its 50,000 computer servers cool. Because the facility is in a cool climate near Niagara Falls, there is plenty of outside air for cooling year-round. The long, low building uses 40 percent less energy and 95 percent less water because it reduces the workload on traditional mechanical chillers.

Yahoo included a living wall to contribute to the appearance of the building and add a nature-based green presence.  Our friends Melissa and Tony at Plant Connection built the wall in seven sections, 62 feet long, with a curvilinear design. Nine varieties of sedum create the pattern. 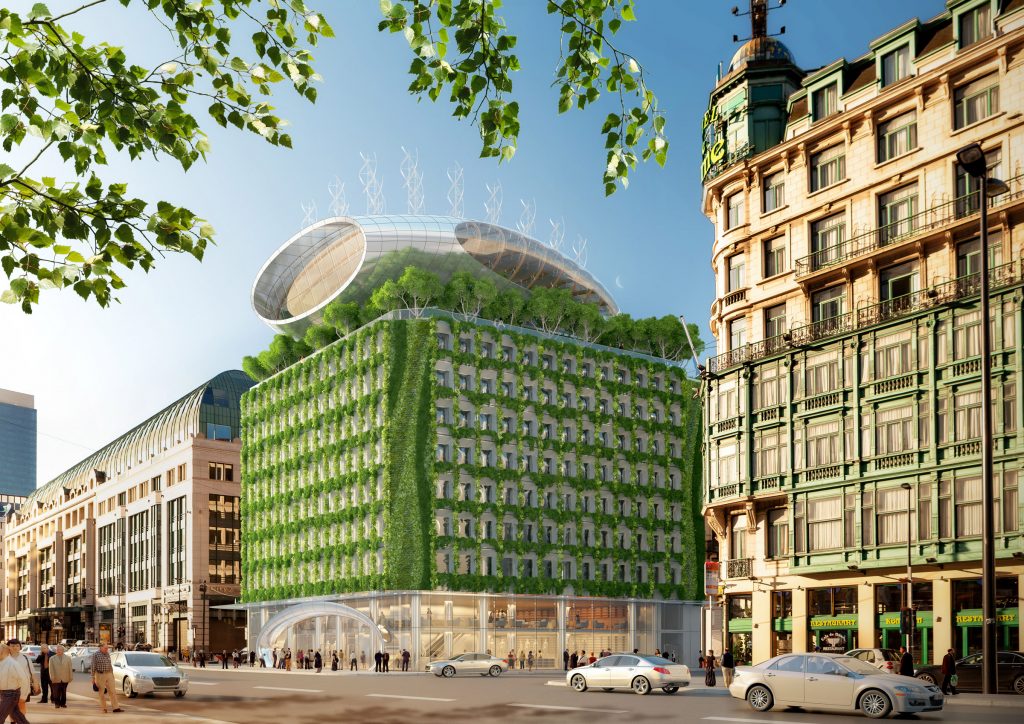 The Botanic Center in Brussels, Belgium is actually an office building named after the nearby “Jardin Botanique” (Botanical Garden). It was originally built in 1977 and needed a facelift. And the concrete building couldn’t look less like a garden! Vincent Callebaut Architectures has big plans to transform the building, The plan calls for the addition of 274 exterior planter beds up each side of the building, eventually wrapping the entire building in plants and flowers native to Belgium.

Photosynthesis by the plants will help absorb the carbon particles from urban smog. The architect says the goal is to “bring biodiversity back into the heart of the City” and select plants that will provide color, changing with the seasons. Climbing and overhanging plants will be included. Eventually there will be 10,000 plants on the building, capturing 50 tons of carbon dioxide in the Brussels atmosphere.

In addition, a new topper will be added to the building, a titanium covered “Chrysalis” which includes 12 gills to capture sunlight on solar panels and generate enough natural ventilation to turn wind turbines which will make the entire building energy self-sufficient.  The architect says, “The architectural, technical, functional and landscaping choices reflect the integration of an environmental approach into our project.

Such bold choices enabled the architects to design an “out of the box” architecture that will impact Brussels environmentally, while projecting the Botanic Center into the 21st Century. Wouldn’t you love to see something like the Mr. A’s Building in Hillcrest retrofitted like this? 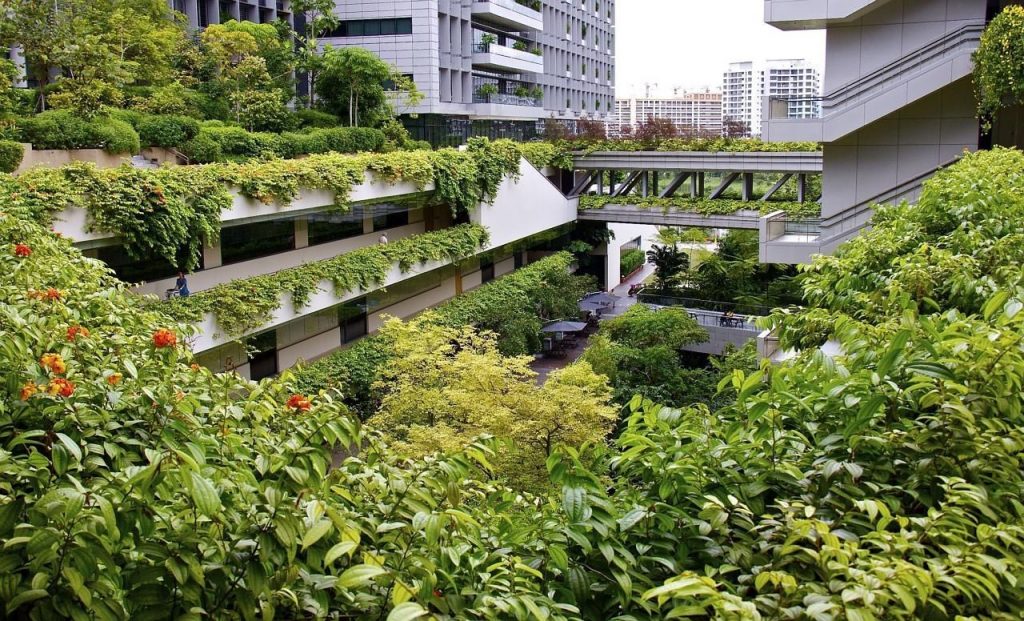 Yes. this is a hospital: Khoo Teck Puat Hospital in Singapore

I’m a big fan of integrating nature into hospitals, because nowhere is the healing power of nature more important. The green roof our GreenScaped Buildings team constructed at Sharp Memorial Hospital is a perfect example. Studies show patients recover faster, use les pain meds and complain less – all from a view of nature.

The Vinin Singapore took this concept and ran with it. The entire hospital sits in an integrated garden of 60,000 square feet worth of green roofs, living walls, atriums, courtyards, and its own lake. Yes, the tropical climate helps. It looks like anything BUT a hospital. CEO Liak Teng Lit says he wanted a building where your heart rate and blood pressure go down when you walk in, not up like in most hospitals, a building “that is a partner in the healing process.”

Singapore calls itself a garden city and as a matter of public policy its leaders believe everyone should live in a garden environment and every bit of empty land in this small city-state should be covered with nature.

My final example is really more along the lines of a lab experiment. Delos, the company that created the new WELL Building Standard, wondered whether you could create the “perfect” workspace for optimal health and performance of the employees. If you could, what would it look like and what would it include?

So Delos partnered with the famous Mayo Clinic in Minneapolis, and it moved a group of eight Mayo Clinic medical records department employees into a living lab. It’s an actual workspace where the employees perform their regular jobs every day as usual. But while they are working, the research scientists perform experiments by changing their environment.

No, it’s not as sinister as it seems. The changes are things like changing the amount of natural light in the room, changing the thermostat settings, adding background noise, or adjusting the ventilation. There are nine different “versions” of the office environment being tested and measured. There are 100 sensors in the lab and the workers wear biometric wristbands (similar to fitness trackers) that measure heart-rate, stress levels through their skin’s electrical conductance, and other measures.

The test participants said in a Nature Magazine article they don’t mind being office lab rats. They love their workspace and they hope they don’t have to leave anytime soon.

What this tells me is that none of us have to be architectural visionaries or office lab rats to improve our living and working environments. We already know that we need more “Vitamin N” as in Nature in our everyday lives. Add plants, get some fresh air, and especially in San Diego be sure you are exposed to the natural light we are lucky enough to enjoy 350 days out of the year.  If this blog post has inspired you to make one change, my job is done today.