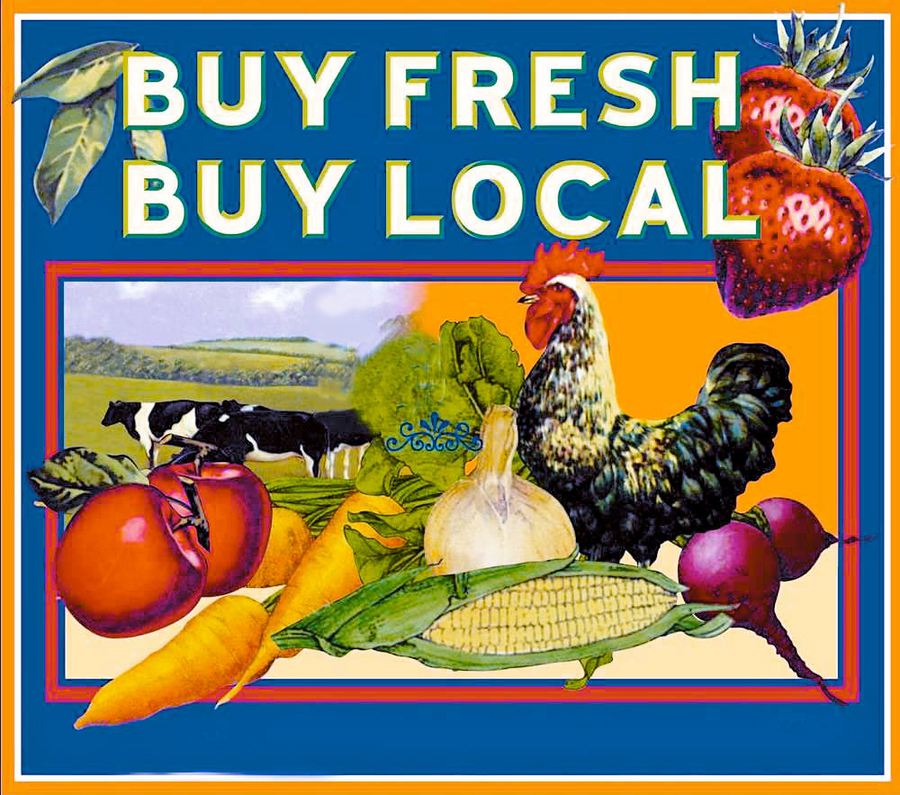 With so many farmer’s markets and other local food resources in San DIego County, it’s easier than ever to buy local food products.

We get asked a lot to create edible walls and green roofs that are roof top farms. I recently ran across this thought-provoking article, thought-provoking for me at least as a person who thinks a lot about our relationships to plants, nature and the Earth.

This research in this article shows 90 percent of all the people in the United States could eat foods grown within 100 miles of home. The study was conducted by two engineering professors at the Sierra Nevada Research Institute run by the University of California at Merced. Read it here.

Many people have talked about the need to support local food supplies for many reasons. This study is the first of its kind with data to back it up. Why is this important? Here’s an example most of you can relate to.

Most of us are used to the idea of being able to get out of season fruits and vegetables year round. It means those avocados you turn into guacamole during the Super Bowl probably came from Mexico, Peru, Chile, the Dominican Republican, or even from New Zealand.

While it’s great for your Super Bowl party, it also means those avocados had to be packed for shipping thousands of miles. Someone put them on a truck or maybe a train. They made their way to a port, where they were put onto a freighter. They were offloaded in Los Angeles or Miami, and then trucked all over the U.S.

Now add up all the fossil fuels used to get those avocados to your San Diego grocery store in January. Multiply this by all the imported fruits and veggies, meats, and other products created somewhere far away from your dinner table.

But it’s more than just the environment. There are social, health and economic reasons to support locally grown food supplies. Buying local food items means access to superior quality foods which are fresher with more flavor because they are cultivated for quality, not for the ability to last weeks in a shipping container. Maybe kids (and adults) would eat more healthy food if it actually tasted like it is supposed to!

You also have the opportunity to learn about farming practices, which builds trust in the quality and safety of the food you buy. Less stressing out about allergies when you know what sort of pest treatments and fertilizers were used.

You support local agriculture and small businesses in the community, and preserve local farming and open space by supporting the economically productive use of the land. If farming is making money, there’s no need to build houses on it. And if you have to build on the land – put a roof top farm on it!

Finally, preserving heirloom versions of all kinds of fruits, vegetables and grains preserves genetic diversity. It helps prevent a single disease or pesticide resistant plague wiping out the food supply.

Talking about growing more food during a drought might seem like a hard sell in Southern California. But many food items grown specifically for humans (not to feed livestock) are extremely water efficient, such as tomatoes. Nothing is tastier than an heirloom tomato in the summer.

Five of the top ten food trends according to a survey of chefs by the National Restaurant Association for 2014 involved locally sourced foods and sustainability. Chefs are getting it. Restaurant patrons are getting it. Time for the rest of us to get on board.

The U.S. Department of Agriculture produced a study about locally grown food, and there’s more great information here if you want to dig in.

So what part can we all play? Buy local when you can. There are dozens of farmer’s markets in San Diego County. There is really no excuse. Even at the grocery store, take a minute to check where your produce is coming from. Make the best choices possible: Mexico over New Zealand, for example. I won’t try to talk you out of guacamole during the Super Bowl. But think for a minute whether our climate change and increasing carbon footprint, and disappearance of local and family agriculture is worth it.