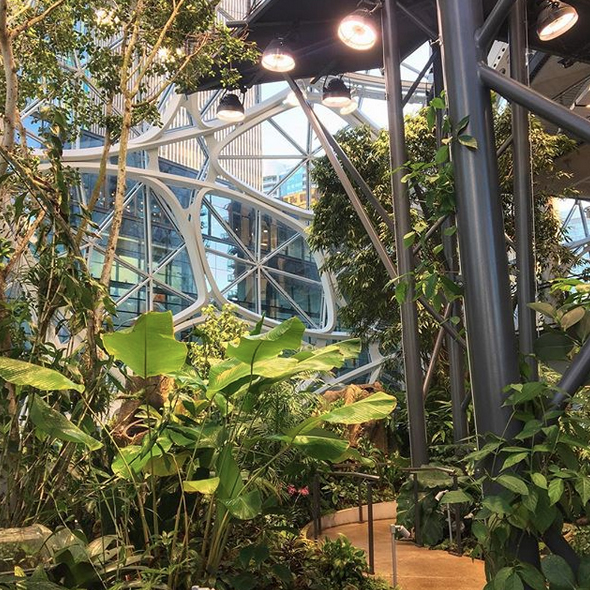 Seven years, 600 people, 40,000 plants from 300 species, and one really big Ficus tree later, the Amazon Spheres opened this week in the Denny Triangle neighborhood of Seattle. Public officials made speeches, people got their thank yous, and ribbons were cut. Because it’s Amazon, founder and CEO Jeff Bezos did the final honors with the help of Alexa, by saying “Alexa, open The Spheres.” 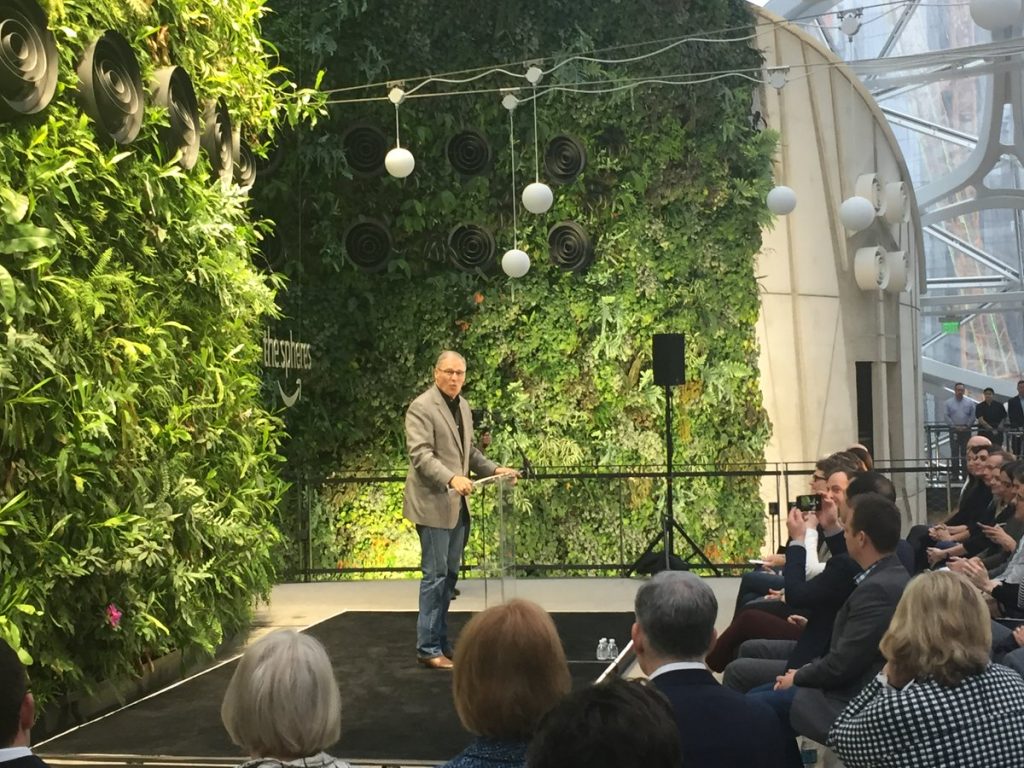 For an Eco-Warrior and biophilic design advocate like me, something like this gets me as geeked out excited as the most hardcore costume wearing fans at Comic-Con. We wrote about the project under construction in 2016.

Amazon chose to build The Spheres over the last seven years at its original Seattle headquarters with the goal of “inspiring” its employees to generate new ideas through immersion in nature and chance encounters with fellow employees that wouldn’t normally take place in such a big organization.

Along with all the plants, there are waterfalls, a river, a four-story tall living wall, walkways and what Amazon describes as “unconventional” treehouse type meeting spaces intended to spark creativity. The climate is kept at 72 degrees with 60 percent humidity, meant to simulate the Costa Rican Central Valley. Perfect conditions for plants AND people.

A closer look at the living wall inside the Amazon Spheres. Photo: Courtesy Amazon via Instagram

The Spheres will become part of Amazon’s guided campus tours, and members of the public can see a portion of The Spheres called “The Understory,” an “immersive, 360 degree exhibit,” by appointment starting this week.

While at the Cities Alive Conference last fall, I had the opportunity to walk down to The Spheres and see it for myself. Still under construction, I was unable to ‘get it’ back then. Count me in on a tour on my next trip north. 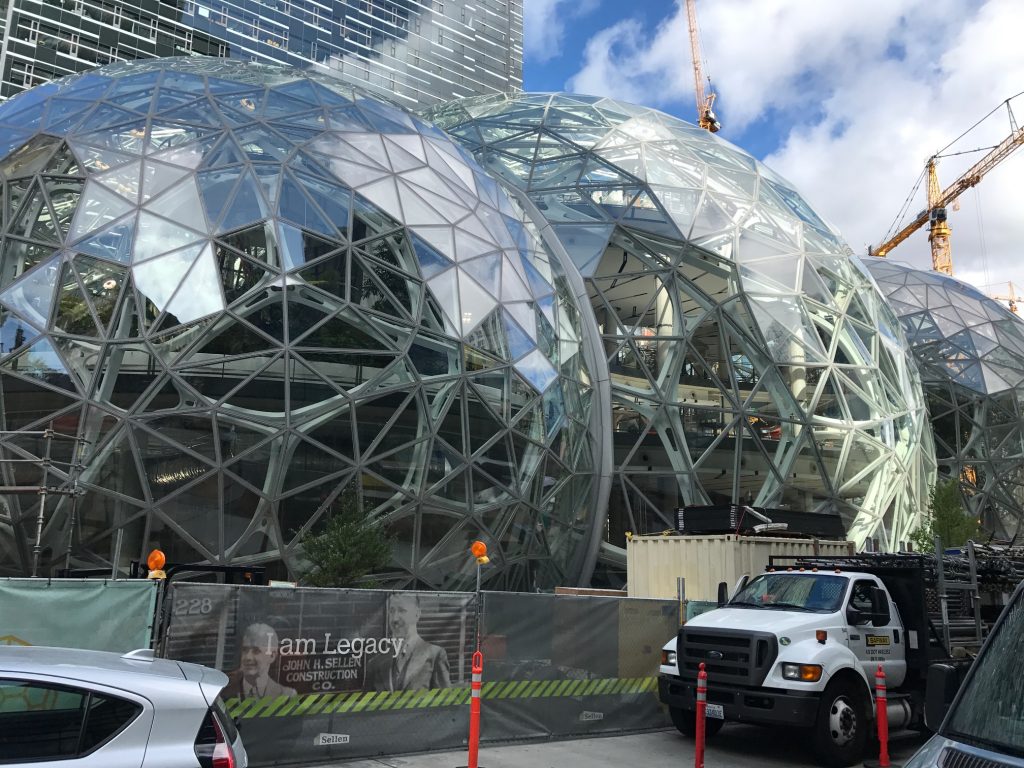 I got a look at The Spheres in summer 2017 while under construction and took this photo. Photo: Jim Mumford

Amazon invested $4 billion into its campus expansion project including The Spheres. By anyone’s standards this is a whole lot of money. No wonder cities are fighting so hard to convince Amazon to build its second headquarters in their area. What a huge benefit for all of the companies involved, from architectural firm NBBJ, to all of the contractors, horticulturalists, and craftspeople who brought The Spheres to life. 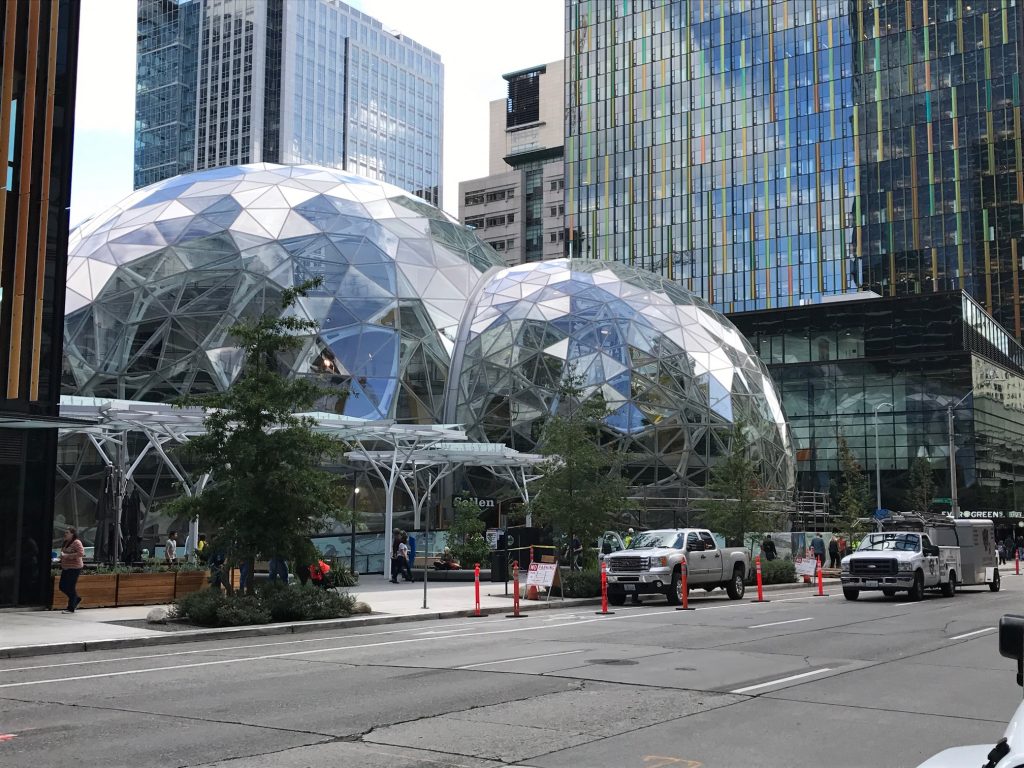 Another look at The Spheres while under construction in 2017. This gives you a better idea of their scale relative to their setting. Photo: Jim Mumford

But still, four billion dollars is a whole lot of money, even including something this amazing. If you care at all about the many problems our world faces, you have to wonder whether it wouldn’t have been better to invest some of this money in others ways. Helping solve the homelessness crisis, which is nearly as bad in Seattle as in San Diego. Or helping develop alternative fuels. Address the opioid epidemic. Save the REAL rain forests. You probably have your own list of ideas.

But people have said similar things about investing in space exploration. Sometimes it’s important for humanity to reach for something inspirational, where the benefits might not be as immediately obvious – but with immense long-term importance.

Who wouldn’t get inspired walking around this piece of a rainforest in the middle of a major U.S. city? Photo: Courtesy Amazon via Instagram

When people get the opportunity to explore and appreciate nature, they begin to understand what might be lost if we don’t step in and start preserving our environment. Walking through The Spheres might be as close as many people ever get to exploring a rainforest for themselves.

It might even encourage people to explore and embrace biophlic design, something I am passionate about, and talk and write about frequently. Amazon says it hopes to provide educational opportunities about biophilia and biophilic design through tours, field trips, and partnerships with schools and research universities.

Studies already conducted show over and over that biophilic design can inspire creativity and improve brain function. Jeff Bezos hopes Amazon employees will bring innovations to life through their exposure to The Spheres.

Amazon horticulturalist Ben Eiben discusses biophilia and how it inspired the initial concept of The Spheres:

So sure, maybe it’s a little crazy to move a 49-foot tall Ficus rebiginosa tree from California to Seattle to be installed in The Spheres. It’s even got a name: Rubi.

The Spheres also feature more than a dozen plants that are extinct in the wild or are part of ongoing conservation efforts.

The Spheres project is big news this week. It’s likely to become a major tourist attraction in Seattle for many years to come. Maybe it all seems a little crazy to you. When you are as rich as Jeff Bezos, you can indulge yourself. Most of us live and work in the real world with limitations on our resources. But we don’t have to limit our thinking.

I think of all the people, especially kids, who might be exposed to the ideas behind biophilia and biophilic design for the first time. If even one out of ten take some inspiration home, they could make a huge difference to their communities and to the planet through their own small changes. 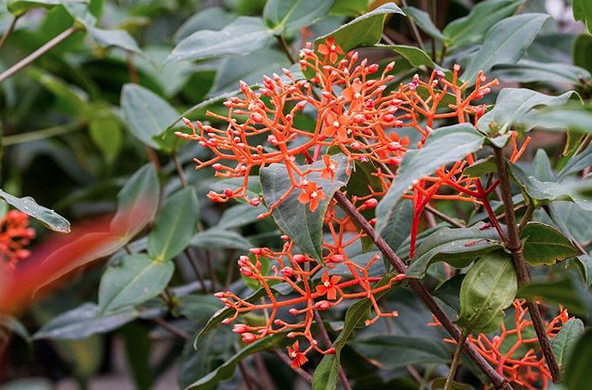 Let this tropical shrub in The Spheres inspire you to add more nature to your life. Medinilla scortechinii, boasts vivid orange flowers on orange stems, set against deep green leaves. Native to the Philippines, it can either be grown as a terrestrial plant (in soil) or as an epiphyte (grown upon another plant). Courtesy: Amazon via Instagram

How about incorporating nature into your workplace and home for a start? You might not be able to build a huge greenhouse, but how about adding plants onto your desk? Taking your lunch outside for a nature break? Going for a walk break in a nearby park for your own infusion of natural inspiration? In San Diego there’s really no excuse not to do it.

We could come up with a whole list of things from planting a tree to recycling to burning less fossil fuels, and even getting involved with local land use decisions to encourage more parks and open spaces.

We’d love to help you do it. Contact me at Good Earth Plant Company – it’s jim@goodearthplants.com if your business or organization would like me to come out and speak on these ideas, or help you consider ways to bring your own little piece of nature to where you work and live. I promise it won’t cost anything close to four billion dollars, but the improvement in your well being could be priceless.